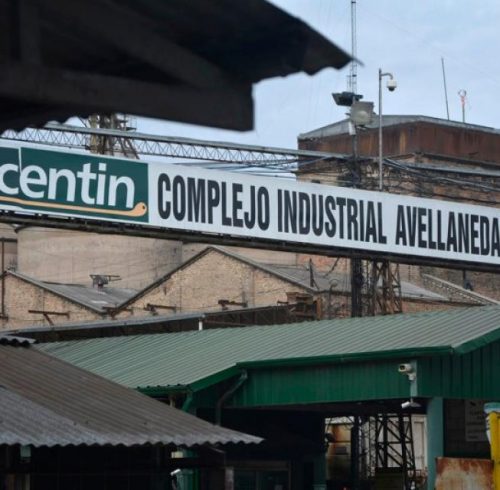 The presidential decree of intervention in the Vicentin agro-industrial and exporting company considers this company ‘of public utility’. This is a step towards the approval of a bill still to come up in Congress. The decree is a much needed socio-economic encouragement as the country inherits an unsustainable external debt from the [former] Macri government  and must now engage in relentless battle against the Covid-19 pandemic.

Vicentin, whose owner is Gustavo Nardelli and partners, is a gigantic producer-exporter conglomerate of grain, oilseed and flour. It handles 30,000 tonnes of food per day based on more than 2,600 grain producers. This company was already in decline by the end of 2019, with a debt of $1.5 billion, including 430 million with international financial entities. Indebted to its private creditors and suppliers and threatening 5,000 workers with the sack, this company is now charged with numerous frauds. Among these, the enormous funding of the Macri’s presidential campaign and the acquisition of $262 million dollars in credits from the public Banco de la Nación, granted by former director, Javier González Fraga, in the Macri era ( 2015-2019).

The last loan payment ($100 million) was authorised at the end of November 2019, after Macri’s electoral defeat, and was received a few days before the end of his mandate. Upon receipt, Vicentin declared bankruptcy and opened the appeal to creditors. The typical manoeuvre of the usurpers of public goods! This neoliberal policy is the well-known method used by several Latin American governments which have savaged all social spending, pensions, health and education to enrich the financial oligarchy.

Several investigations are underway regarding Vicentin in the judicial field through the promoter Javier Gerardo Pollicita, and in the legislative field as well. Senator Oscar Parrilli (Frente de Todos) in collaboration with a committee on institutional affairs, proposes to create a special committee of inquiry in Congress on possible irregularities between Vicentin and the La Nación bank. Legislators in the province of Santa Fe, where Vicentin is located, have raised issues to do with assets not declared abroad, in offshore areas in Paraguay, Uruguay and Panama, outside the scope and control of Argentinian justice. 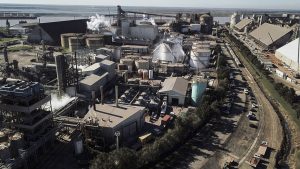 As president of Argentina, Alberto Fernandez says: “We must get implicated in this matter, because the opposite only encourages the further concentration of that market. [..] Our only recourse is to pass a law of expropriation with financial commitments. We want to save this business because there are only seven grain farmers in Argentina and four of them are foreigners. [..] We must do this because this is a world where the food issue has become central with the pandemic”.

State intervention in Vicentin has started and has proper judicial bases, but expropriation has to pass through an Act of Parliament. This expropriation is fully justified and must be without compensation. The State must not be a simple shareholder and partner who puts-in the money without deciding  anything, complicit in looting. If there is no expropriation, the big losers will be the State and the people. Expropriation is necessary to stop the present repayments, and to recover the productive assets of this company for the State’s strategic sector of the YPF-Agro Trust Fund [1], for food sovereignty and deal with the pandemic.

The government’s plan is to control the company by involving YPF-Agro. The latter is owned by YPF [2]. It currently sells fuel and trades in grain, fertilisers, agrochemicals and agricultural products. YPF-Agro would be the “control company”. With State control, the plan is to stop the concentration of foreign monopolies like Cargil and Dreyfus. The State can then participate in the planning of the agricultural and food market (including price controls), as well as in the generation of commercial dollars in the agro-exporter sector. Currently, 10 agro-exporters control 90% of the international grain sales of Argentina, most of them multinationals or joint ventures between local companies and foreign capital.

Let us not forget that this measure saves 5,000 jobs too, which is particularly important during a pandemic. Affected by the bankruptcy of Vicentin, several Workers’ Commissions in the olive-oil factories of the province of Santa Fe signed manifestos to support government expropriation. It is an audacious move by the government toward the goal of “zero hunger” and “food sovereignty” that can also stimulate and coordinate small and medium-sized family farming. The MST [3], the MPA and the PAA projects – created during the PT (Lula) governments – are the main protagonists of the struggle for food sovereignty in Brazil. This is what allows the MST today to make pandemic solidarity donations and send 15 tonnes of food to the victims of Covid-19.

The decision of the government about Vicentin has come as a surprise in a region of unfavourable governments in Brazil, Chile, Uruguay, Bolivia and Ecuador, with Unasur absent and not even meeting over the pandemic. Argentina plays an increasing protagonist role as an antidote to the pandemic. This causes the financial oligarchy and the big putschist bosses to see behind the Vicentin affair the ghost of the nationalisations of the epoch of Eva and Juan Perón, in the years 1945-50, when important sectors of the economy were nationalised, following the creation of the “Junta Nacional Granos” [4], State-control over foreign trade, the railways, the national aeronautical company, etc.
In this situation, the announcement of the expropriation of the Vicentin company creates panic in those who oppose the Fernandez government. They fear a return of Kirchnerism [5] which had already nationalized YPF, Correo Argentino, Aerolineas Argentinas AYSA and others large companies.

The Covid-19 pandemic brings to light all the rot and mayhem of the current system. However, it is no longer enough to report these. Solutions must be found urgently. Voting procedures must be speeded up for the Vicentin’s expropriation law, along with the law to tax the great fortunes and the law to reform the justice system.

We foresee that it is not going to be easy because the opposition still has an almost intact judicial and media power.

Translation the article of the blog