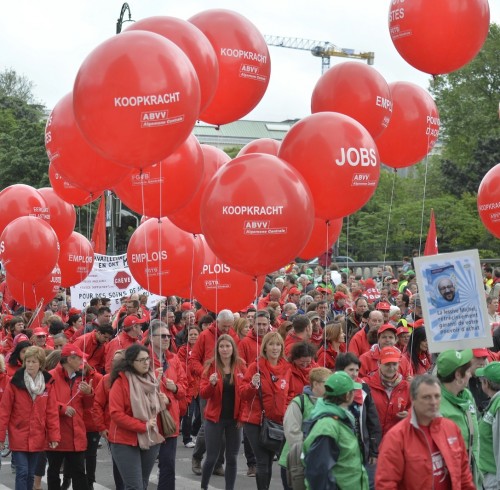 The Political role of the Trade Unions is legitimate and necessary in Belgium. The Belgian CBI denounces the political strikes.

Editorial note to the reader: The Belgian Federal Government is the executive branch of the whole Kingdom of Belgium. Its Prime Minister is Charles Michel, of the MR Party. The Reformist Movement (French: Mouvement Réformateur, MR) is an alliance between three French-speaking and one German-speaking liberal parties.

The Flemish Government is the executive branch of both the Flemish Region and the Flemish Community. Its ‘minister-president’ is Geert Bourgeois of the N-VA Party. The New Flemish Alliance (Dutch: Nieuw-Vlaamse Alliantie, N-VA, is a centre-right Flemish nationalist and conservative political party in Belgium founded in 2001.

There is also a Government of the German-speaking Community. It is the executive branch of that much smaller Community.

The Belgian equivalent of the British bosses’ CBI has denounced “the political role” being played by the Trade Unions in Belgium. It notes the political character of the  sprawling strikes these last months. Indeed, the workers do stand up for their rights: Right to social security, to less working hours, to keep the pension rights in the pension schemes. They want a decent standard of living, and a decent standard of working conditions. They want the best public services for everyone. They want the right to work. They want democratic education. They want access to equitable justice – Now you understand why the government, along with the right wing political parties and the media, come thick together to indict the workers: The workers are making “political strikes”!

But then, this right-wing government implements the policy of austerity dictated from on-high by the European Union; it makes deep cuts in the social security and pension systems. It privatises the public services. And it lowers the employers’ taxes. The capitalists rub their hand with glee, and the big bosses do not have to go on “political strikes”: The Michel government is at their beck and call.

The capitalists concede nothing at all to the workers on the other hand. Not even crumbs. Competition between the capitalists is fierce, and their scramble for profits leaves no room for ‘values’ and ‘morals’. The squalid behaviour of the capitalists towards the millions of refugees who press against the frontiers of Europe hints at the crudest of treatments that they keep in reserve for the popular masses in each of the European countries – Brexit or no Brexit.

In these conditions, the smallest Trade Union or political demand, or strike, becomes immediately political. Having logically drawn this conclusion, the workers go on demonstrations behind the cry of: “Down with the Michel government!”.

Since the workers did not bring down the government, the media concluded that: “the strike movements are running out of steam”. But wait. The start of the new political year [1] promises to be hot, as much in Belgium as in France by the way, as in the UK or Italy, indeed in each of the countries of the European Union. Regarding their main demands, the workers (with or without jobs) must compare notes between countries, since their problems are everywhere the same. What cannot be won in one single country can be won by tying up better the workers’ struggle at EU level. This is the way to deal with social dumping for instance.

A common basic programme could be as follows:

–      A minimum wage common to all the EU countries, pegged at the level of the existing highest

–      Generalisation of the open-ended work-contract

–      Construction and exercise of Trade Union counter-powers on EU scale

Indispensable unity between the Walloon and Flemish workers :

In his speech of 10 July 2016, the minister-president of the Flemish N-VA Community, Geert Bourgeois [2] said that: “[the] language border has also become a strike border, and the Flemish spit on that, and don’t swallow that … that they can’t go to work, that they don’t have free movement of persons” - VTM Nieuws, 13PM news, 10 July 2016.

Geert Bourgeois also said that the opposition between North and South within Belgium was greater today than ever. He lamented “the brutal strikes” of the Walloon Prison Guard Unions. His speeches look for divisions between North and South. They attack strikers, and they whip up the animosity of those who “can’t go to work” because of the strikes.

With the federalisation of Belgium, the public services were weakened because each sector sought to defend its own region. This happens now with the public transport companies (De Lijn, Stib, Tec). Add to this the ultra-liberal policy of the European Union, the Bolkenstein Directive of the European Commission, and other factors which dismantle the public services. The latter were brought down to their knees financially, and now they are being sold for peanuts to the private companies of the big multinationals. Now it is the turn of the Railways, the Post Office, the Water Board and the Universities.

This trend is accelerating terribly. The strong right-wing nationalist Flemish bourgeoisie dominates the Michel government [3]. The Flemish bourgeoisie is now requesting a 7th State Reform. The minister-president  [4] allows himself to insult a whole section of the population – and “the Flemish spit on that” according to him. He does all he can to divide the Flemish and the Walloon workers, with lies included. If strikes in the public services are happening, as in the prisons and the public transports, it is because regionalisation has led to the unequal treatment of the workers on either side of the “linguistic frontier”. If the workers “of the South” take more strike actions, it is due to the unequal wages and conditions between Flemish and Walloon workers.

The truth is that very many Flemish workers (plus those of Brussels) participate strongly in the strikes of the others! Throughout 2015 and 2016, all the Trade Union demonstrations were attended by Flemish and Walloon workers, and those of Brussels; along too were many unemployed, youths, refugees and undocumented.

With the ‘rentrée’ this year, one must shore up and strengthen this unity to the maximum, in all the coming mobilisations. This unity must incorporate those opposed to war and military expenditure, those who fight for human dignity and democratic rights, and all the associations that struggle for a great big change of society.

[1] In France and Belgium, the ‘rentrée’ is the political activity that starts again after the Summer holidays.

[2] Geert Bourgeois: The New Flemish Alliance (Dutch: Nieuw-Vlaamse Alliantie, N–VA) is a right of centre Flemish nationalist and conservative political party in Belgium. Its nationalism is of a regionalist and separatist kind.

[3] Charles Michel, the Prime Minister of the Belgian Federation overall.

[4] Geert Bourgeois. He was strongly criticised for his 10.7.2016 comments within his own Party, in Belgium and beyond. Von Rompuy called him : “A weak minister-president” 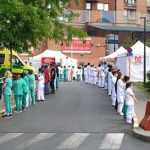