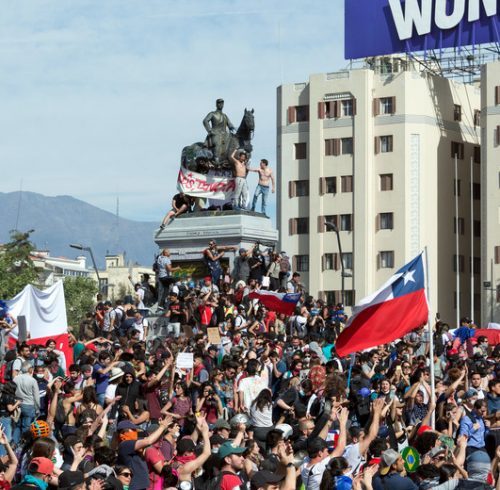 ASKED IF THE RISE IN TUBE FARES WAS THE REASON FOR THEIR PROTEST, THE DEMONSTRATORS IN CHILE REPLIED: “THIS IS ABOUT 30 YEARS, NOT 30 PESOS”. THIRTY YEARS OF PINOCHET! THIRTY YEARS IN SEARCH OF A ‘DEMOCRACY’ THAT NEVER WENT BEYOND SOCIALIST PARTY GOVERNMENTS  ALTERNATING WITH CHRISTIAN DEMOCRATIC ONES.

In the times of Bachelet, the Concertation of Parties [1] had kept the Christian Democratic Party, the Radical Social-Democratic Party, the Party for Democracy and the Socialist Party all joined up together. This is how it had won the 2000 elections. In 2007 however, Miguel Juan Pinera won government. He did it with the support of Alianza por Chile allied to the Independent Democratic Union and Renovation Nacional.

Throughout this succession of governments and Parties – of the right or of the left – the Constitution enacted under Pinochet was maintained. It was modified in 2005 and nothing more. The judicial and administrative structures inherited from the dictatorship stayed intact, not only upholding the social inequalities but sharpening them too.

In October 2019, the price for a metro ticket was raised by 30 pesos . When the student movement started to oppose this, it acted like a detonator for the other protests that are happening today. Large groups of youngsters gathered in the public transport stations, proposing to people to “Fight by Not Paying”.

These mobilisations grew rapidly when the trade unions joined in, along with workers, social movements, the indigenous people and many from the population. The government and its neoliberal policies were indicted for having pushed the people into poverty these last years, whilst inequality and injustice kept growing.

Health is mostly private, but the cost of medication is exorbitant. Besides this, a tax falls on the poorest who still use public health, and the same goes for education. For the citizens, everything public is a state of absolute precariousness.

The water reserves are in the hands of five families. These have turned this precious resource into a commodity in this country that holds a third of all the unsalted water reserves in the world.

The pension funds have been privatised. These funds are now being used by the speculators in the banking system. This robbery has brought down the pensions below 250 dollars per month. In the army where this privatisation was not introduced because it was resisted, the soldiers enjoy decent pensions. They enjoy a social security cover too, on top of being able to receive 10% of what the State recovers from its copper sales with no questions asked. The copper mines represent 20% of the country’s gross domestic product.

In the last years, housing costs shot up by 70%, making it quite impossible for a majority of Chileans to buy a home. This is one of the factors that has done most to increase inequality. The men and women of the working class earn less than 600 dollars per month.

The response of the Chilean masses was unanimous. They mobilised massively with strikes and concentrations like the one on 25 October 2019 (see featured image) where more than one million people marched in Santiago. Assemblies were then set up; local governments were organised and platforms regrouped the working class, the student movements, the social movements, all the sectors of the exploited.

The government put its repressive machinery into motion. The army and the police came out harshly and brutally to stifle this popular force and its possible economic effects. This did not stifle the demonstrators much, however. The latter kept demanding the fall of the government and the holding of new elections.

A Constituent Assembly with delegates elected from below:

Pinera tried to hide his impotence behind a government reshuffle. He demoted ministers. He sought the help of judicial measures. He called for a Round Table of dialogue ‘with all the parties’. He proposed a referendum for April 2020, and then a vote for a Constituent Assembly in October next year.

Large layers of the students, the workers, the Communist Party and others rejected the Pinera’s offers. They want a Constituent Assembly right now, and with delegates elected from below. They want a new Constitution capable of democratising the country, capable of taking control of the natural resources to make these serve the citizens.

The hymn of the Popular Union (El Pueblo Unido jamas sera Vencido) was sung in the squares, the streets, the airports. This was a way to recover the most elevated and profound experience ever made in Chile, the experience made in the times of  [..] Salvador Allende.

A programme of nationalisation and economic transformation must be included in the elaboration of the New Constitution. Thanks to the leadership that Hugo Chavez gave, the Constituent Assembly of Venezuela is now blazing the trail of a revolutionary road. This experience is part of the forces that sustain the Chilean masses in the fundamental change which they are impelling.

The great uprisings happening now in Ecuador, Bolivia, Chile, Colombia, form part of the anti-imperialist resistance and struggle in Venezuela and Cuba. Not to overlook the mobilisations that contributed to the liberation of Lula in Brazil, or the victory of the Frente de Todos in Argentina. In the whole of Latin America, there is a rebellion against the policy of the IMF, the plunder of the multinationals and the criminal policy of the United States.

One needs to respond to this situation by organising the social forces and creating  dual-power organs of mass participation. The aim must be to get society transformed with nationalisations and an anti-imperialist United Front, to let all the peoples of Latin America embark upon the road of progress.

[1] The Concertation de Partidos por la Democracia amounted to a front between Centre and Centre-Left political parties. It was created in 1988.

The featured image is Chile’s one million people on 25.10.19, TeleSur.