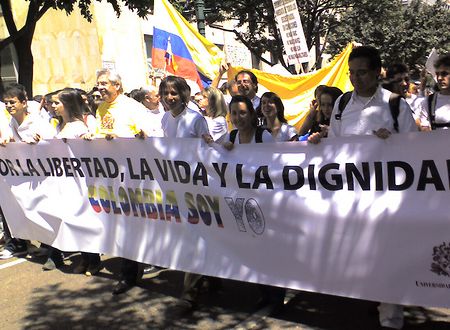 COLOMBIA: PRESIDENTIAL ELECTIONS AND THE PROGRAMME TO TRANSFORM THE COUNTRY –

We publish below two extracts from our correspondent in Colombia. The first, from April 2018, is about the accords signed in 2017 with the FARC. The second, from August 2018, is about the presidential elections won by the representative of the oligarchy Ivan Duque, but where left-wing Gustavo Petro won an important share of the votes in the second round. The document makes  programmatic proposals necessary to the progressive transformation of the country.

April 2018 – The accord signed with the FARC in Colombia :

The accord signed with the FARC (1) triggered a movement of public opinion which impacts strongly on the disputes around the coming presidential elections. Fearing a development of a Castro, or of a Chavez type, the right-wing harass the left-wing candidate Gustavo Petro. The latter is an ex leader of the M19 movement who has also been Mayor of Bogota. Gustavo Petro commented in an interview: “I must win, or they will kill me“.

One must increase the possibilities to bring change to the country – after 100 years of failures from the Liberals as much as from the Conservatives. This has driven the population into an abstentionism of over 50%. The campaign of Gustavo Petro must help overcome this ingrained tendency, and win at least 10% of the abstentionists. His programme is not socialist, but it focuses on the lands kept improductive by proprietors whom he proposes to tax in order to finance social development.

The seven US military bases in Colombia were part of an accord signed by ex-president Pastrana (2) under the pretext of controlling the drug trade (coca). But this trade is at its most flourishing! Every 25,000 hectares produce 70 tons of coca, i.e. 25 million dollars internally and 300,000 dollars in the United States. And there are 250,000 hectares under cultivation. As a commodity, coca interests high finance and the banks. Its external trade brings large amounts of dollars to the internal market.

The guerrillas have defended the cultivation of coca by the peasants, charging them a tax to get it distributed. Now imperialism uses [the existence of] this trade to pressurise the Colombian government into extraditing to the United States the FARC leaders who signed the peace agreement.

The bourgeois dictatorship being imposed on Brazil against Lula, and the process developing there, augur the end of bourgeois democracy. Evo Morales of Bolivia calls this ‘the new plan Condor‘ by manipulation of the judicial apparatus. The bourgeois whittling away at the democratic rights in the capitalist system must be confronted by a deepening programme tending to Socialism, correcting its errors on the way. This is how the Bolivarian revolutionary process is being consolidated in Venezuela. The latter is achieving this by applying the dictatorship of the proletariat via the mobilisation of the people. Even the anti-imperialist Chavist military supports this.

Venezuela and Cuba must help integrate the whole of Latin America with an economic plan to eliminate the hunger and the suffering of the populations.

The 8 million votes for the left candidate Gustavo Petro have a historic significance. They are a victory for the social movements. They are a challenge for the power of the Colombian oligarchy. Colombia advances within the incorporation of the social struggles in Latin America where the experience of many countries that installed progressive governments – by supporting themselves on the popular struggles – is being transformed into anti-imperialist and anti-capitalist movements.

Through their candidate Ivan Duque, the oligarchy got only 10 million votes all counted – most of them which they bought. These people defend a State that the oligarchy has confiscated over the decades. They carve out the public posts between them, along with the contracts and the sinecures – legal and illegal – paid for by the majority of a population otherwise kept in poverty. But this vote (the 10 million) is only 25% of the total. It is a minority, even if the bourgeoisie goes on imposing its way of distributing the riches produced by the whole population.

The positive result obtained by Gustavo Petro can further unite the parties and the movements – going from the Centrists to the Left – and with the support of the population. This can be done by aiming the struggle towards change and social transformation. More equality for instance, and unity with the struggles of the other peoples in Latin America. For a free and independent Latin America. In Colombia, the economic and military dependency on imperialism must be broken.

The struggle to build a political, economic and social force must continue. It must tend towards an economic planning that answers the needs of the population. The agrarian and urban reform – which  collapsed as people moved from the countryside to the towns – is still central to the equilibrium of the productive forces. It has to be integral, with technical support added, to create productive and self-sufficient lands.

The cooperatives must be joined up by efficient transport systems to send the produce to the population. One needs to return to family holdings of one hectare, or a surface sufficiently productive to derive  a sufficiently dignified life and earning. Family agriculture must be able to combine with the commercial coops, or use barter, to show to people that it is possible to live on the land.

Depending on the needs of agriculture, there is a fundamental role to be played by the Universities and the schools, if they are used better than now. They must help with technological support, technical aid and elements of knowledge. They must play a part in the functioning and the management of the water reserves, to produce first-class water, to control the lands and the seeds, to control the products and their diversity, for a better productive capacity, etc. They must take part in the protection of the natural environment, the insects and the birds, through specific studies in every case. Science must be put at the service of a harmonious relationship with nature, with the aim of developing and improving the conditions of agriculture and farming.

One must revive the railway project kept forgotten these last 100 years, with stations every 20kms. The railway is needed to carry the agricultural products and the goods resulting from their industrial transformation. Panama became independent from Colombia in 1903. When the oligarchy of the country sold the Panama canal – and the whole of Panama – for 25 million dollars, the oligarchy in Colombia accepted to bury the railway, the tunnel of La Linea included. That was to stop it competing with the canal. The oligarchy, the Liberal and the Conservative parties, took decisions that caused a rush for the land, exacerbating scarcity and mortal wars to the finish.

The right-wing national front of today in Colombia is re-enacting the same old story of assassinations and massacres; it is the story of the harassment of the people and those of its leaders who struggle to recover the lands stolen from them and ransacked by the army’s paramilitaries. The popular struggle in defence of the land and its restitution must be the aim of the 8 million of Colombians who voted for Gustavo Petro, the women and the men, of the towns and of the countryside. Not just to survive, but to make human progress.

Starting from the “March for a dignified Life, Peace and Social Justice” – that has been called nationally for the 7 August when the new president Duque is to take over –  we must consolidate the encouraging electoral result. We must form an organised majority capable of mustering the necessary force to change, transform and overcome the oligarchic and bourgeois customs: to build a better life, more human, more egalitarian. To give to this people which never gave up, better conditions in which to live and to progress.

(1) : FARC – Revolutionary Armed Forces of Colombia, set up in 1964 in Colombia by Manuel Marulanda and Jacobo Arenas. It lasted until 2017 when it disarmed to become a legally recognised political Party, the “Common Alternative Revolutionary Force“. In these August 2018 elections, the UP, Patriotic Union, composed of previous elements from FARC and the Communist Party, supported Gustavo Petro through the List of Decency.

The M19 is a guerrilla movement founded in April 1970. It became the second largest such group in Colombia after the FARC. It de-mobilised in 1988, after having unsuccessfully sought support from the East German Workers State (and others).