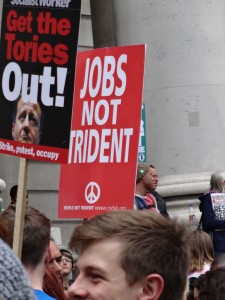 THE BRITISH PUBLIC REJECTS THE MODERNISATION OF NUCLEAR TRIDENT –

Trident is a weapons system based on 4 “Vanguard class submarines”, each armed with 16 Trident II “submarine-launched” ballistic nuclear missiles.

Trident (sited in Faslane, Scotland, and mooted for a possible move to Wales) is now obsolete. The cost of its decommissioning and replacement – to be borne by the taxpayer – is likely to exceed £200 bn.

Faced with growing unease in Britain about the purpose and costs of this weapon, the ruling Conservative Party led by David Cameron intends to have the Trident renewal agreed through a vote in parliament in a few weeks.

In preparation for this vote, and in order to take a position on the Parliamentary Defence Select Committee, the Labour Party leadership is holding debates and consultations. The support for the general anti-Trident position of Corbyn grows in local Labour parties and trade unions, and it exists even in the House of Bishops and in some senior military personnel.

J Corbyn wrote argued documents against Trident for years, but he has recently suggested his willingness to see Trident submarines built “if they are not fitted with nuclear warheads”. He probably wants time to explain his ideas about the reconversion of the arms-industry to preserve workers’ jobs. The tenuousness of this proposal however shows how very little room for manoeuvre he has in the upper Labour and Union circles. It shows also how urgent it is for him to give political power to his working class support.

Jeremy Corbyn has always adovocated a “long-term [nuclear] disarmament strategy by the USA, Russia, China, France and the UK”. He insists on the de-nuclearisation of Britain, and this could explain his idea-compromise of new but disarmed Trident submarines.

Aware that at least 11,000 highly skilled jobs depend directly on Trident’s renewal, J Corbyn has produced documents where his goal is to have the armaments industry converted “so that engineering and scientific skills are not lost, but are transferred into more socially productive industries”.

When J Corbyn argued against the bombing of Isis in Syria, D Cameron denounced him as “a terrorist-sympathising, Britain-hating ideologue” who represents “a threat to our national security”. The antagonism of the capitalist class towards J Corbyn is extreme and menacing. Capitalism intends to make the idea of ‘de-nuked’ Trident submarines more difficult than the overthrow of the capitalist system itself!

Corbyn’s compromise announcement came to the general public in the form of rather risible headlines, and no mention of his repeated and recent addresses to the Trident workers: “the workforce in the defence industry will have ideas about how the innovations you work on, and the skills you have, can be adapted to other social uses”. The Party needs its own media.

The case can be maintained against Trident however

For all its ill intent, this attack did not improve the Cameron’s case. An anti-Trident feeling is strong, and rising in the population, the trade unions and the Labour Party social base. The Peoples Assembly, Momentum, CND and StW are preparing big anti-war and anti-Trident demonstrations. As the government rushes through all its anti-human bills, it shows its desperation to profit quickly from its ephemeral majority.

The ordinary population sees that hunger has returned to the country, and rickets among the children. The NHS is being denied expensive but proven drugs for rare cancers; the country is left un-defended from rising seas and worsening floods, but huge amounts of money are found for wars which bring death to the world and with sequels against Britain.

There is a good case for J Corbyn to stand firm against Trident. The 200 billions are only an estimation, but the total cost of Trident may be much higher due to State and commercial secret prevailing. This amount is to be spread over several years, but the money still comes out of the taxpayer’s pocket, and not out of the armament multinationals and their profits.

There is a good case to be made against Trident considering that its supposed deterrence is a phrase to suggest that it is only a means of defence, whilst it is a tool of intimidation, menace and threat aimed at the semi-colonised world, to make it accept the imperialist world order, and to threaten it of ‘consequences’ should it arm itself against being invaded, like being bombed, robbed and ‘regime-changed’.

The idea that Trident is independent is a lie through which British imperialism wants to think that it still ‘rule the waves’  –  whilst in fact, the US controls all its military bases, communications and intelligence. And the reverse is not the case. CND explains how this has gone on for so long that Britain sees it as normal to simply follow US foreign policy.

The power to resist is in the working class and masses

Because the process of decommissioning the present Trident is going to take a fair number of years, there may be an expectation of enough time for the Labour Party to refine its case against Trident, and convince the working class that jobs will not be lost in the process.

To propose the reconversion of the armaments industry in Britain is very positive. It is not possible to do this immediately, but it is correct to draw attention already to the means by which the economy will eventually be made to serve the needs of humanity instead of serving the purposes of competition and war.

The situation in Venezuela is different from that in Britain of course, but it evokes what happens in any country where the government is not to the taste of the capitalist class. In Britain, the re-conversion of the defence industry must confront the vested interests of the armaments multinationals. But it must also confront the multinationals of finance. To keep the nuclear warheads separate from any Trident submarine, as suggested also by Emily Thornberry, one needs the power to do so.

The Labour leadership needs to more direct roots in the working class and the trade unions. It needs to develop militant cadres in the anti-war groups, in the political parties of the left, the Peoples Assemblies and Momentum for instance. It has scope for development in the anti-imperialist resentment of the various nationalist movements of the country. There is a lot of support at large for not renewing Trident.

The right for the Labour Party to campaign and organise directly in the places of work must be won, particularly since it has committed itself to recruit trade union members as individuals. The lessons of INEOS Grangemouth must be drawn in the Labour Party. One of these lessons is that the Labour Party must be put on a new footing.

Capitalism is losing control. The possibilities of tomorrow cannot be judged by those of today. The time is coming when survival itself will depend on controlling the economy and finance. Only the working class can do that in defence of life.

The compromise on Trident that J Corbyn felt compelled to make shows how hemmed-in he is between the pro-imperialist structure of the Labour Party and the compromising, timid and conservative trade union leaderships.

There is no reason why Labour cannot organise a recall Labour Conference specifically to oppose Trident. Inviting there not the Trade Union leaders (at happened under Milliband), but all the trade unionists and community activists under the banner: “Oppose Trident!”. 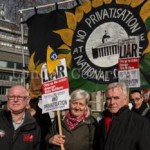