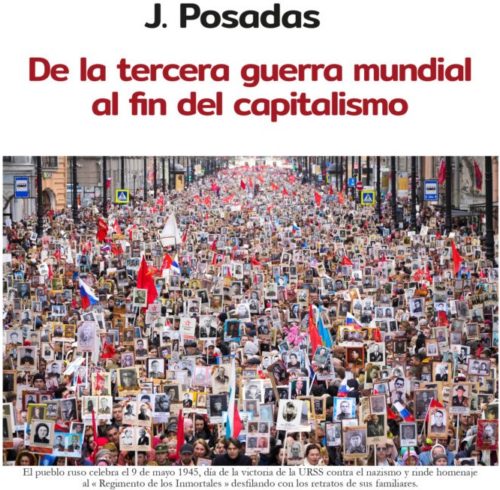 This book is titled: “From the third world war to the end of capitalism” launched in November 2022 for the 18 International Bookfair of Venezuela in Caracas. It contains a selection of texts by J Posadas from 1970 to 1981. It also contains the 1939 text by Leon Trotsky ‘The USSR at War’.

The current war situation in Ukraine provokes many debates, as happened in Trotsky’s time when the 2nd World War broke out. Thus, it seemed very important to us Editors, to return to this theme from a Marxist point of view. We present in this book several texts by J. Posadas on the fundamental question of the inevitability of war on the part of the capitalist system, and consequently the inevitability of a Third World War.  So the need is vital for humanity to end the capitalist regime and go for economic and social transformations towards socialism. This can only become live on the scale of the world.

The selected texts are taken from multiple conferences by J Posadas from 1970 until the year of his death in 1981.  We have retaken them from books that the ISCPEs already published, like: “The Soviet Union“, “Workers’ State and Socialist Society“, “The Crisis of Capitalism, War and Socialism“.

We publish also Leon Trotsky’s text: “The USSR at war” of 25 September 1939.  That was around when the Soviet Army began to occupy Poland, Finland and the Baltic countries, and the Stalin government signed the «German-Soviet Pact».

This reading helps greatly to compare the Soviet policy of those days with the current Russian military intervention in Ukraine.

This is the cover of the book in Spanish, pending the English translation.