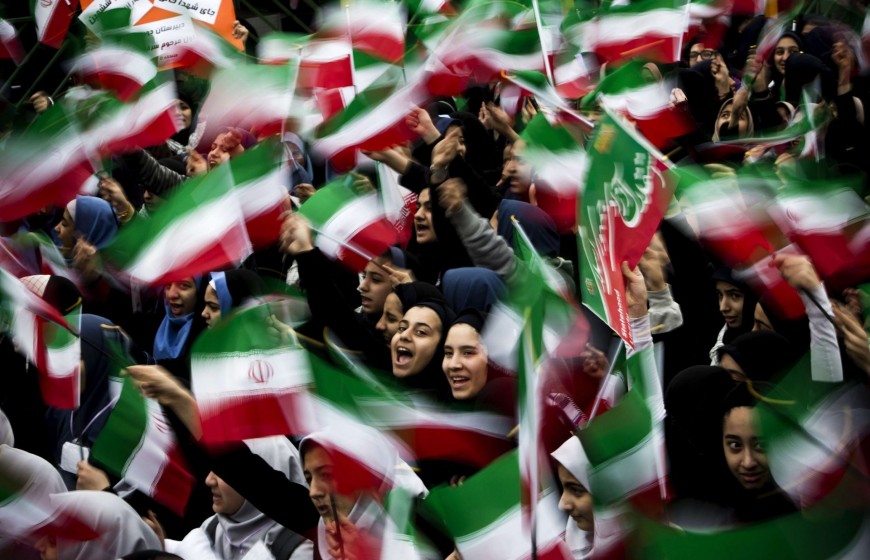 THE IRANIAN REVOLUTION IS AT THE CROSSROADS AFTER THE JULY 2015 AGREEMENT ON THE NUCLEAR QUESTION.

This is what Iranian comrades explain below, through various texts which we have summarised:

Fog on the so-called ‘historic’ nuclear accord with Iran:

After manoeuvres and secret ploys, the text of the nuclear agreement was made public. It showed that the Iranian negotiators consistently overlooked their own ‘red lines’ and ignored the warnings of Ayatollah Khamenei, leader of the Revolution and chief of the army.

According to the text, Iran should stop supporting revolutionary organisations like Hezbollah in Lebanon, Hamas in Gaza and the Houtis in Yemen – but Khamenei insists that Iran will continue to support revolutionary movements in the Middle East and the world.

The accord expects Iran to stop testing ballistic missiles for 8 years, place no satellite in orbit or train any human being for space; this has not stopped the Iranian army from sending up a new missile however, and matters are not likely to stop there.

The text of the accord stipulates that all the missile sites of Iran, and all its military sites will be subject to “surprise inspections”. Several Iranian military commanders have declared their intention to throw molten lead at anyone – North-American or otherwise – who tries to penetrate the sites.[1]

The fundamental role of Russia in support of Iran and Syria:

Iranian websites publish that Putin threatened the Arab Emirates (UAE) with 1,500 km (range) Russian missiles. That was when the UAE were supplying 2,000 US Stainer missiles to Daesh in Syria (also known as IS) via Turkey.

The [right wing] Iranian Minister of Transport and Urban Development, Akhundi, wanted to ban the Russian Sukhoi planes from Iranian airspace – but the Iranian military overruled this. And the Russian missiles launched from the Caspian Sea were given permission to cross the Iranian (and Iraqi) skies.

Ayatollah Khamenei referred several times to the occurrence of a possible “inflection point” in the Revolution. Like Ahmadinejad, he trusts in the final and religious victory of justice over injustice; but when he speaks of “an infiltration of the Revolution by the enemy disguised in Islamist clothes’, he clearly alludes to prime minister Rouhani and his entourage.

The two governments of Ahmadinejad (from 2005 till 2013) fought against all the previous leaders who pretended to continue Khomeiny but followed Rafsanjani by growing increasingly aloof from the bases and principles of the 1979 Revolution.

Ahmadinejad was elected twice with the support of Khamenei and that of other currents in the popular masses. This is how he stood up to the mortal danger facing the Revolutionary State. During the last two years of his government, however, Rohani and Ali Larijani paralysed him and boycotted every one of his economic measures. Their aim was to hand the country over to the imperialist multinationals[2]

Is the revolutionary process of Iran reversible, or not?

The first thought of the Rouhani government was to scrap the social measures of Ahmadinejad. More than 3,000 civil servants were sacked, and replaced by Rouhani’s followers. He devalued the national currency and broke relations with the other Revolutionary States, like Venezuela. He encouraged factory closures, paralysed national production and handed over new contracts to the ‘Seven Sisters’ (7 oil multinationals). He offered Iranian gas to the European governments in replacement for the Russian gas blocked in Ukraine by Exxon Mobil and others. The nuclear talks served well to cover up the unrolling of this project.

The oil contracts are now being negotiated most discretely. Foreign companies are being offered 20-year leases for exploitation rights, and some even get the property of the oil-deposits into the bargain.

The declaration of admiral Shamkhani to denounce imperialist infiltrations and activities hostile to Iran, amounts to an attack on the Rouhani government. This marks the start of a new phase of confrontations[4]. This government may not get a second mandate, or even finish the present one[5].

Khamenei continues to denounce the United States as Iran’s enemy. He says that the nuclear agreement must now be used to retake control over the future of the Islamic Revolution, and that the Revolution must continue to defend the oppressed and those who fight imperialism in the world. He recently held meetings with top military leaders, as well as with all the Iranian ambassadors posted abroad, where he explained that the next military manoeuvres must not be simple exercises but acts of war. He said that the tactics of the country must not change with every government, but fall in line with the strategy of the Islamic Revolution. He also denounces that, since the signing of the accord, imperialism has been trying to penetrate every post of military command.

The new phase of confrontations

GDP is plunging and the economic degradation is huge. There are prolonged spells of paralysis in many factories and growing mountains of unsold goods. The unemployed are 2,5 million. With the general state of inflation, purchasing power nose-dives. Interest rates are now at 25%. Prices are rising for gas, water and the oil at the pump. The liberalisation of imports brings in an avalanche of goods for mass consumption, cosmetics, non-alcoholic whisky, McDonalds, American cars, etc.

We are entering a new phase of confrontations where the government appears cornered, surrounded and bound for early failure. There is also the pressure of events happening internationally, and in the Middle East, as in Syria, Iraq and Yemen.

The few aspects we have considered here point to a process of polarisation where the Rouhani government is supported directly by external and imperialist forces, whilst Khamenei enjoys the support of the masses, of the military and of revolutionaries.

[1] The Iranian government’s negotiators involved in the talks tried to circumvent Parliament. They were supported in this by members of the presidential team in parliament. These people worked to keep everyone in the dark because parliament had promised to ‘cut the hands of those who sign a bad agreement’. In the divergent declarations of the final agreement, many MPs and academics saw an act of deliberate deceit.

The ‘red line’ – many times insisted upon by the circles around Khamenei – was this: the talks and the eventual agreement will bear solely on the matter of the peaceful use of nuclear energy, and no debate should stray beyond this. The number of Iranian centrifuges was therefore out of bounds, and no curtailing should apply to the generation of electricity in Bushehr or in the Persian Gulf. This applies to every other country as an un-disputed norm of international law, and no-one has the right to interfere with the military defence of Iran.

On the terrain however, and despite the negotiators’ reassurances, the talks focused from the very first on the application of a certain Additional Protocol which included the inspection of Iran’s military installations. Because this is so inimical to the progress of the Revolutionary State, the Rohani government sought to hide it behind the fog of secret diplomacy. All the talk about nuclear energy was therefore an excuse to hide actions to derail and roll back the Revolutionary State. This deceit is heavily class orientated, neo-liberal and counterrevolutionary.

[2] The socialist-orientated measures of Ahmadinejad had grown with time, triggering the adverse reaction of conservative leaders and their circles. These embarked upon a fight that led to the election of Rouhani, but it was Rouhani who won, and not the conservative fundamentalists. Rouhani had been government Minister under Khatami. Along with Ali Larijani, Khatami had made concessions to imperialism to the point where capitalist counter-revolution started showing up in the shadow of Rafsanjani. This culminated in the reactionary upheaval of 2009 when the Islamic Republic was dragged to the very edge of collapse.

[3] Under the presidency of Ahmadinejad, Iran had become self-sufficient in diesel oil. Now diesel is imported, and it is low grade. As Rouhani and his government bend the knee to the Chamber of Commerce, cooperation with the countries of Alba (Bolivarian Alliance for the Peoples of our America) has ceased. Trade is back with the big imperialist multinationals. During the ’nuclear’ talks, Russia and China gradually stopped attending the meetings because the Iranian diplomats kept turning and twisting senselessly. This is now endangering the agreement passed previously with Russia for the construction of desalination plants and new nuclear power stations to produce electricity.

[4] The entire economic programme of the Rouhani government is liberal. Its blanket privatisations and deregulations on Thatcherite lines violate the Iranian Constitution. The liberalisation of imports and exports brings inflation, enormous price rises and a free-fall in the workers’ purchasing power. A third of national production now involves smugglers. Four ministers have rebelled against the monetary policy of the government – one of them the Defence Minister himself.

[5] With the help of their Iranian associates and collaborators, all manner of spies and snoops linked to imperialist networks are spreading throughout the country. They penetrate commanding posts through cyber-technology and the internet, but some have recently been jailed. Trials have started to stop oil contracts handing over underground property-rights. The Minister of Petroleum, Biyan Zanganeh, has been caught for his part in signing a gas contract at give-away price with the Emirates.

The featured image is of Iranian women students on the anniversary of the Iranian Revolution in 2015. One placard says: “We miss the martyrs of the revolution”. 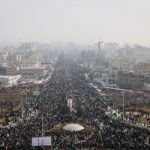