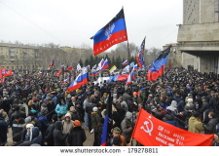 THE MINSK ACCORDS AND WESTERN ROUT IN DONBASS –

The Annual National Holiday and Celebration of Soviet Red Army Day took place both in Russia and in parts of Ukraine on 23 Feb 2015. The Guardian of 23.2.15 reports that in Donetsk, that particular day “was decidedly Soviet” – with Soviet flags beneath Lenin’s statue, Soviet poetry, and Soviet songs by Joseph Kobzon (now under Western sanctions). Denis Pushilin who spoke for the Peoples Council of the Donbass Popular Republic said “Our guys are worthy of the memory of our grandfathers who once drove the fascist scourge out of Donbass. Now they are doing the same”.

The recovery of Delbatsevo by the militias of the Popular Republic of Donbass has been possible because the Ukrainian army refuses to fight its own population. This is a very serious reverse for the Poroshenko government as well as for the leaders of the European Union, the US and Nato. Besides this, the elements of regular army sent by Kiev to the Donbass meet a very staunch popular resistance in Eastern Ukraine (see the testimony at the end of this article).

The Federation of the Popular Republics of Donetsk and Louhansk was set up in April 2014. It now leads a determined fight against the military of the governments that followed the Kiev’s coup in Feb 2014. In what the media called “the first anniversary of the Maidan Revolution”, the European governments did not come in triumph because their efforts to turn European ‘public opinion’ against Russia had failed. Now, all their anti-Russia sanctions work against their interests, depriving them of the markets and economic accords they desperately need to ‘restart’ the deeply depressed European economy. Nato’s ‘partnership with Ukraine’ is a great failure too, because it does not manage to re-format the Ukrainian army for war aims against Russia.

It was in the area of Delbatsevo that the MH17 was brought down.

It was there that the Kiev special military units came down in force to attack the region and retake it. They could then recover the crash fragments and dispose of all the clues likely to establish responsibility. Delbatsevo, besides, is also an important hub for the Donbass popular militias.

About the recuperation of Delbatsevo by the popular militias, it is most important to note that the battalions of regular Ukrainian regular army sent by Kiev have no desire to fight. In the words that Lenin used in 1917 when the Russian soldiers refused to continue the war, they “voted with their feet”. For HQ in Kiev, already mistrustful of its soldiers beforehand, the answer was to place them under the close watch of the ‘national guard’. The latter was set up by the governments that emanated from the Maidan coup. It is, for a great part, composed of ancient fascist militias – police and army mainly. And when Obama and the US military speak about the need to supply Kiev with heavier weapons, they do not have the Kiev’s regular army in mind, but this fascist and outrageous anti-Russian national guard.

It is by the thousands that the Popular Republic of Donbass counts its dead and its ruined habitations. It makes a just comparison between its present struggle and its resistance to the Nazis – and their Ukrainian allies – in the 1940-45 war. Through their reported ‘nostalgia for the Soviet epoch’, those who live in that region express a sharp awareness that the Ukrainian ‘oligarchs’ are not seeking any kind of democracy; along with the EU and the US capitalists, they care nothing for the demands of the Ukrainian population, in the North or the South. They have acted, and continue to act, purely in the economic and political interests of a small clique of fat cats.

Testimony of Victoria Shilova, Deputy to the Regional Council of Dniepropetrovsk** (extracted from the “ReseauVoltaire Video, 11.2.2105”)

“My name is Victoria Shilova. I am a leader of the ‘anti-war’ movement and deputy to the Dniepropetrovsk Regional Council. I want everyone to know that I am accused of sabotaging the conscription call up. To those who have started legal procedures against me, I reply: Me, Victoria Shilova, and our anti-war movement, are OPPOSED to conscription. We reject having to massacre civilian populations, and we do not want Ukrainian soldiers to continue to die. We oppose all this chaos, and the endless bloodletting that has been raging for months already on the territory of my cherished fatherland.

“Let me ask you: if you consider that this call up is legit, why has no state of war – or state of emergency been declared by the Constitution and the Ukrainian law makers? [..] Why is it that, to this day, is there no declaration of war? I’ll tell you why. It is because the warmongers are about to lose all credibility; it is because those who are in power now will one day be declared war criminals. It has been a long time now that our movement and sympathisers have denounced the fact that power [in Ukraine] is in the hands of war criminals. I have no doubt that those people will wound up on bench of the accused.

“After the war they unleashed between brothers and their bloody war against Donbas, they can rely on them finding their place there. This is where their political careers will end. This present call up is illegal. And not just illegal. It is anti-constitutional and criminal. [..]

“The law of the jungle reigns in Ukraine today. A new power carve-up had drowned Ukraine in blood. Those in power know very well that if they stop fighting, they will disappear in less than two weeks. The soldiers that Kiev is conscripting want no more war. It is not at all that they are morally smashed, they just do not want to fight their own people [..]

“Power is in the hands of what is called in today’s Ukraine: “the oligarcats”. Murderous oligarcats have grabbed the power in Ukraine. I said it before, and I say it again: I oppose the call up. It is life that I defend, for Ukraine, for the Ukrainian people, and regardless of where it lives. Those in power will be indicted for war crime. They will find themselves on the bench of the accused at the International Penal Court of The Haye. And we will be the witnesses.”

** Dniepropetrovsk is the 3rd town of Ukraine, towards the centre of the country.