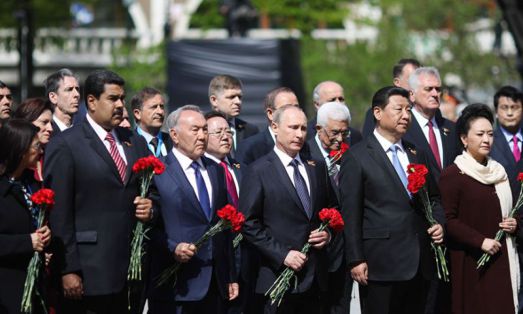 RUSSIA AND CHINA PUT A STOP TO TRUMP’S MILITARY OPTION IN VENEZUELA. The strategic collaboration of Russia with Brazil, in the Brics’ framework in particular, as well as the cooperation with Argentina, Venezuela, Cuba, Nicaragua and other States in Latin America and the Caribbean’s, looks for responses to the new challenges and threats. The incorporation of Russian enterprises in the dynamic sectors of industry, energy, communications and transport in the countries of the zone, has been accompanied by the consolidation of links through the Community of Latin American States and Caribbean’s (Celac).

Some of the links above and below open in English, and some open in Spanish or French, with an English translation option at the top.

Posadiststoday.com publish these documents from Venezuela Infos and Mision Verdad, in a tribute to their worth  and the confidence in humanity which they display. 3.12.2017

An investigation by Mision Verdad

Herebelow, the posadiststoday reproduce extracts of  Venezuela Info and Mision Verdad’s entire documents, to give a preview to the reader.  3.12.2017

Extract: Russia’s relationship with Latin American partners (in particular Argentina, Brazil, Chile, Uruguay and Ecuador) has taken another step after the escalation of the 2014 sanctions, which limited import of food products from the EU, USA, Canada, Australia and Norway. Russia has replaced them with deliveries from Latin America and has started the mission to make their economy more competitive and diversified by giving more support to the development of their agricultural economy.

Russia’s estimated trade with Latin America and the Caribbean amounted to $ 24000 million in 2013 while China continues to dethrone other foreign competitors, through mergers and acquisitions that reached $ 102200 million dollars invested by the China Development Bank (CDB) and the Chinese Export-Import Bank (Chexim) between 2005 and 2013.

It must be emphasized that none of the countries of the so-called Pacific Alliance, a Latin American trade bloc that currently includes Chile, Colombia, Mexico and Peru, made the decision, in its time, to sever relations with China, even though this bloc appeared as a close partner of the United States and Canada. Its members (minus Colombia) were among the countries wishing to establish the Trans-Pacific Partnership (TPP) canceled by Trump last January.

Because it has few positions in the Pacific because of the geographic containment barrier of Japan, Taiwan, Indonesia, and other US controlled places, the Chinese expansion logic is oriented towards the South Pacific.

Venezuela is the first Latin American destination for Chinese investment. Since 2001, some 800 cooperation projects have developed which have allowed the development of strategic sectors such as energy, oil, education, health, technology, trade, agribusiness, agriculture , infrastructure, industry, culture and sport. In 2013, bilateral trade had increased 13714 times from $ 1.4 million in 1974 to $ 19,200 million.

Russia has significant investments in the Orinoco Oil Belt through Rosneft, which have been consolidated and will be increased after the meeting in Moscow of Presidents Putin and Maduro in early October. Agricultural cooperation is also expected to increase through the establishment of high-tech food processing plants.

China and Russia thwart the interest of the United States to intervene more decisively in Venezuelan politics because the alliances made by the Caribbean country are vital for their geostrategic objectives. Statements from Moscow and Beijing to every aggression carried out by the United States in recent years have been clear. Both governments called for sovereign resolution of conflicts and non-interference, as the sanctions imposed by the Trump Administration represent a direct attack on past alliances with the South American country. Hence their support for a resolution of conflicts in Venezuela through elections, under the authority of the Venezuelan State and its electoral institution, object of attacks, the CNE (National Electoral Council).

Part of the global conflict takes place on a local territory, which allows Venezuela, in the reconfigurations of geopolitical dynamics, to play a decisive role in favor of multipolar as a search for a global political balance that allows it to exercise its right to exist in a sovereign way.