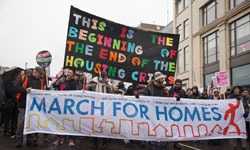 The Tory Party with David Cameron at the head, won the elections with a small parliamentary majority. But only 24% of the population entitled to vote actually voted Tory. The whole bourgeois class went to vote without abstentions. The 34% abstentions are mainly Labour therefore, and the millions of under-employed. The working class knows that it has no social voice in bourgeois elections; its abstention indicates its readiness to intervene directly on its own behalf.

The Cameron leadership lost its LibDem partner led by Nick Clegg who himself loses his seat. The decimation of the LibDem Party, a relatively recent creation, shows the feverishness and instability of political life in Britain; it was destroyed by its association with the hated Tories, and by the growing impossibility to manoeuvre effectively between the social classes.

Labour lost 26 seats overall, and practically all its seats in Scotland. In spite of this however, it is important to note that the vote for Labour still rose from last elections, passing from 29% in 2010 to 30.7% today. And this, in spite of the Miliband leadership which campaigned on the basis of continuing austerity, cuts and anti-immigrant postures. Miliband resigned from the Labour leadership because he felt repudiated – and was repudiated by the Labour masses.

THE CRISIS OF CAPITALISM WEAKENS THE TORY PARTY

As the Cameron leadership rushes to Brussels to obtain the concessions that might keep Britain in the EU, the panic of the European and British bourgeoisies becomes apparent. The separatism that divides Britain from the rest of Europe is now being complicated by a strong Scottish nationalism in Britain. The upper layers of capitalism and high finance know that these divisions flow from imperialist failure and the absence of capitalist perspectives. Obama calls on “Europe to stay together” because these divisions strike directly at the world-war strategy of capitalism against the Workers States and masses. The Cameron government’s response of: ‘English MPs for English votes’ plumbs the depths of the social, political and cultural incapacity of the capitalist regime – to say nothing of its financial crash still to come.

The growth of the petty-chauvinist group UKIP (from within the Tory Party) shows the fragmentation of the capitalist class and its unsuitability to lead a world economy. UKIP’s anti-immigrant stance helps tear the Labour leadership away from its working class base, as proven by the inane ‘Labour Mug’*, but this strikes at British capitalism too. The latter is seen as needing the skills of immigrant workers – many recently financed by East European Workers States – to save on the costs of training the British working class.  Such is the hypocrisy, short-termism, fierce inter-competition and weakness of the capitalist regime today. This does not bode well for an unaided Tory government intent on taming the British masses for another 5 year round of cuts. The Labour and trade union left must meet, discuss and base its confidence on such analyses.

To speculate freely, finance capital needs some political stability in Britain. Its world deployment and operations are decisive in the war of capitalism, now started, against Russia and China. The Scottish National Party (SNP) – which was electing Scottish MPs to the Westminster Parliament – appeared suddenly as an anti-nuclear weapon force. Its programme for land reform in Scotland[1] and the end of the Thatcher anti-trade union laws was hailed in Britain; but its call to have the British nuclear submarine Trident removed from Scotland received massive support. The silence of the Labour Party on this matter was deafening, and the fear of Ed Miliband to be associated with it was completely repellent.

It is clear that capital in general, and British finance capital in particular, fears the climate of political/constitutional uncertainty posed by the SNP’s separatism. But what it fears most of all, and by a long way, is the social and anti-war appeal of the SNP throughout the British Isles. Here is the new cement that is going to re-unite the British Isles on a new and anti-imperialist basis. The Labour left must hold meetings and reassure itself that the British Isles are going to re-unite as part of the struggle against finance capital and its atomic war.

The limitations of the SNP as a bourgeois Party are not in discussion here. The important aspect is that it proposed the programme that Labour should have had. By rejecting any association with it, Labour shamed itself and demonstrated its imperialist structure. Now, this contributes enormously to the pressure that forces the Labour and trade union base to link housing with landownership, get organised against the anti-Union laws, and take inspiration in the anti-coup, anti-Nato and anti-fascist struggle in Venezuela and the Donbass in Ukraine.

The advent of such an SNP programme is not separate from the mobilisations, strikes, demonstrations and mushrooming anti-capitalist organisations throughout Britain and Europe. Movements like Podemos in Spain, Syriza in Greece, Front de Gauche in France – and the huge anti-TTIP citizens’  mobilisations – are breaking the monopoly of bourgeois party power in Europe.

By its actions, the SNP proved to Sinn Fein in N. Ireland that it could, and should play a role in the political situation in Britain, bourgeois elections included.

LABOUR IS SOLE RESPONSIBLE FOR ITS LOSSES

Although it received 4 million votes, UKIP finally obtained only one seat – whilst the SNP got 56 seats with 1.4 million votes! The Tories win government whilst 75% of the population entitled to vote did not vote for them! People laugh at the electoral system and see it clearly as part of the ruling class ‘stitch ups’.

Labour got 2 million votes less than the Tories because the whole capitalist class voted. This shows that those who abstained were mostly from the labour base, but that base is very active politically in the country. It is organizing nationally against the cuts, against austerity, against unemployment sanctions (leading to thousands of suicides and deaths), against evictions, the privatisations (National Gallery), the cuts in wages and the gradual elimination of the pension rights. This labour and trade union base does not abstain from struggling! It does not wait for elections, and it does not depend on the Miliband leadership. It relies upon itself by forming all sorts of citizens associations (similar to the PAH in Spain), Peoples Assemblies, Defend Council Housing Organisations, Unemployed groups and anti-poverty organisations.

As soon as the election was over, the masses (youth and students particularly) went to denounce the Tory government in the streets. This shows that they, and their families, are organised and live politically. The PCS (Civil Service) and the RMT (Railway) Unions are forcing the employers to negotiate. It is even in the interests of the capitalist class, just now, to increase wages and consumption. The Tories won votes from UKIPs and LibDems, but they (Tories) still won less votes than John Major. The bourgeoisie is weak, and the masses feel strong.

The Labour machinery is wedded to capitalism. Its political impotence is that of impotent imperialism. The decision of Jeremy Corbyn (Left MP) to stand as candidate to replace Miliband makes a dent in the monopoly of the imperialist Blairite Labour structure. Even if J Corbyn does not obtain the support of 35 MPs, the Labour and trade union left can still gather around him and J McDonnell, at least until better representatives are found in the trade unions.

Whatever its failings, the SNP is not to be blamed for the lost Labour votes, as in Scotland. There was nothing to stop Labour taking a few leaves from the SNP programme, proposing agrarian reform in Britain as a whole and the repeal the Thatcher anti-Union laws! Since following the capitalist class did not bring votes to Labour, why not try following the working class and its trade unions struggles instead?

The various Labour currents need to unite against the suspension of Christine Shawcroft and lend support to the local councils that resist the onslaught of finance capital and land ‘developers’. The need is for mass meetings, debates and publications in the Labour Party and the trade unions. The Labour leaders must be sought in the working class, particularly where the working class struggles, as in Ineos in Scotland for instance. Up to now, most Labour leaders have been sought amongst those who oppose the working class, as in Falkirk.

There is no reason to accept that trade union leaders vote and represent millions of workers without ever being mandated by those workers. The means of mass communication and consultation now exist to achieve this.

The Labour-Trade Union link will continue to exist only if it grows in the working class because the capitalist class and its Blairite allies in the Labour Party want it entirely eliminated.

* Labour produced a drinking cup bearing an anti-immigration slogan. This ‘mug’ did not lead to complimentary puns.