Despite the exponential expansion of the Covid-19 pandemic, the Operation DEFENDER 20 organised by NATO continues. 20,000 US soldiers have landed in European ports since the beginning of February, 20,000 other soldiers from different European countries are crossing, building and repairing ports, docks, roads, bridges, weapons depots, barracks. They do this from France to the borders of Poland, there to settle against Russia. This Operation Defender 2020-Europe is said to be “an exercise targeting no one” but Russia is clearly the target.

The operation has barely been scaled down following the defection of Finland and Norway. As part of the “training”, exercises are also planned with the use of actual nuclear weapons. On the eve of the launch of the Operation, the Saceur (Commander-in-Chief of SHAPE) coolly declared that he was “favourable to the idea of using nuclear weapons first”.

At the end of World War II, the United States dropped the first atomic bombs on Japan. It was not a necessity to end the war. It was an “experiment” and a war crime, to see the effects on civilian populations, to intimidate the Soviet Union and stop its progression. It was the first act of the so-called cold war.

The virus, a mighty good cover for the Nato’s war preparations.

While, today, the pandemic of the Corona virus is nailing the populations of the world in front of television screens feeding us with catastrophic news, there is total silence on this operation Defender 2020. Wherever the virus comes from, the paralysis that the pandemic is supposed to be causing offers a mighty good cover to the Nato’s war preparations. Operation Defender 2020 is referred to as a “simple exercise” but it is preparing the conditions for a surprise nuclear attack on Russia. If this were not so, why should the European states – already equipped with the B-61 nuclear bombs and the F-16 nuclear bombers – be forced to buy the new and more sophisticated nuclear bombs B61-12, and the F-35 bombers?

Anti-war movements, workers’ parties, trade unions and all the anti-capitalists must break the silence! In this period of confinement, reflection and electronic communication, the conditions exist for the organisation of united national and international anti-imperialist fronts against the atomic war clearly in preparation.

In each of the countries where our leaders are participating in Defender 2020, we must call for the closure of the NATO bases, and for the soldiers to refuse to participate in the new war crimes coming up. The Defender 2020 operation must be cancelled and not just scaled down or postponed.

Our complicit governments must withdraw from their military budgets the funds that are needed to provide people with the dignified health and care services that put human life above everything. The hatred of world capitalism for Russia, China and Cuba has not changed since 1945 when Churchill proposed to the “allies” to pursue the Second World War until the USSR was crushed. Defender 2020 is treacherously presented as “an exercise” but the hope of world imperialism – led by the USA and NATO – is to prolong the monstrous life of the capitalist system by crushing once and for all (if they can) Russia, China and the peoples that support these countries.

Our political landscape is changing irrevocably, but it is not due to the virus. It is due to the social, economic, political, cultural and systemic crisis of the capitalist system. When they deliberately decided not to take preventive measures against the virus, the Trump, Bolsonaro, Johnson, and other governments lifted the veil on the deadly indifference, if not hatred, of capitalism for human life. 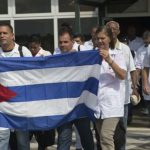 In the face of this calculated complacency and incompetence, Cuba sends its brigades and medical missions to multiple countries on all continents (*). The arrival in Lombardy of experienced and equipped Cuban and Chinese doctors showed to the world that so-called “developed” countries like Italy need the solidarity, knowledge and proletarian internationalism of the former colonies that they despise. It is important to highlight that Russia, the target of this Operation Defender in which Italy plays a deadly role, has just sent 9 planes to Italy filled with medical supplies, equipment and specialists.

In all the so-called “advanced” capitalist countries, the yawning gaps in the so-called Social State, Social Security, and Public Health have kept widening. Pharmaceutical companies – all in the hands of big capital at the forefront of technological innovation – have shown their incapacity to come up with the most elementary protections. In the European Union, budget cuts and privatisations destroyed the public health systems won by the great struggles of the workers and masses after WW2 when they said: “War never again!” And today, if the Covid 19 pandemic can be stopped, it will be thanks to the solidarity of the workers and their dedication to the good of all.

Various levels of containments and curfews (said to serve the fight against the virus) have temporarily paralysed populations, but there, the social weight and authority of Cuba, China and Russia have increased enormously. Defender 2020 has mobilised nearly 40,000 American and European soldiers to defame Russia and its allies like China and Cuba, but it is those countries that gain and regain social authority in the world. Conditions are favourable for the effective start of an international anti-imperialist and anti-war front.

The internationalist behaviour of China, Russia and Cuba shows, beyond their many bureaucratic limitations, that the revolutionary structures of the Workers State are not dead. Ultimately, the conduct of these countries stems from the inescapable and indestructible need for proletarian internationalism, the only antidote to the capitalist mentality of “every man for himself” and “me against everyone”.

The working class, the trade unions, the social movements, the anti-war and climate defence organisations must unite internationally around the idea that Operation Defender 2020 must be cancelled, and not just postponed. In every country, the F-35 purchase contracts must be denounced and revoked. The US nuclear bombs stored in the European countries must be ejected. The military bases in all the European countries must be closed. The armaments budgets must be drastically pared down and all the companies working in the arms industry must be converted. All the pharmaceutical companies and the health services must come under public ownership.

(*) On October 17, 1962, during the inauguration of the Victoria de Girón Institute of Basic and Preclinical Sciences in the Cuban capital, Fidel Castro announced the government’s decision to provide aid in the health field, and stated that 50 doctors would be sent to Algeria.

“Today we can send only 50, but in eight or 10 years, who knows how many, and we will be helping our brothers,” the Cuban leader said then.

Almost six decades later, more than 400 thousand health collaborators from the Greater Antilles have carried out missions in some 164 countries, while with the same disinterest 35 thousand 613 professionals in that field have been trained for free on the island.

Unsurprisingly, Fidel’s comments reaped anger from the most extreme sector of Cuban-Americans in South Florida who oppose any rapprochement with the Caribbean island.

In 2016, Sanders defended diplomatic relations with Cuba, which in his opinion “will result in significant improvements in the lives of Cubans and will help the United States.”.

[..] Sanders has reiterated his position regarding the elimination of the blockade that both Republican and Democratic administrations have maintained for nearly six decades.