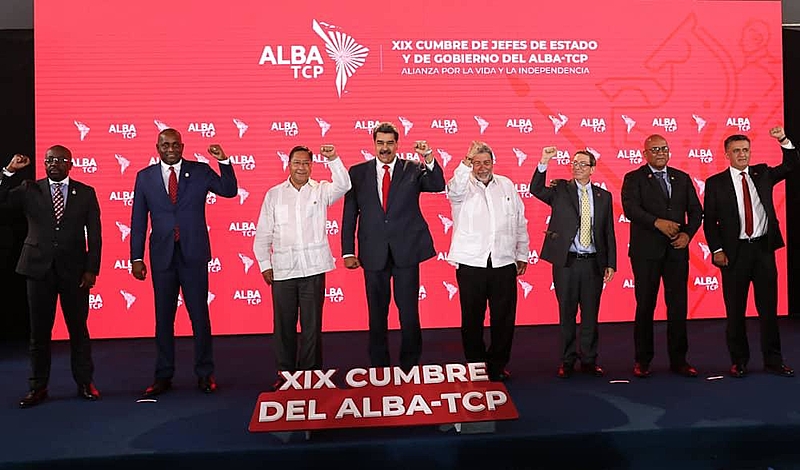 Integration and cooperation to overcome the pandemic, strengthening economies are among the conclusions of the 19th summit of the Bolivarian Alliance for the Peoples of Our America (Alba-TCP). The meeting brought together representatives of the nine alliance member countries in Caracas on June 24. The summit also celebrated the 200th anniversary of the Battle of Carabobo – a decisive battle that allowed the armies of Simon Bolivar to deal a fatal blow to Spanish colonialism and seal the independence of Venezuela, Ecuador, Colombia, from Bolivia and Peru. As Venezuelan political scientist William Serafino explains: “What lessons should we learn from Carabobo today? First, that political / programmatic unity is the key to victory and that the ethical / ideological battlefield is as essential as the military battlefield. On that day, on the battlefield, the ideas of the old European imperial order and the premises of a new geopolitics of sovereign nations clashed“.

“Despite all those who conspire to prevent us from forming a multinational unit that has found its roots, we are here, present. We are very moved that, despite the entire demoralization campaign against Venezuela, you are here to accompany the Venezuelan people. I asked our people the other day: Why did the victorious Bolivar not stop after liberating Venezuela and settling in Caracas or Bogota? Because for him, and the Libertadores, ideas and vision exceeded the measure of a lifetime, the Fatherland was the Great Fatherland as for us today: the Fatherland is America. Either we all free ourselves or no one is free” said President Nicolás Maduro in welcoming the leaders of the ALBA member countries.

The Alliance’s immunization bank will use the Cuban vaccine:

With the confirmation of the 92% effectiveness of Cuban Abdala vaccine – a formula that will be used for the Alliance’s immunization bank – one of the central issues of the debate was the start of a mass vaccination campaign. Bolivian President Luis Arce has proposed forming an international brigade of Latin American School of Medicine (ELAM) graduates to begin vaccination in the countries of the bloc, starting with the most vulnerable. “They must reach every street corner, every community and every working-class neighborhood, so that no one is left behind, that everyone’s rights are guaranteed” said Luis Arce.

In addition to the global health crisis, the presidents present also celebrated Cuba’s victory at the United Nations. For the 29th time, the United Nations General Assembly – the true international community – approved a resolution demanding the immediate lifting of the economic blockade imposed almost 60 years ago by the United States and maintained by the Biden government. 184 out of 189 countries voted against the blockade. Among the few to vote for the blockade: the USA and Israel.

According to the Cuban government, the embargo has caused losses of 147.8 billion US dollars since 1962.  Despite the blockade, the Caribbean island is the first country in the region to create its own vaccine against the Sars-Cov2 virus; it has also sent medical missions to 39 countries during the pandemic. “We thank all member states of Alba-TCP for their unconditional support and support for the resolution against the blockade“, Cuban Foreign Minister Bruno Rodríguez said.

During the summit, the presidents agreed to create new funding programs through the ALBA-TCP / ALBA-TCP bank.

The Alliance also celebrated the latest elections in Chile, Peru and Mexico, which signal a further rise in progressivism in Latin America.

Alba-TCP Executive Secretary Sacha Llorenti also said “We condemn the attacks and attempts to destabilize the legitimate government of Nicaragua by the United States. We ratify our unconditional support for the Sandinista government of President Daniel Ortega”.

From Managua, the President Ortega recalled that contrary to what the international media is saying, twenty people in Nicaragua have not been arrested for being “opponents” but for knowingly violating Nicaraguan laws on NGO foreign funding.  This question is about the disarticulating of USAID’s media-political network, itself a tool of destabilization used by the United States against progressive governments and denounced by countries like Bolivia, Cuba, Venezuela – and more

Recently Bukele of El Salvador and Lopez Obrador of Mexico. “As the United States put pressure on us about these twenty people, I tell them: ‘Release immediately the four hundred who you arrested and keep in jail for storming the Capitol’, the President of Nicaragua quipped.

Oppose the actions of the regional right:

The Prime Minister of Saint Vincent and the Grenadines, Ralph Goncalves, meanwhile reaffirmed the importance of the ALBA to oppose the actions of the regional right which has taken control of international bodies such as Organization of American States (OAS). “They managed to invent a coup d’Etat through electoral missions. Alba-TCP is a whole, it is more than the sum of its parts. We must stand up for each other so that they do not divert us from our path“, said Prime Minister Ralph Goncalves.

For his part Dominica’s Prime Minister Roosevelt Skerrit explained how the United States and the OAS tried to interfere in the elections that took place in his country but were put in check, as in Bolivia. “We will always be part of this institution of ALBA, we will continue to work tirelessly because we are not afraid to raise our voices. Solidarity with Venezuela must be unconditional” he said.

Bolivian President Luis Arce took the opportunity to apologize to the diplomatic missions of Venezuela and Cuba that were harassed and persecuted in Bolivia following the coup d’état by the far-right government of Jeanine Áñez. “We are leading the legal battle, we are fighting for memory, truth and justice, so that this type of 21st century coup d’etat does not repeat itself“, he insisted.

Rafael Correa, Evo Morales and Piedad Córdoba, former Colombian senator and human rights defender, were the special guests of the ALBA-TCP / ALBA-TCP summit, as well as the delegates of the Bicentennial Congress of the Peoples that took place in Caracas from June 21 to 24. Córdoba denounced the daily massacre, torture and disappearances of citizens and in particular young people at the hand of the Colombian government and its paramilitary networks. “And the world is silent” denounced the Venezuelan president.

Adriana Salvatierra, former president of the Senate of Bolivia, read the conclusions of the Bicentennial Congress of the Peoples in defense of the processes of self-determination of peoples, not only in Latin America but also in Palestine and the Saharawi Republic. This autonomous Congress brought together more than a hundred activists from social movements, parties and leaders who have developed strategies for a world free from capitalism. Meetings on indigenous movements, the rights of women, Afro-descendants, sexual diversity, the rights of workers, the elderly, ecology, social communication, the multipolar world, etc. The final declaration – like that of ALBA – was voted by a show of hands by the heads of States, as a roadmap arisen from the social movements

The reactivation of UNASUR and CELAC:

Keen to intensify regional integration, the presidents, foreign ministers and prime ministers also declared that one of their objectives is to reactivate the Union of Southern Nations (UNASUR) and the Community of the States of Latin America and Caribbeans (CELAC). Let us recall that the Alba-TCP was founded in 2004 on the initiative of Presidents Hugo Chávez (Venezuela) and Fidel Castro (Cuba), shortly after the defeat of the FTAA – Free Trade Area of the Americas – defended at the time by the United States and its ultra-liberal satellites. Today, the anti-imperialist platform brings together Venezuela, Cuba, Bolivia, Grenada, Dominica, Saint Vincent and the Grenadines, Antigua and Barbuda, Nicaragua and Saint Kitts-and-Nevis.

In addition, in an unprecedented initiative, the Puebla Group[1] is reacting to threats of destabilization from the extreme right united around Keiko Fujimori. It will meet the elected president of Peru, Pedro Castillo, within the framework of a forthcoming conference  “Defending democracy, popular sovereignty in Peru and the electoral triumph of master Pedro Castillo” which will be moderated by Marco Enríquez-Ominami, ex-candidate for the presidency of Chile and co-founder of the Puebla Group with Lula da Silva, Dilma Rousseff or Evo Morales . This conference will count on the exceptional participation of the former Spanish Prime Minister, José Luis Rodríguez Zapatero; Jairo Carrillo, from the Conference of Political Parties of Latin America (COPPPAL); Maite Mola, from the Party of the European Left; Manu Pineda, MEP from the left parliamentary group; and Monica Valente, from the Sao Paulo Forum; amongst others personalities of global progressivism.

The event, will be broadcast through Facebook Live of the Puebla Group, the Sao Paulo Forum and the Youtube channel of the Brazilian Workers’ Party, among others. It will also see the participation of the former foreign minister of Ecuador, Guillaume Long, the Senator of Mexico Beatriz Paredes, the former Minister of Brazil and founder of the Group Aloizio Mercadante, the Argentine Senator Jorge Taiana and representatives of the Progressive International[2], of the Brotherhood Group and the Latin American Socialist Coordination, among others.

[1] The Puebla group, formed in July 2019 in Mexico, is supported by political and academic leaders from 32 countries in Latin America and others.