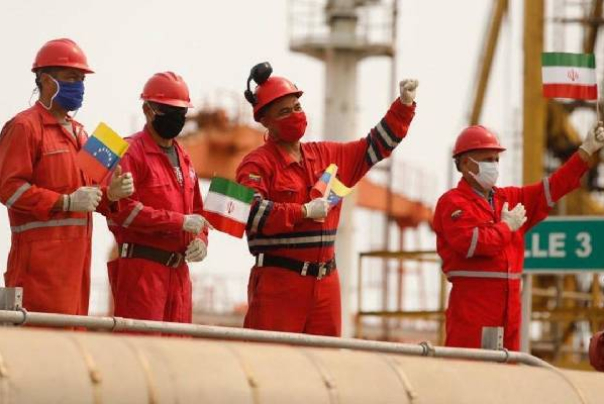 THREATENED BY THE UNITED STATES, FIVE IRANIAN TANKERS ENTER THE VENEZUELAN TERRITORIAL WATERS UNDER THE PROTECTION OF THE BOLIVARIAN ARMED FORCES OF VENEZUELA.

The Posadists Today reproduce the document from “Venezuela Info” below, to salute this day (24.5.20) when two Revolutionary States (Venezuela and Iran) won a key battle against world counter-revolution and war. This victory rests on a favourable world balance of forces determined by Russia and China; for the latter stood ready to assist as they watched the first two Iranian tankers entering victoriously the port of El Palito. As for world imperialism, with all its devastating weapons and its most deadly sanctions, it did not intervene because there is nowhere – least of all in the United States – where it wins its battle against the mobilised populations fighting for human justice and the right to development.

“LET’S UNDERSTAND THE GAS WAR IN VENEZUELA WITHOUT WAITING TO BE ‘INFORMED’ BY THE MAINSTREAM MEDIA” – Venezuela Infos says: (25.5.20):

Gradually, the cooperation of “the two-thirds of the world” that had been the dream of Simon Bolivar is taking shape. What deprived Venezuela of gasoline was the U.S. blockade aimed against  Venezuela’s refineries and to stop that country importing additives with which to produce gasoline locally.

Threatened by the Trump administration but escorted by the Bolivarian army as soon as they reached the Venezuelan waters, these ships bring gasoline for two weeks and additives to continue production there. This victory in the face of the long economic war – launched in 2013 and strengthened during the pandemic – is a hope for so many nations suffering from the “sanctions” – unilateral coercive measures – of the West.

The Venezuelan government’s plan is to reactivate its refineries to meet domestic demand. The US bets on this never happening, and on its ability to continue to work until the whole Venezuelan economy collapses. It counts on a social rupture that will finally allow “regime change” via a coup d’Etat or a military invasion.

What are the key elements to this war?

Under the pressure of a media world that has become homogeneous, most Western journalists or political scientists invert causes and effects. They make President Maduro responsible for the ongoing “crisis”. Or, more from ideology than observation, they posit equivalence between economic war on a one hand, and the internal problems of mismanagement or lack of investments on the part of the Bolivarian government.

As journalist Erika Ortega Sanoja explains, Venezuela imports gasoline from Iran for a variety of reasons:

Journalist and sociologist Marco Teruggi lives in Venezuela. We translate here his analysis for the light it casts on these facts in the context of the Bolivarian revolution:

“The gas station in front of my house closed a few days after the generalised [coronavirus] containment began (3 April). Everyone had gone and a rope across the way had said: ‘closed’. Believing this situation momentary, people had wondered where else to get gas and where stations still open could be. But then, and as in all penuries, reselling started and prices increased as the situation worsened: $1 dollar per litre, $1.5, then $2 and up to $3.  In a country where filling a tank has been virtually free for consumers since time. Refilling queues lengthened, sometimes for more than a day, sometimes two, and the lack of fuel was ‘normalised’.

Queues to refill was a new thing for Caracas – although it happened between 2002 and 2003 when PDVSA’s senior executives organised an oil lockout to bring down Hugo Chavez. Such queues are not a new thing in many parts of the country either, those with a border with Colombia particularly. In Apure, Chira, Merida or Zulia, fuel queues have been going for almost three years now due to mass smuggling to Colombia where the gas is resold at market price. In 2006 for example, President Alvaro Uribe legalised the smuggling of Venezuelan gasoline. Itself alone, the “Cooperativa Multiactiva del Norte” – authorised by him – can store up to 3 million litres.

In recent months, the lack of fuel has spread to towns near Caracas. We started talking about the gas crisis as early as March this year, when there was a shortage in the capital. In Venezuela as in many Latin American countries, the capital plays an oversized role in political dynamics. What happens in Caracas takes on a ‘national character’ which can impact the central political power.

To better understand the causes of this situation, here is a time-line showing the various actors involved in political situations of sieges, trenches, negations in the most complex moments of recent years.

In August 2017, the White House issued the first of a long list of sanctions against Venezuela’s oil industry, PDVSA, through Executive Order 13808. That month coincided with an electoral defeat of the right in Venezuela, concretised then by the election of the National Constituent Assembly which meant a victory for Chavism.

The first decree began to shape the technical blockade of PDVSA. Its central objective was to break the backbone of the Venezuelan economy. It meant to shut off the sources of the foreign capital necessary to the functioning of the industry. In 2018, three more U.S. decrees were issued against Venezuela affecting different sectors of the economy. On 28 January 2019 – five days after Juan Guaidó’s self-proclamation and his immediate recognition by Donald Trump – the White House issued Executive Order 13850. It focused on PDVSA and the Central Bank of Venezuela. The U.S. declared that: “As a result of today’s action, all assets and interests held by PDVSA under U.S. jurisdiction are blocked, and U.S. persons are prohibited from engaging with them”. This included the blocking of $7 billion of PDVSA’s assets in the United States, and the appropriation by the ‘Guaido Clan’ of CITGO; this PDVSA-affiliated refinery on U.S. soil had just been declared ‘for sale’ by a judge – a measure that the Venezuelan government has denounced as illegal. Blocking PDVSA on the U.S. energy market cuts it off from international buyers. 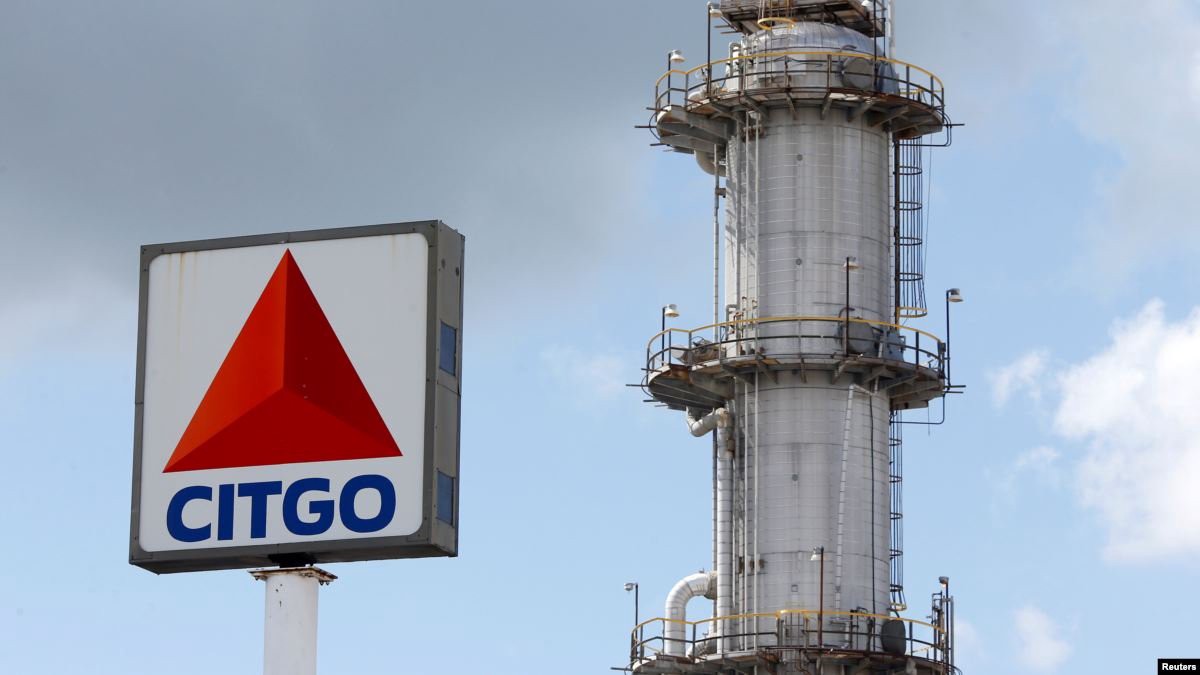 Sanctions continued to multiply: more than 30 PDVSA ships and tankers were blacklisted by the Treasury Department. On 5 August 2019, the White House issued Executive Order 13884 that seized all Venezuelan assets in the United States, including CITGO. The arsenal of measures aimed at destroying the economic domain of PDVSA then fell on foreign oil companies, as in the case of the Russian companies Rosneft Trading and  TNK Trading International in early 2020. The Western media were already jubilant at the thought of Russia dropping Venezuela to save Rosneft, when Moscow curbed Trump’s plans by deciding to bring the company’s activities under the direct control of the Kremlin.

This way, the U.S. was going for asphyxia on two sides. It blocked PDVSA as the main source of revenue for Venezuela, and it blocked the whole economy with a general paralysis linked to the impossibility to find gasoline. Reuters reported: “Venezuela’s fuel shortages worsen after U.S. officials press foreign companies not to supply it with fuel.” This measure started in late 2019 was well in place by 2020.

The most recent measures were announced on Monday by Mauricio Claver-Carone, the White House Head of National Security for Latin America. He threatened the foreign companies that operate in Venezuela: “There are no exceptions for Chevron production, there are no exceptions for any company in the world; we spoke with Repsol, Reliance, Eni, and we showed them what happened with Rosneft Trading [1] (…); we told them that if they continue supplying, they will run the risk of sanctions that could be devastating for them.”

2017 was the year of the first U.S. decree against PDVSA. It coincided with President Maduro’s major decision, quite a political earthquake, to clean up the entire oil industry. The latter had fallen into decline under the management of Rafael Ramirez who had been appointed by Hugo Chavez. The two previous oil industry President and Oil Minister – Eulogio Del Pino and Nelson Martinez were arrested for the web of corruption they had woven inside CITGO from 2014 to 2017.

At the end of 2017, the public prosecutor’s office of Venezuela accused the PDVSA President and Oil Minister Rafael Ramirez of acts of embezzlement, accounting tricks, sabotage and overcharging for contracts. These acts had started in 2009 and continued until 2014 when Ramirez was replaced by Del Pino. Ramirez fled Venezuela’s justice and he is now negotiating his absolution with the U.S. justice system for other acts of corruption.

The investigation conducted by the public ministry since the nomination of its new Public Prosecutor uncovered a corruption network in the presidency of PDVSA. Dozens of managers were involved inside the Ministry of Petroleum between 2009 and 2017. Efficient arrangements guaranteed impunity in exchange for commissions paid, as in the case of Attorney General Luisa Ortega Diaz who then fled Venezuela and is now implicated too in corruption cases in the United States.

To what extent has this long history of corruption impacted the management of investments in wells, in refineries, in production and in the necessary decisions to be made in a complex company such as PDVSA!

2017 was a crucial year. It marked the start of the direct U.S. blockade on the oil industry as well as the change of presidency in that industry – after eight years of leaders deeply involved in corruption. And so, this matter is in two parts : Internal revision is needed, along with the rebuilding of structures to cope with the rain of sanctions. These affect more and more sectors and routes. For example, the blockade has impacted the importation of the chemicals needed to produce gasoline, and the theft of CITGO has led to essential assets being lost, along with spare parts and refining additives.

In the three years since the arrest of Del Pino and Martinez, oil production and gasoline refining have not stopped declining. Manuel Quevedo appointed to restructure PDVSA in 2017 was replaced in April 2020 by chemical engineer Asdrubal Chavez, respected for his long experience in petrol management and relations with OPEC.

The PDVSA company has a peculiarity. From the mid 70’s onwards, its structure was made to answer the needs of the transnational U.S. extraction companies, their machines, their accessories, their technologies and their managements. This prolonged state of dependency gave to the United States a lot of inside knowledge and powerful means to interfere with supplies and key machinery.

This is why beyond exporting crude and importing gasoline, the new PDVSA agreements with international allies include the purchase of parts to replace the U.S. ones, as well as the means to bring back into service refineries like El Palito [2] now receiving some from Iran.

The arrival in Venezuela of these five Iranian tankers (Carnation, Fortune, Forest, Petunia and Faxon) with a capacity of 1,487,500 barrels of oil, has caused the Trump administration to make threats. The latter told the world that it was sending four warships in the region “for an anti-drug operation” led by Southern Command, an operation announced last March. But the Iranian government sent a reminder to the world that an agreement between two sovereign States is at stake: “Iran will not stop at obstacles. The United States and the other countries know that we mean it. If obstacles continue or increase, Iran’s response will be crushing” [3].

[2]  On 23.5.20, the first of the five Iranian tankers bringing fuel to Venezuela moored at El Palito. This is a port where Venezuela owns a refinery. In the teeth of the US-EU military, Iran brings to Venezuela 1.53 million barrels of gasoline and refining components. Note that the British army was involved alongside the US, to try and stop these two sovereign states collaborating against dispossession and want. (Editorial note)

Note: the feature picture shows the Venezuelan port workers welcoming Fortune, the first Iranian tanker entering the port of El Palito, soon to be followed by the second tanker, Forest.