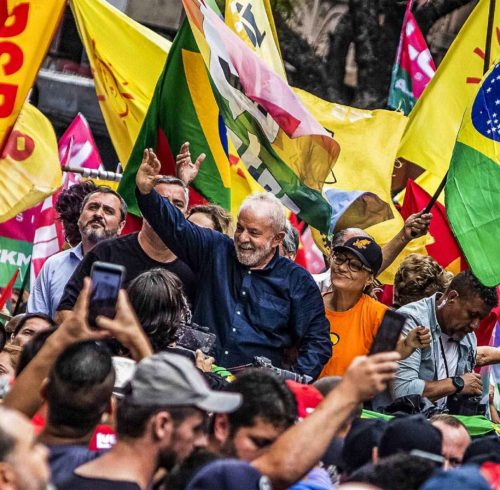 The first of those two forces are represented by the United States and NATO members’ States; they defend a unipolar world, backwardness and barbarism. Opposed to them are the forces represented by Russia and China, seeking to build a multipolar world, progress and civilisation.

Lula’s victory is a defeat for the forces of the fascist right-wing advancing in some countries, as in Europe. It adds to the electoral victories of progressive and leftist governments in Latin America, from Mexico to Chile, passing through the defeat of the coup d’Etat in Bolivia, whilst Colombia has voted out a bloodthirsty neoliberal bourgeoisie. With a broad victorious democratic and popular front, Peru and Argentina face up to the law of the oligarchs and financial corporations.

Lula has electorally defeated a right-wing government represented by Bolsonaro, which used all international and national arsenals against Lula, against the Workers’ Party (PT) and against the Broad Front (Enlarged Front). Bolsonaro spawned fake news on internet networks reaching 50 million people. He bought Congress politicians through some secret budget. He copied and created temporary social programs and co-opted votes. He had roads blocked so that people couldn’t vote. He facilitated the purchase of weapons by his followers and divided the country by spreading hatred through it.

The poor voted overwhelmingly for Lula, for what he represents as a human being, his class origins, the history of the struggle, his achievements during his 8 years as President of the Republic. They helped to build the Broad Front of parties to defeat Bolsonaro and the Third Way[1].

The right certainly ended up splitting when sectors of business, bankers, large farmers and traders started supporting Lula’s candidacy. Deprived of internal market, large layers of the national bourgeoisie (agricultural and industrial) find they cannot cope with the financial concentration and a weak State. The Globe TV network never ‘lost’ a presidential election and it did beat Lula several times. But this time, it supported him, seeing what barbarism and financial cuts the Bolsonaro government had brought to bear.  In the Supreme Court, most of the judges who had connived in the coup against Lula and Dilma decided to turn the page.  A telling expression of this power crisis and judiciary revision shows in the firmness of the president of the Superior Electoral Tribunal, Alexandre de Moraes who stood against the [attempted] coup by the Bolsonaro’s supporters[2].  All this allowed Lula’s victory, on top of the historic militantism to be found in the more developed urban centres, North-East of the country.

The transitional government[3] finds itself in the situation to be expected – a totally devastated government. The first days of Lula will face the priorities: the fight against hunger, the minimum wage upgrade, the emergency vaccination program against diseases eradicated long ago, stop to deforestation and illegal mining, public security, control the strategic companies now that they are back in the private sector.

The Lula government will have to defend food production on agro-ecological and organic bases and through family farming, to supply the schools and the assistance centres where people are in food insecurity. An effective and decisive national program will have to be put in place to combat the poisons (insecticides and pesticide fertilizers) that have destroyed important regions like the Cerrado[4] as well as the Atlantic Forest, Amazonia, the rivers and the underground waters. The government will have to implement a program that securely consolidate an agrarian reform in the unproductive zones, enabling thousands of families to work with appropriate technology, with a bank of credit to finance these projects. A program of decentralisation of the production of ethanol by small rural producers, supported by a State Bioenergy entity. In this [process of] full transition and in the different regions, the progressive forces of the Electoral Front in Congress – the ‘Expanded Electoral Front’ – must intensify the struggle for the re-nationalisation of the Petrobras Oil Company and the Eletrobrás Electricity Company.

Capitalism is in a state of profound economic and social crisis – this 2022 election being a result of it. In spite of this however, the interested forces that led to the coup against Dilma and the arrest of Lula continue to operate, in the country and in the world. They do not give up. The Republicans and the Democrats of the United States will never let go of their strategic interests focused on oil, minerals like lithium and gas. They press on for the privatisation of state enterprises, grain production and the public services. They press on with the preparation for war.

The Lula-President campaign in October 2022

Seeing the way the United States foment conflict in Ukraine, what won’t they do to keep the Latin American countries as suppliers of raw materials, de-industrialised and poor? This will be the posture of imperialism, no doubt about it.  The survival of the Lula government is therefore going to depend on the political capacity to build on an Enlarged Front, to defend national sovereignty, to forge a political consciousness, create an independent mobilising capacity. For the battle in Congress where this government enters in a minority, decisive debates are going to be needed, such as the one around citizenship (including for opposition voters), with the public communication of all the government’s plans and measures. The time has come to install participatory democracy. It is indispensable.

The crooks financed by businessmen and national and international NGOs are set to keep a coup situation going against President Lula. As the example of Argentina shows, the combined power of media and Judiciary remains intact; in full democratic and popular government, this power can trigger large-scale struggles – as it did against Cristina Kirchner – and new coups d’Etat.  Brazilian society is divided. The fascist forces that fermented during the Bolsonaro’s government come out of hibernation, emerge overnight. In this moment of transition, Lula must choose his government team in the best political and technical personnel. He must take the reins, control the transition team, take the diagnosis of the country. Any hesitation could be fatal, and those now betting against Brazil are watching. The future Lula government must support itself on the Enlarged Front. It must march with the fronts – popular, trade unionist, student and progressist –  that offer foundations for a new project of social transformations.

Only hard-hitting measures will be able to stop the illegal fascist right-wing blocking roads, blocking the national security zones, the front of the army’s buildings. These actions encourage the killing of people, and even of public figures linked to the PT (Workers Party). And they create retrograde and backward religious bases in the population. New forces of national defence [are needed], civil and military democratic forces with the popular support already expressed in the campaign for Lula-President.  In his capacity of commander of the armed forces, Lula will want to identify the progressive sectors inside the Armed Forces. These are the soldiers not linked to the Bolsonarist crooks – a complicated task seeing how these latter have been co-opted to hundreds of positions inside the government.

The harmful experiences of the right-wing coup against Evo Morales in Bolivia, like the tour of former general Villas Boas in Brazil[5], are very much alive. The Bolsonaro government has brought in the country the worst of what happens in the United States. Trump’s “golpism” with the occupation of the Capitol. The spread of weapons, something that even the American people repudiate, by all accounts. The speed corruptions that lead to the assassination of teachers and children in schools, as in Aracruz[6].

Although the coup strategies of Steve Bannon and of the right-wing forces around the world have been partially defeated, they won’t stop destabilising the governments opposed to the interests of the war industry, to the media and finance industry of the United States.

The Lula government can count on important factors: the financial support of the Chinese government to Cuba, and the inauguration by President Putin of a statue of Fidel Castro (in Moscow). This highlights the importance of the struggle of the Cuban people for national dignity and sovereignty.  And there are the BRICS themselves which the PT helped to build.

Haddad’s eventual appointment as finance or economy minister[7] has a national and regional significance. He has been active in the Progressive International and its defence of a single currency for the South American continent, the anti-dollar that UNASUR had envisaged in the Chavez’ period, none of this offering guarantees to the so-called “market”.

It seems that Lula, himself a prominent figure at COP27, will be with Lopez Obrador a centre for the resumption of Latin American integration, with the proposal to intensify economic relations, including the intensification of BRICS, and the creation of a new money for the South American continent. Brazil, once the world’s fifth-largest economy, has potential in all of these areas. But it is above all the support of a significant part of the poor and excluded that got Lula elected. It is that which represents the political and moral heritage widely welcomed by various leaders in the world.

[1] Politicians like Alessandro Vieira, connected with the Centrist Citizenship Party, tried to create a third way between Bolsonaro and Lula.

[2] On 1 November 2022, Moraes rejected the demand coming from Bolsonaro’s allies to challenge the result of the presidential election.

[3] Lula won on 27 October On 9 November 2022, the vice president Geraldo Ailckmin put in place a government of transition in preparation for Lula coming to government.

[4] The Cerrado is a large tropical region in the East of the country. It is composed of several States.

[5] Army General Villas Boas was head of the Brazilian army at the time of Dilma Rousseff. When asked what he thought of the Army participating in operations to ‘repossess’ favelas in Rio de Janeiro, he replied that the army must be ready to fulfil its mission which includes enforcement of Law and Order.

[6] On 25 Nov 2022, there were two mass shootings in two schools in Brazil, in the same street of Aracruz-Espirito Santo. Four were killed and 12 injured. The shooter, a former pupil, was 16 and wore a swastika.

[7] On 22 Dec 2022, Lula named Fernando Haddad Finance Minister. Lula’s financial team has declared its intention to give importance to social spending to improve the country’s economy and welfare.