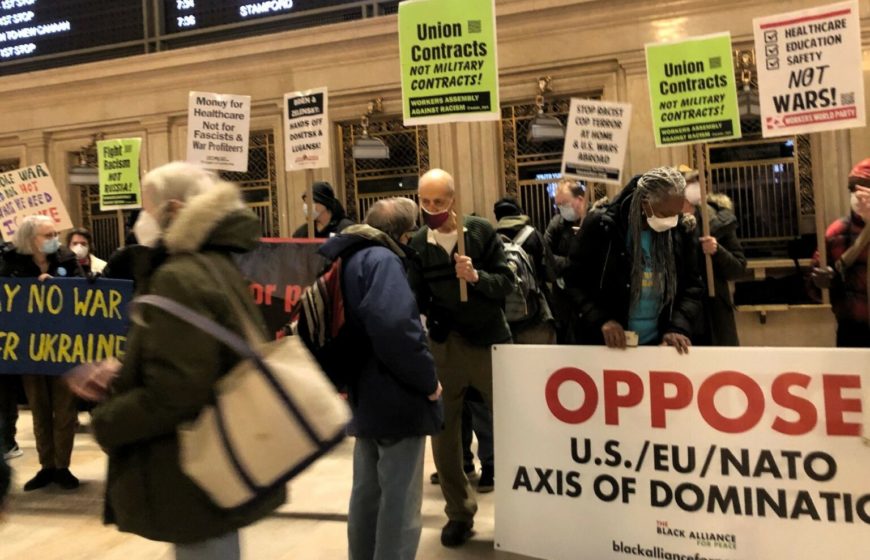 On Feb. 24, the anti-fascist Donetsk and Lugansk People’s Republics, together with the Russian Federation, launched a military action with the goal of “demilitarization and denazification” of the U.S.-NATO coup regime in Ukraine. It is in the interest of poor and working people, anti-war and anti-imperialist forces, especially in the U.S. and other NATO countries, to take a clear and unambiguous position in solidarity with the anti-fascist forces. The real war danger comes from U.S. and NATO forces surrounding Russia. The government in Kiev is a proxy of these forces of war, with no regard for the people of Ukraine.

In March 2014 British foreign secretary William Hague lied to the House of Commons when he said that the removal of Viktor Yanukovych was in accordance with the Ukrainian constitution, saying “it is wrong to question the legitimacy of the new authorities.

Over the past 8 years, Ukrainian military and US-backed fascist batallions incorporated into the National Guard killed 5,059 people in the Donetsk People’s Republic, including 91 children (figures ontained from Donetsk last week), so the figure for both the anti-fascit republics is probably around 9-9,000 people including well over 100 children.

This war began in 2014 when Ukraine launched the “Anti-Terrorist Operation” (ATO), just over a week after the CIA director John Brennan visited Kiev to meet senior Ukrainian intelligence officials to “foster mutually beneficial security cooperation”.  This was an all-out modern military offensive with tanks, artillery, missiles and aircraft. The ATI was still ongoing when the Russian intervention began last week, in fact, it was being rapidly stepped up.

Millions of Ukrainians have been driven into political or economic exile since 2014, over two million now living in the Russian Federation alone. Many fled as a result of fascist death threats.

Up to 100 anti-fascists were murdered by fascists and nationalists at the Odessa Trade Union House Fire on May 2, 2014. No-one knows exactly how many, since there has never been any investigation.

Where was the media hysteria, and the calls for peace from the left and the peace movement, when men, women, children and the elderly were being bombed and shot by snipers in the Donbass for the past eight years?

Since November, the U.S. has pushed Kiev to launch a new murderous invasion of the Donbass, while claiming that the real threat was from Russia. The U.S. rejected Moscow’s just demands to guarantee Ukraine’s neutrality. Russia recognised the independence of Lugansk and Donetsk on Feb 21 – eight years after the people of Donbass overwhelmingly chose independence in a referendum, rejecting the pro-Western/neo-fascist coup government in Ukraine.

Washington and NATO deliberately and methodically pushed the Donbass republics and Russia into a corner, from which there were only two options: submit or fight back.

The People’s Militias of Donetsk and Lugansk are fighting to drive back the Ukrainian Armed Forces, including neo-Nazi battalions armed and trained by the U.S., Canada and NATO, that constantly threaten the lives of their residents. The anti-fascist military action, forced on Donbass and Russia by the Western imperialist powers – principally President Joe Biden and the US government – has exposed confusion and equivocation in the anti-war movement, even among socialists and communists.

Modern capitalist Russia is not an imperialist country. It had no means to become one after the counterrevolution in the USSR. It is a regional power akin to India or Brazil, primarily an exporter of commodities, not capital. To maintain its independence, Russia had to ally itself with other countries in opposition to imperialism. Ukraine’s coup regime, by contrast, is a pawn of U.S. imperialism that has been waging a brutal war on its neighbours in Donbass for eight years and offered itself as a base for NATO aggression against Russia.

Our responsibility is to stop U.S. imperialism and its wars in all forms, and to stand in solidarity with those who fight against U.S. domination.

. Victory to the Donetsk and Lugansk People’s Republics and their allies!

. Solidarity with the anti-fascist underground and exiles of Ukraine!

. U.S./NATO: Hands off Russia! Get out of Ukraine and Eastern Europe!

This statement is published under the aegis of International Ukraine Anti-Fascist Solidarity, United Kingdom. It is endorsed by Posadists Today.