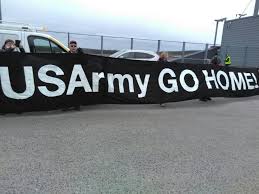 “When, more than five years ago, we had the headline in Il Manifesto (June 9, 2015): “Are the missiles coming back to Comiso?”, this hypothesis was ignored by the whole of the political spectrum and dismissed by so-called expert as “alarmist”. The alarm, unfortunately, was well founded.  This is what Manlio Dinucci says, in The Art of War, 17 Nov 2020.

“A few days ago, on November 6, the Lockheed Martin company, the same that produces the F-35s, signed a first contract of $ 340 million with the US Army for the production of intermediate-range missiles, nuclear warheads included, planned for installation in Europe. The missiles in this category are ground-based, and with a range between 500 and 5,500. They had been banned under the INF (FNI)* Treaty signed in 1987 by Presidents Gorbachev and Reagan. The INF had put out of action the Pershing-2 nuclear ballistic missiles deployed by the United States in West Germany, and the Tomahawk nuclear cruise missiles deployed by the United States in Italy (Comiso), Great Britain, West Germany, Belgium and the Netherlands – as well as the SS-20 ballistic missiles deployed by the Soviet Union on its territory.

In 2014, the Obama administration accused Russia, without any proof, of having tested a cruise missile (acronym 9M729) of the category prohibited by the Treaty. In 2015, the Obama administration announced that: “In the face of the violation of the INF Treaty by Russia, the United States are considering the deployment in Europe of missiles with ground base”. The baton then passed to the Trump administration in 2019, which decided to withdraw the United States from the INF Treaty altogether, accusing Russia of having “wilfully violated” it.

After some missile testing, Lockheed Martin was tasked with making a cruise missile derived from the Tomahawk, and a ballistic one derived from Raytheon’s SM-6. According to the contract, the two missiles will be operational in 2023. They are to be ready therefore for installation in Europe within two years. The geographic factors should be kept in mind: whilst a mid-range US nuclear ballistic missile launched from Europe can strike Moscow in minutes, a similar missile launched from Russia can strike European capitals, but not Washington. If you reverse the scenario, it is as if Russia were deploying intermediate-range nuclear missiles in Mexico.

One must not overlook either that, according to Raytheon, the SM-6 concentrates in itself “the functions of three missiles”: anti-aircraft, anti-missile and attack. The nuclear missile derived from the SM-6 can therefore be used from the ships and the land installations of the “US European shield”, whose launch tubes, Lockheed Martin tells us, can launch “US missiles for all missions”.

In his statement of 26 October 2020, President Putin reasserted the validity of the INF Treaty, declaring the US withdrawal a “serious mistake”, and Russia’s commitment not to deploy similar missiles until the US deploys theirs’ at the edge of its territory. He then proposed to NATO countries “a reciprocal moratorium” and “reciprocal verification measures”, this being reciprocal inspections at missile sites.

The Russian proposal was ignored by NATO whose Secretary General Jens Stoltenberg reaffirmed on 10 November that “in such an uncertain world, nuclear weapons continue to play a vital role in preserving peace”. Not a peep came from the European governments or parliaments, in spite of Europe running the risk to stand at the forefront of a nuclear confrontation similar to, or even more dangerous than that of the Cold War. If your concern is outside the Covid threat, we don’t talk about it…

The European Union, of which 21 of its 27 members are part of NATO, had already made its position clear in 2018 when, at the United Nations, it rejected the resolution presented by Russia on the “Preservation and respect of the Treaty on nuclear forces at intermediate range”. In doing this, the EU de-facto agreed to the installation of new US nuclear missiles in Europe.

What will change when Joe Biden enters the White House? Seeing how Democrat Obama worked for nuclear confrontation with Russia, and how Republican Trump made this worse by tearing up the INF* Treaty, isn’t Democrat Biden going to approve the installation of new US nuclear missiles in Europe?

Comiso is an air-force station in Sicily where the US used to have a base in the past.