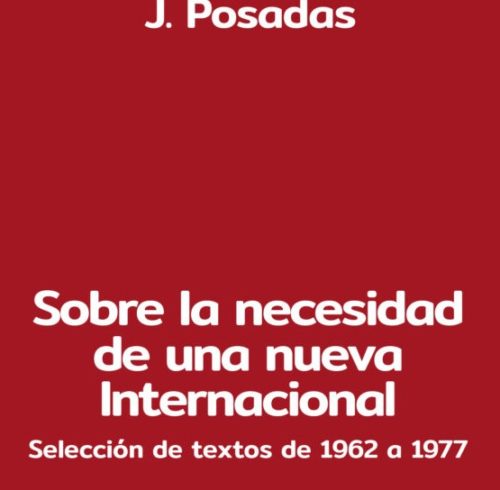 We publish below the presentation to the book titled: “On the need for a new International”. This book was presented in Caracas for the 18th International Bookfair of Venezuela in November 2022. It contains a selection of texts by J Posadas from 1962 to 1977. It also features the 2009 Hugo Chavez’ appeal to set up the Fifth International.

As already developed by Lenin in his book, “Imperialism, the supreme phase of capitalism“, the capitalist system can no longer survive without destruction and war, through either a fierce competition between the different capitalist states, or an antagonistic struggle against the Workers’ States and the Revolutionary States. The Workers States are states in transition to socialism. The Revolutionary States still work in a capitalist framework but already operate many social transformations.

In 1992, when the partial disintegration of the Soviet Union took place, the world’s right-wings proclaimed that every socialist project had been a failure and that “the end of history” had arrived.  Much pessimism settled in layers of the communist movement from not understanding the roots of this retreat in the USSR. They saw it as a failure of socialism.

What this partial disintegration of the USSR revealed however, was the imperative need for humanity to give itself a world revolutionary leadership in order to spread the form of the Workers State over the entire world. For the Workers State cannot proceed any further towards socialism without defeating the world capitalist system. It is to that end that the construction of a new International remains essential. An International able to retrieve the experience of the Soviet Union and that of the subsequent socialist revolutions.

The world capitalist system today is in a crucial phase of its agony. In all the sectors of the populations, a profound questioning of the legitimacy of its regime is emerging.

There is reanimation in the Workers States that still defend socialism. New revolutionary powers are emerging too, as in Venezuela, even from amongst sectors of the population that used to be the servants of capitalist power. Hugo Chavez used to say: “The Bolivarian revolution is peaceful, but it is armed. It is a socialist revolution.”

In the world as a whole, and in Latin America in particular, the political changes tend to confront the imperialism of the US and that of the EU[1] united through NATO. The war in Ukraine throws up new questions around the world. It is not a war between two countries, but the growth in a process leading inevitably to global confrontation between two antagonistic systems. Imperialism sees Russia & China as “the enemy” to eliminate. This is openly declared in NATO’s “New Strategic Concept”.

With the participation of more than 200 parties and organizations from all over the world, the Chinese Communist Party felt impelled to convene a World Forum about today’s Marxism. In Cuba, the convocation of meetings between Marxist theoretical journals from all over the world – and regardless of parties – had the same meaning. What the polemic now developing between various communist parties around the world reflects, is this aspiration to unification on a one hand; and on the other, a fear to confront the 3rd World War that capitalism prepares, to advance a common program and a socialist perspective.

The publication of several texts by J. Posadas[2] on the need to build a new mass International with a program of social transformations on a world scale, is part of our contribution to this great debate.

We show here the Spanish cover pending the English version.

[2] The creation of the Fourth International and its function in History, a selection of texts by J Posadas 1962-1977. And The Thought and Actions of Marx and Engels, J Posadas, 1972.