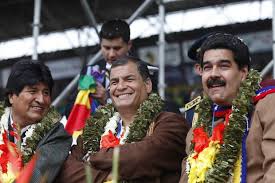 In Venezuela, the right-wing lost the National Assembly in the mid-term elections of 6 December 2020. The Chavist Grand Polo Patriotico won with 68% of the vote, despite years of blockade, sanctions and the US & EU economic war. The aim of those countries is to provoke disaster, mayhem and discontent, to destroy the social base of the revolution.

Rafael Correa (RC) was the first ex-president to land in Caracas as an official observer of the poll. He had come to witness these elections along with the Colombian Senator and Human Rights activist Piedad Cordoba, Evo Morales of Bolivia and 3,000 international observers. The ex-Spanish president Zapatero praised the pluralistic nature of the elections and the absurdity of the EU in giving support to the Venezuelan far-right and fake-PM Juan Guaidó. Rafael Correa rails at the enormous amount of disinformation aimed at the Bolivarian country: “We are told that Venezuela is a dictatorship and that its model has failed – but it is under blockade”.

CG: How important are these legislative elections in Venezuela?

RC: In Venezuela, democracy in lives on. There are radical right-wing groups for whom there is only democracy when they win. This parliamentary election is exactly the same as the one in 2015 when the Maduro’s government lost and the opposition won. For those groups however, the 2015 elections were fair, and the present ones where they did not take part, are not.

In Venezuela, events are amazingly and completely distorted. In politics, those on the right call Venezuela a dictatorship, and in economics they call it ‘a failed model’, never mind that it is under blockade. The country has to have a war economy. Imagine someone bombing Chile tomorrow, and then claiming that neoliberalism has failed.

CG: Speaking of war economy, how do you see Venezuela from the particular angles of the blockade, the oil and Nicolas Maduro’s decision to open up to private capital?

RC: I don’t know how Venezuela survives; things are terrible. You might think this is a fantastic story – a bad joke. The country which once had more than $ 50 billion in oil revenues is no longer getting 500 million. One hundredth of that amount. This is how serious the situation is, a brutal blockade. In these circumstances, more flexibility is needed in the legal framework to attract foreign investment. This is what President Maduro did with the anti-blockade law and I totally agree. We cannot ignore the consequences of this blockade. I do not understand the analysts and pseudo-professors who talk about the failure of Venezuela’s economic policies, and migration, without mentioning how the country is stuck, how it is in a war economy.

SG: What is the intention of this politico-mediatic right-wing? In Argentina for example, it has leaders like Patricia Bullrich, the president of the PRO (Macri’s party) calling on people not to vote?

RC: For these people, an election is only fair when they win; and democracy exists only if it serves their interests. When the risk arises of some change to alter this democracy, they don’t try to change things. We just get coups, destabilisations, etc. When this lady realised that her ally in Venezuela was not going to win, she started rubbishing the election and speak of abstention.

SG: How do you see the current situation in Ecuador, the duo Arauz-Rabascall, and the way you are banned?

RC: Triumphant. We work in the idea that every vote must be fought for, even if all the polls favour us. Many see us winning in the first round (7 Feb 2021), that’s the good side of the story. The bad side is that the Lenin Moreno government knows this. For this evil government, the worst thing that can happen is our victory. They will have nowhere to hide. We are not looking for revenge, but justice. They committed terrible crimes: corruption, political persecution, they showed they are capable of anything, absolutely anything …

The right-wing duo which registered in Ecuador on 18 September has been challenged many times in the past. It is not yet officially registered, and two months on, it is not very strong despite leading in all the polls. Likely they will use the pandemic to try and postpone the elections and work out a way to beat us. They may break the electoral rules, adopt a last-minute candidate, force a second round – and in that second round, close their ranks against us. They are desperate, but we are optimistic and enthusiastic.

Cynthia Garcia recalls another interview where Rafael Correa told her of the persecutions that went on in Ecuador under the Lenin Moreno. That was when Cynthia interviewed three Ecuadorian citizens now exiled: Rafael Correa himself, now convicted and threatened of arrest in Ecuador; Fernando Alvarado, a former civil servant and campaign leader for the Citizen Revolution, and Gabriela Rivadeneira, an important cadre of Correa’s team and former President of the Ecuadorian Assembly. Each recollected the hair-raising story of when they had to flee the country, when the state’s repressive apparatus was after them. They remembered their friends calling them to say, as in the case of Rivadeneira and Alvarado: “Dump of your cell phone, grab your things and your children, go now, they are looking for you!”.  Fernando Alvarado lives here now, in Venezuela. Gabriela Rivadeneira is a former Ecuadorian MP now living in Mexico with her two children[2]. She tells how Mexico, after almost 40 years of inactivity, opened its doors to political asylum when President Andrés Manuel López Obrador granted her refuge.

SG: How can the countries of the region get out of the external debt and pandemic situations?

RC: To overcome the pandemic, we are going to need external help and funding. It will be better to do it at regional level, in a coordinated way, to be more present at global level. Argentina is a special case. It received the largest financing in IMF history but it used it in an absolutely irresponsible way; not to finance roads, hydroelectric plants or increase its reserves, but to finance the flight of capital. Argentina finds itself in debt, its economy in crisis, and its money gone out of the country.

SG: A few minutes ago, you said that in 2015 “it was not Macri but Clarín (the biggest press and media group in Argentina) who triumphed”.

RC: Until we resolve the media issue, there will be neither democracy nor development in Latin America. Sometimes we don’t give this the weight that the issues call for. What are the media doing? Informing? In principle, they should be the keepers of the truth, but in Latin America, they were the first to steal this truth. And without truth, without information, we have no democracy, no free elections. We are manipulated, there are no correct political decisions, no correct bases for political action. Without these, there cannot be and there will not be development. The biggest opponents of the progressive governments are the media.

[2]  Gabriela Rivadeneira became student leader at the age of 16 in Otavalo, an indigenous town to the North of Ecuador. On 14 May 2013 she was elected to parliament, and a short time later, she became the first Woman Parliamentary Speaker of Ecuador, at the age of 29, in the government of Rafael Correa.