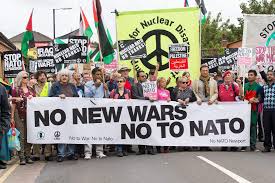 THE US BURIAL OF THE INF TREATY WITH EUROPEAN COMPLICITY. The Pentagon has decided to install medium-range nuclear missiles in Europe, which would turn this territory into a battle-field in case of a war between the two Great Powers. It’s no surprise that NATO and the European Union have approved the suicide of the European nations.

This article is by Manlio Dinucci. It was published in Il Manifesto, 6.2.19. Editorial. 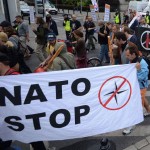 The « suspension » of the Intermediate-Range Nuclear Forces Treaty (INF), announced on 1 February by Secretary of State Mike Pompeo, has launched the count-down which, within six months, will count the United States out of the Treaty definitively. As from today, in any case, the USA considers itself free to test and to deploy weapons of the category forbidden by the Treaty – ground-based medium-range nuclear missiles (between 500 and 5,500 km).

The collapse of the INF Treaty was also helped along by the contribution of the European Union which, at the UN General Assembly on 21 December 2018, voted against the resolution presented by Russia on the « Preservation and implementation of the INF Treaty », rejected by 46 votes against 43, with 78 abstentions. The European Union – of which 21 of its 27 members are also members of NATO (the United Kingdom remains a member while leaving the EU) – rallied unanimously to the position of NATO, which in turn rallied unanimously to that of the United States. In substance, then, the European Union has also given its green light for the possible installation of new US nuclear missiles in Europe, including Italy.

Since it has on its territory nuclear weapons and US strategic installations, with the Muos* and the Jtags in Sicily, Italy is exposed to growing dangers as an advanced base of US nuclear forces, and thus a target for Russian forces. A medium-range ballistic nuclear missile takes between 6 and 11 minutes to reach its target. A fine example for the defence of our sovereignty, inscribed in the Constitution, and for our security, that the Government guaranteed by closing the door to migrants, but opening it wide to admit US nuclear weapons. 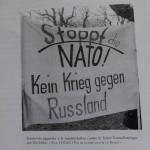