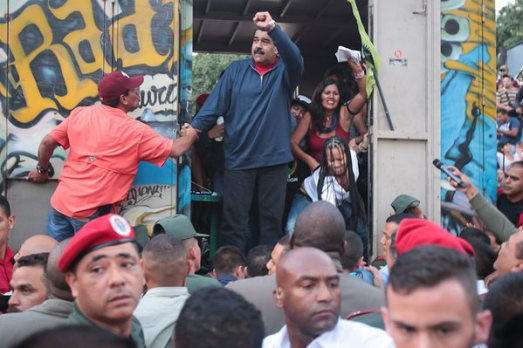 SUMMARY OF TWO ARTICLES ON THE SITUATION IN VENEZUELA FOLLOWING THE DECEMBER 2015 ELECTIONS – From http://Venezuelainfos.wordpress.com –

The reader will find below the summary in English of two articles on Venezuela that appeared on the French part of the Venezuela Infos site.

The first article: “Landscape Before Battle” 9.12.15 is by Thierry Deronne. The second article: “Notes for a less dramatized picture of the 6 December elections” 15.12.15 is by Luis Salas Rodriguez.

Summary of the first article:

Now that two-thirds of the MPs are right-wingers, Venezuela seems on the threshold of a neoliberal order. How to understand the new mobilisations of the popular assemblies, and the declaration of the state of emergency by the trade unions – when only three days ago many of these were not campaigning for the Bolívarian candidates?

When Chavez was elected in December 1998, many revolutionary institutions were taken over by “Chiriperos”. These were layers of employees donning the red shirt from one day to the next, often casting genuine revolutionaries aside. With the anguishing economic war, the corruption and indifference of these people became intolerable. What had been needed instead was strong protection, a State more efficient, more participative and readier to listen to the citizens.

The “changes” promised by the right-wing were interpreted to mean an end to the economic war: with the return of the private sector, goods would come back on the shelves, and the queues would disappear. But already the right wing tells us that there will be no quick-fix to the economic problems, and that priority must be given to changes in the social benefits and the law. The Fedecamaras (organisation of traders and private bosses) wants the National Assembly to do away with the Law of Labour.

To end that Law means to end wage rises, protection against sackings, maternity-leave, the controlled working week, the free Saturdays, the overtime payments, the food vouchers. The trade unions have announced street mobilisations and demand the nationalisation of the bank.

As the leader of the opposition Ramos Allup threatened the parliamentary television chain ANTV, calling it “a cesspit”, the government handed it over to its employees integrally. President Maduro is to decree a law to protect the public service workers by extending the ban on sackings from 2016 to 2018.

The right-wing leaders do not hide that they want to roll back most of the gains of the revolution: the price controls, the ban on OGM seeds, the agrarian reform, the tenants’ protection, the free education and health, the construction of public housing, the pensions, etc. They plot the privatisation of the oil and other resources with the United States. They want to scrap the existing energetic agreements with the poorest countries of the Caribbeans. They seek amnesty for the militants of their local version of ‘Golden Dawn’, and its leader Leopoldo Lopez, who perpetrated murderous acts of violence that left 43 dead in 2013 – most of them Bolivarians, plus six soldiers shot. The world mass media say that such people are only in jail for their opinions, but they are planning the fall of the Bolivarian president Maduro through some parliamentary coup, similar to what was done to Fernando Lugo in Paraguay.

Not a simple thing to make a revolution

See the difficulty in building a socialist revolution without democratising property or the media. Without breaking out of the cultural prison of mass consumption, you continue with the invisibility of labour, the fragmentation of the world and the passivity of the spectator. The Ministry of Culture demonstrated that television remains the preferred media outlet, and that most people associate Venezuela to the image of Venevision or Televen – “pretty landscapes-pretty women”.

How to go about large scale communal production without the land being given central stage, seen as the source of life and of food sovereignty? How to turn the media into a space of articulation, popular action, criticism and participation, whilst the Anglo-Saxon model of social communication – “to sell a message to the client-target” – remains the norm?

Two things can happen now: There can be a retreat of the Bolivarian camp, the repression of social resistance, waves of privatisations and the return to exploitation and misery – all in the silence of  international media. This happened in Nicaragua when neoliberalism returned there between 1990 and 2006.

However, the right-wing policies may stimulate new popular mobilisations. President Maduro intends to organise a meeting with the social movements and the PSUV (the United Socialist Party of Venezuela). With 42% of the votes, the Bolivarian revolution maintains a remarkable grounding. With two thirds of the MPs, the right has a large margin for action, but Chavism still has the government and the presidency, the majority of the regions and town halls, and the support of citizens’ networks like the communal councils, the communes and social movements. If the president manages to re-boot quickly upon new bases, and if all the transformative energies reconnect quickly between them and act from below, the lesson will have been a profitable one.

Summary of the second article:

“Notes for a less dramatized reading of the 6 December 2015 elections in Venezuela” by Luis Salas Rodriguez, 15 December 2015.

It follows that the present situation is not without precedents, and it is not final. We have faced similar situations before, and we surmounted them. The Chavist vote oscillates more than that of its opponents because it is more critical, thoughtful and discriminating. What should trouble us is not so much the gain of the others as our own losses.

All counted, the electoral results of Sunday 9 December 2015 give 44% to Chavism and 56% to MUD. Note how MUD doubles the number of its MPs with these extra 12 points. This raises other questions about circuits, representativity, etc.

The time has arrived for the opposition to demonstrate that it really believes in pluralism and the independence of the powers. In Argentina for instance, Macri is going to have to deal with Congress. Today, the party FPV stands in opposition to the Executive, but it is in the majority in Congress and in [some] governorates. Macri does not have carte blanche.

We tend to overlook a big element in our favour: Now we can give battle in real-time and directly around the matter of [political] models. Among the proposals of the opposition, the main one poses amelioration and progress – but this must mean more than ending the queues. People must have stable jobs, decent salaries and affordable prices, and be able to exercise their social and economic rights.

This is incompatible with the notion of ending the guarantees to the workers as detailed by the Law of Labour which the opposition wants to suppress; it is incompatible with the elimination of the Law of the Just Price, and others. Just as happened in the conflict between the right and the Bolivarians (about workers’ sackings which are forbidden in Venezuela), we are now going to speak out, in real-time, about economic and social models; people will have to choose between the models that guarantee their employment, their dignified salaries and their rights, against those predicated on the need to suppress those rights. We leave off looking back to the past because the confrontations are now about the present and the future. The right-wing must now explain to us just how it expects to be conducting its “change”.

End of the summaries.

Photos: thanks to Orlando Herrera and to Milangea Galea