COVID-19: THE VENEZUELAN MODEL THAT THE MEDIA HIDES: On 20 April 2020, the World Health Organization (WHO) which had sent its experts to Caracas confirmed that only 9 deaths had been recorded in Venezuela to date. In the population of 31 million (1), there have been 256 cases and a 45% recovery rate. Despite the US blockade and cranked up sanctions by the Trump administration, Chinese and Russian cooperation with Venezuela continues. Airlifts are coming too from the World Health Organisation (WHO) and from the Red Cross. Hundreds of tons of gloves, masks, gowns and screening kits have been arriving for weeks.

Note: This article by Thierry Deronne dated 20.4.20 shows how the Bolivarian Revolution stays victorious through the respect that the revolutionary leaders inspire in the Venezuelan population; and through their ability to count on the intelligent, humane and collective organisation of the forces of progress internally and internationally.

Public consciousness and discipline adds its effects to the density of the public healthcare networks, the general measures of confinement, the “Barrios Adentro”, the massive use of the test and the wearing of masks. Well before the start of any infection, the President Nicolas Maduro had already decided upon these things. “The facts speak for themselves”explains the ex-President of Ecuador Rafael Correa, for whom the way Venezuela has put the brakes on the Covid-19 is exemplary in Latin America. A far cry from the neoliberal regimes who cause the death of thousands of women and men by putting the economy before human life.

This success is also explained by the way the government has created a digital record of all details collected in its “Carnet de la Patria” platform survey. The latter was set up when the government sought to protect the working-class families from the worst effects of the US economic war. On 20 April, 18,637,699 citizens had responded to a call from the platform. Those who reported symptoms were quickly visited by doctors who went to screen and test them. And of course there are the Social Missions of Venezuela, otherwise called the “Barrios Adentro”. These [social] networks originally set up with Cuba’s help are now helping in ‘massifying’ the test. Over 300,000 tests have been carried out already.

Why do the mainstream media conceal this?

Why did the world media hide the measures that President Maduro took to protect the working class? Why aren’t the media reporting how thousands of exiled Venezuelans are now returning for fear of the Covid-19 outbreaks in Colombia, Peru and Ecuador? Why don’t they say that these people had originally left Venezuela to save themselves from the effects of the US blockade – an action that they (media) had attributed to the “bankruptcy of socialism”? The reality is that there are no social provisions in Colombia, Peru or Ecuador for these Venezuelans, most of them self-employed anyway. The roads to Colombia are once again full of migrants, going the other way this time.

Despite the US maritime blockade and currency attacks, the Bolivarian government endeavours to maintain the basic social services. The Brazilian journalist Fania Rodrigues who lives in Venezuela speaks about the returning migrants. They come back, she says, because it is here in Venezuela that their parents live. This is where they have their roots. At the borders, the Venezuelan protocol is to guarantee them free medical assistance. Before setting out for home, they must accept the test and a 15-day quarantine period for which the State puts shelters and buses at their disposal. Thanks to the logistical support of the government, the 910 Venezuelans who returned last week from Brazil were housed, fed and confined for a while, after which they were re-tested and immediately given a mask.

(1)  To follow the evolution of the Covid-19 data in Venezuela and the world, the World Health Organisation has made available this automatically updating real-time chart:   https://covid19.who.int/

The plan is to look for cases all the way in people’s homes. Along with quarantine, the “door-to-door approach” is one of the most effective methods created by Venezuela in the fight against the COVID-19 pandemic.

This daily and recurring procedure never failed since Friday 13 March when the first cases were confirmed of SARS-CoV-2 (responsible for CoV-19). Right now, at least 1,500 Cuban doctors wearing masks and in white coats, are combing the neighbourhoods of the state of Miranda in North-Central Venezuela. They fill forms with the details of those whom they visit, and these visits are not random. They are guided by the information stored digitally in the “Plataforma Patria” –  the government’s database. This platform helps to re-contact those who reported previously, to see how they are doing. No need for the people to crowd the health centres; the doctors themselves go to where people may be infected by the coronavirus-19.

Rafael Crespo Plasencia is a doctor recently arrived from Cuba to help against the virus. He says: “It is us, doctors, nurses and laboratory staff who go in search of people, those who may have been in contact with returnees, or people who have reported symptoms to the ‘Plataforma Patria’ ”. Aware of the pedagogical side of his task, Plasencia adds: “Some people still do not see the risk, or are not quite clued-up in spite of all the programmes on the radio, on the TV. In their homes, we can explain properly to people how to use the mask, how to wash the hands”. People do respect the rules in their great majority, but in a popular part of Petare (periphery of Caracas) he still saw people without masks outside their doors. “It shows a lack of risk-perception” he insists.

How does the Venezuelan Health System work?

In the area of San Miguel Arcángel called “Petare Cemetery”, the Integral Diagnostic Centre (CDI) is on a main avenue. Behind it, the various districts of Petare can be seen rising up the hill through many narrow alleys, passages and stairs – a real labyrinth for one who doesn’t know the place.

The CDIs belong to the second tiers of health. The “Barrios Adentro” clinics are the first tiers and the hospitals are the third.  Along with the consulting rooms, the CDIs form part of the health architecture built in collaboration with the Cuban medical missions in the country at the start of the Bolivarian Revolution.

The key element to this health system has two central parts. Prevention is one, and community participation is the other. In the strategy against the coronavirus, these are the two pillars. On their way to visit a particular district, the health team starts out every morning from the CDI. On its way, it is accompanied by a person who belongs to one of the many forms of popular organisations in that district: the Municipal Council, or the Commune, or some local committee assigned to production and supply. Norma Josefina Urbina is the member of the Community Council who accompanies Plasencia and the health team up the steep slope. “We accompany the doctors in their home visits. We are always there because we know our community. We know the cases and it saves on the doctors getting a little lost” she explains.

On their way to peoples’ homes, the digital database is the first health-team’s great resource. And its second great resource is the accompanying community members. These know who lives where in the houses. They know those most at risk, those who reported symptoms, those who might not have done so yet. With their knowledge of the area, the community members are the guides for the Cuban and the Venezuelan doctors.

Carlos Luis Oliver Santana is a Cuban doctor who has worked in Venezuela for one year. He says: “The aim is to find anyone with symptoms, especially respiratory ones; and to check on the health of the most vulnerable, the elderly, women, expecting women, people suffering from chronic diseases”.

There are some 37,000 residents in the area of ‘Petare Cemetery’ covered by [this] CDI, and a total of 11,988 have already been visited. This visiting goes on every day without fail. The health group wants to meet those back from abroad and those who have had the virus. Carlos says that wherever they find symptoms or develop doubts, they refer the persons to the CDI where they are immediately tested free of charge.

With a population of some 3 million, Petare is located in the State of Miranda. Out of the 60 CDIs in Petare, 38 are ‘sentinels’. The sentinel CDIs provides a 24-hour service against the pandemic. “They deal with of all the pathologies, but only the respiratory cases linked to Covid-19 are being admitted” says Angel Sierra, the Deputy Chief Medical Officer for the Miranda State.

Fully equipped for this mission, the CDI in the ‘Petare Cemetery’ is one of the 38 ‘sentinels’. At the entrance, a doctor protected from head to toe by a full gown, gloves, a mask and protective glasses, receives the patients with symptoms. People are quickly tested.  Carlos Luis Oliver Santana says: “People cannot go anywhere if they test positive, if they have symptoms without testing positive or if they test positive and have no symptoms”. Persons in that category are admitted to the Intensive Care Unit where they are isolated and observed for 14 days – the virus’ incubation time. They are treated with various drugs like Interferon to strengthen their immune systems. Once out of the hospital, a doctor will visit them at home for seven days to make sure there are no more symptoms.

Angel Sierra explains that each CDI has the resources, the supplies, the drugs and the equipment to deal with coronavirus-19. In Miranda, out of the 2,198 members in the Cuban Health Team, an average of 1,600 goes out to investigate, and the rest dispenses care.  Angel Sierra adds : “between 49,000 and 52,000 patients are seen every day, and around 500 are found with respiratory symptoms every day.”

In Venezuela, the struggle against the coronavirus is a model:

The door-to-door method is a great success. It rests on the supports that Venezuela has already put in place in the field of Health and in the field of Popular Organisation. The door-to-door method is reinforced by the medical supplies coming in from countries like China, Russia and Cuba. Add to this the aid from the international agencies, the Red Cross and the Pan American Health Organization PAHO (which is the WHO’s regional arm).

Door-to-door has allowed the fight-back. Thanks to screening in each household, early detection is possible and the patients are saved from complications. The door-to-door method breaks the virus’ transmission chain. It stops its expansion, which can be very rapid, as we saw happening in Italy and Spain for example. It is partly due to this method that the curve of infection has stayed flat in Venezuela. The role that Cuba plays is  central, just as it has been when it helped in building portions of the health system at the start of the Boliviarian Revolution. The Cuban doctors are here every day, in the hills, with their white coats, with their masks. They go from door to door asking questions, giving advice, contributing in this way to the fight against the pandemic.

To consult Covid-19 figures in Venezuela and around the world, WHO has posted a real-time map: https://covid19.who.int/ 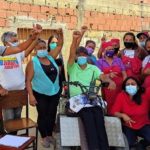 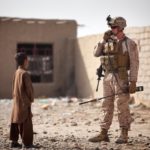 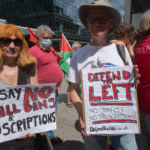