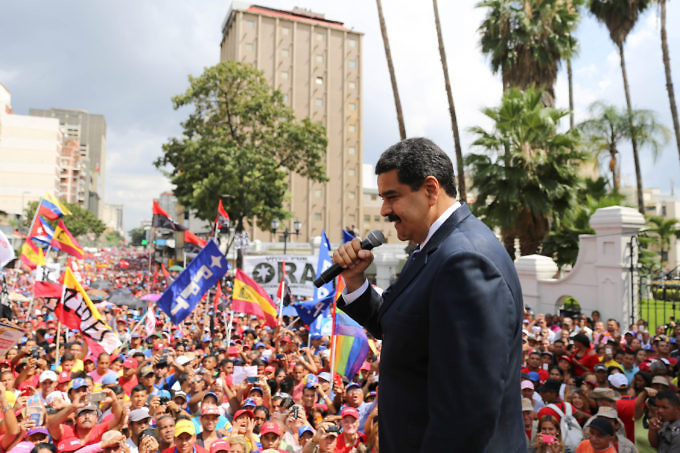 IN DEFENCE OF THE REVOLUTIONARY STATE: A RECENT PRESIDENTIAL DECREE MAKES OFFICIAL THE ‘WORKERS PRODUCTION COUNCILS’ (WPCs) OF VENEZUELA. President Maduro  had prepared for this at a large meeting of 8 November in Caracas.

On 8 Nov 2016, the 7,000 people attending were exclusively workers’ and militias’ delegations. On that occasion, President Maduro and the Labour Minister Oswaldo Vera  explained the urgent need to create new forms of control over production, productivity and economic activity.

Himself a public transport worker in the past, President Maduro called on the grass-roots Committees, the workers’ control committees, the communal councils, the Claps (Local Committees for Supply and Production), the Young and the Cooperatives. He proposed that they set in train new production initiatives and projects to satisfy the internal market and create jobs. In his words: “We must create our own capital, and use it, without it touching world finance and the world bank”.

The workers of Venezuela, and the Claps, have recovered a number of enterprises and created Workers Control Committees[1] in them. Now, the leadership of the Bolivarian Revolution wants to shore up the Revolutionary State’s defences against internal economic sabotage. The latter is an important source of destabilisation, malaise and social discontent; and it is useful tool in the hand of the putschists and reactionaries, particularly on top of the international boycott kept going by the banks, air-companies, multinationals and others.

The Maduro government gained precious time when he managed to divide his opponents. This forced these opponents to negotiate, and postpone their campaign for the immediate destitution of President Maduro and call emergency elections. This is only a postponement, however. This is time gained, but it must now be used to fight without quarters against the economic and social criminality imposed on the country.

The right-wing has little social support:

In leading a round-table, Pope Francis allowed political gains to be made. This opportunity must now be used to stop internal criminality resolutely.

The right-wing lacked social support for its aims, and this is positive. Fake general strikes could be triggered, attempts at ‘storming Caracas’ and marches on Miraflores (the government palace), but these things were not followed by mass mobilisations. The great mass of the population did not follow these initiatives, whilst the Chavist vanguard kept up (and still does) a high level of vigilance and riposte in the streets.

At the 8 November meeting, President Maduro denounced “the conspirators” directly: corrupt people in society, bureaucracies, thieving managers of enterprises and warehouses who hand over the food of the country to the “bachaqueo” smugglers. The latter is a mafia that re-sells profitably the cheap products subsidised by the State. This trade takes place on the black-market internally, and externally by playing on the international prices.

The president recognised that it was a major error, in the past, to keep economic functioning dependent on oil production and revenues. This led to a lack of industrial and economic development within the country itself. Now that this is going to change, the development of internal production will mean less imports, and it will be easier to balance the books.

The population of the country faces grave shortages in the shops, but many of the missing products can be produced in the country. Their quality and quantity, besides, will be guaranteed by the law of just distribution at the just price.

Wages keep being raised to make up for inflation. This helps. It protects the purchasing-power of the workers to some extent, but it is not enough. One must consider the precious time that people lose in waiting in queues, chasing-up black market products, or running around to find essentials items or medicines.

In an enterprise, the WPC is formed of one woman, one youth and one Militia representative previously elected by the workers of the area. There is also one soldier on the WPC. He or she comes from the military unit of the zone.

The aim of the WPC is to control the whole cycle of production: From the raw material to its transformation; from the quality of the finished article to production time; from distribution without theft to the determination of the just price payable by the consumer.

There are WPCs both in the private and the public sectors. To get them started, the Ministry of Labour organised hundreds of Workers Assemblies. Nationally, 700 of these have won recognition, and 600 are in private enterprises. The most recent figures are not available just yet, and their actual impact is not yet known.

Boosting the internal market depends on investments, and these are made insecure by sectors of criminality within. The WPCs have a role to play here. If ‘patriotic entrepreneurs’ work with a WPC, they lose some of their freedom to take decisions, but they are sure of guaranteed results in the end. This is an advantage for them, particularly in this period of acute capitalist crisis.

For the workers, the WPC is an experience of popular participation in the economic programming of the country. It is bound to give an important impulse to the Revolution, and the Revolutionary State stands to win more control over its economy.

Through the WPCs, the working class has a chance to demonstrate its capacity to transform the economy and to advance socialist measures. Of course the employers’ class stands to lose its principal functions and become superfluous. The WPCs are a definite progress in the class struggle of Venezuela.

The fact that each WPC includes a representative of the Bolivarian armed forces is very significant. It consolidates the civil and military alliance that already exists in the country. In this fierce phase of the class struggle where the bourgeoisie engages in economic sabotage, the WPCs are particularly useful. The WPCs are powerful bulwarks against economic criminality.

In the functioning of the country, the popular militias – and all the aspects of workers participation, particularly with the Women and the Youth – are guarantees of greater objectivity. Each WPC necessarily experiences the need to raise productivity, investments and the discipline of labour. It confronts the question of the why and the how of what the country produces. In the WPC, the workers’ preoccupation no longer stops at better pay and working conditions. It is now concerned with the quality and the quantity of the finished product, along with its price and its social usefulness.

The WPCs are a big opportunity to increase the leading role of the working class in society. The revolutionary process has improved in Venezuela to the point that the working class is now able to show its great capacity to the rest of the population.

What the Maduro government started with the WPCs as organs of workers’ control on a large scale is very important – but it has its limits. It is not enough for the workers to control production better. They must also be allowed to increase their weight in the PSUV and in the Trade Unions. The working class needs be able to address the whole country, and generalise there each of its experiences. In such a way that all its initiatives and all its measures of control end up serving a national plan.

The PSUV, the other parties of the Bolivarian Revolution and the Trade Unions need to make a balance of all the achievements to date. For example, what have the committees of workers control achieved in the recovered enterprises? How do the Trade Unions commit to the various economic initiatives?

On the occasion of the above-mentioned Caracas meeting, an interesting dialogue started between Maduro and a group of workers who produce cement. In front of all the workers gathered, the President denounced the robberies and the ‘bachaqueos’ in the Cement industry. Hearing murmurs between people on the platform, Maduro proposed to change his example and mention other industries. But the workers in the room reassured him: “No need! We are with you! Count on us!”. This debate made public the fact workers’ control is the answer to economic delinquency and arbitrary closures.

As much in the PSUV as in the Trade Unions, the changes taking place in the country require a qualitative elevation, if only to avoid false expectations from the new measures, or disillusionment.

The Revolution has ‘gained time’ against the process of internal reaction, certainly, but international counter-revolution goes on attacking. US and European international banks (and others) put obstacles in the way; they trash the international commercial relations of Venezuela. They stop the State buying and obtaining credit. The present governments of Argentina, Brazil and Paraguay manoeuvre to get Venezuela expelled from Mercosur[3] for instance.

Some social respite has been won within the country. This must translate into increased efficiency and deeper levels of social participation. The evils that Maduro mentioned – corruption, bureaucracy, thefts and mafias – have caused disillusionment and malaise in the population. The WPCs must be allowed to remedy this, and very quickly.

From our correspondent in Caracas, Nov 2016.

[2] The PSUV is the Unified Socialist Party of Venezuela. It is the mass political party of the Bolivarian Revolution.

[3] Mercosur: It is a ‘Common Market of the South’. It includes Argentina, Brazil, Paraguay, Uruguay, Venezuela and Bolivia. On 3rd of December 2016,  Mercosur “suspended” Venezuela for its “lack of internal democracy”. 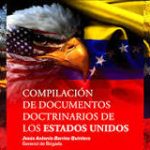