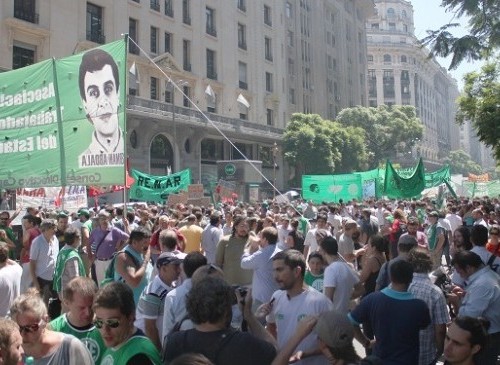 AFTER THE ELECTORAL VICTORY OF THE RIGHT –

The new Macri government hurries to suppress the gains won by the Argentinian people under the previous administrations.

Background notes: For 12 years Argentina was ruled by Peronist presidents: first by Nestor Kirchner (2003-2007) and then by his wife Cristina Fernández de Kirchner (2007-2015). In the presidential elections of 22.11.2015, Cristina could not stand again. Her Peronist successor-candidate Daniel Scioli[1] was beaten by the right wing leader Mauricio Macri[2]. The article below assesses the electoral results, their consequences and what is to be done. It is followed by a list of the very important social, economic and political conquests won by the masses during the last 12 years of Kirchner governments.

Now president of Argentina, Macri exacerbates the social conflicts; but he has his work cut out, and he knows it. He will have to serve the oligarchy, the multinationals, and the financial sectors above all. These latter want access to the ‘treasury’, public and private, accumulated in the ‘kirchnerist’ period.

The masses are aware that blow by blow ripostes are going to be needed against every provocation by Macri. The movement that grew under the Kirchners is going to need more political ability and efficiency. The mass assemblies now taking place in the parks and the squares, must encourage debates in every locality, school and workplace, all over the country.

The aim of the mass sackings now happening, particularly in the public sector, is to lessen the social weight that the working class acquired in the last few years.

Bulldozer like, the right wing government is on the attack. Its emergency decrees favour the oligarchy, the agrarian bourgeoisie, the big multinationals and the top media proprietors. Meanwhile, the government is cracking down on social protest. A notorious case is that of Milagro Sala, leader of the Tupac Amaru movement in Jujuy[3]. She is Macri’s first political prisoner.

The terror campaign started by Macri is after the undoing of the FpV[4]. This is made easier by the weakness of the provincial alliances between the FpV and the old Peronist and Trade Union caciques[5]. Some of the latter are already shifting towards ‘Macrism’ and moderation. Some MPs and senators are wavering, and an important sector of the trade union bureaucracy is preparing to bend the knee, once again.

Macri shows his servility by courting the US government and the continental right wing. The US government congratulates him. The IMF lauds him. He is invited to Davos. This mediocre politician is vaunted as the hero to restore order, refund the vulture funds and smash Latin American unification. He promises to repay the speculators – offering them more than they ask for! He must rely on international support, because his policies stand no chance in Argentinian society.

Those landed with the struggle against Macri are not just the FpV but the whole of Latin America. The situation in Argentina challenges the whole social and political laboratory built by Chavez, Kirchner, Morales, Correa, Ortega, Lula[6], and with Cuban participation. As the oil price collapses, along with that of other raw materials, the expansionist policy cannot continue. An open imperialist attack is to be expected. Any movement of resistance In Argentina must unite with anything similar in Venezuela and Brazil, and acquire a Latin-American and anti-imperialist character.

In Venezuela, the parliament heavily dominated by the right tries to reverse the constitutional gains of the Bolivarian Revolution. Those gains represent a counterweight able to control certain functions of state. The reactionaries want this scrapped, and to get this, they count on the support of world finance capital and their allies in the local oligarchy. These people will do anything to stay put.

There used to be strong anti-Macri sectors in the parliament and Senate of Argentina, but Macri bought off quite a few of them. The country faces the limits of the institutional controls established by the left governments. As long as the bourgeoisie and the international banking system are not dislodged from the key sectors of the economy, they can reorganise and control.

This situation demands a qualitative advance on the part of the left. In Argentina, twelve years of progressive governments raised powerfully the capacity of the masses. These started to expropriate, to control, to participate socially. This potential must be given more expansion and scope. As much in Argentina as in Latin America, the political structures need much greater participative and anti-capitalist powers. Revolutionary cadres must be educated in this conception. Mass meetings and assemblies must be called to discuss this, and on a continental scale.

The working class can only lead society by intervening audaciously. It must be given the chance to demonstrate its ability to replace the bourgeoisie. In Argentina, workers control and the recuperation of factories started mostly where the bosses abandoned or closed down. These initiatives preserved productive sectors and resolved union questions of wages and jobs; but they did not raise the working class into its role as the leader of society.

Kirchnerism is defeated electorally, but it keeps its enormous social and political potential

The reasons why Peronist Scioli complicated the tasks of the FpV and the left must be looked into. Twelve years of Kirchnerism stimulated great social potentialities and hopes, but they also kept going serious economic and political contradictions. The electoral alliances initiated by the FpV turned into obstacles when the need came for bolder social and economic steps. When it could have counted on immense social mobilisations, the FpV proffered only blunders and ill-preparedness.

There was no shortage of generous availability in the young. The population had become politicised all the way to the remotest parts of the country, but the FpV did not inspire confidence. The petit bourgeoisie saw the Kirchnerist leaders hesitate when they faced adverse economic and international conditions and the threat of losing the social gains.

Important social and political advances were made in Argentina[7] over the last twelve years, but the need became pressing to cut out the old bureaucratic layers of the Justicialist Party[8], of the trade unions and of the regional governments. These bureaucratic layers never stopped enriching themselves. They defended personal interests opposed to the policy of Cristina Kirchner.

The movement in support of Kirchnerism continues almost unscathed however. Proof is the immense demonstration that saluted Cristina when she finally quit the presidential building. For a whole day and one night, more than 700,000 people thronged through the squares and streets of Buenos Aires. With the speed of light, the workers mobilised to defend Human Rights, oppose the immediate mass sackings, and Macri’s attacks on the Media Law. The working class does not feel beaten[9]. It has not had a chance to enter the fray because of the trade union bureaucracy has stopped it.

The Front for Victory must be turned into a Front for Revolution. It needs to make itself into a tool to organise the intervention of the masses. It needs to form cadres for this purpose. These cadres defend their progressive ideas all the way.

The nationalisations that have been achieved must be defended. They must be extended and reinforced by workers’ control. They must be integrated into a programme of development that responds to the needs of the population. The great experience that the workers accumulated in Peronist times, plus the twelve years of Kirchnerism, must be put at the service of social transformation, in Argentina and throughout the Latin American continent.

Addendum: The achievements of the twelve Kirchner years:

[1] Scioli was vice-president in 2003-2007 under Nestor, and governor of Buenos Aires after that.

[3] The Tupac Amaru is a neighbourhood Association, part of the Association of State Workers of Jujuy. Jujuy is in the far North-West Argentina, with stunning rocky landscapes and Quechuan villages.

[4] FpV: Front for Victory: A Peronist electoral alliance within the Justicialist Party. It was founded in 2003 to support Nestor Kirchner’s candidacy as President.

[8] Justicialist Party: A Peronist Party led by Nestor Kirchner. Menem, Duhalde and Cristina Kirchner are members of it. It has been the largest Party in Congress since 1989. (Congress comprises the Senate and the Parliament).

[9] On 24 Feb 2016, hospital and government workers walked out over Macri’s economic policies, general cuts, cuts to fuel subsidies, and the sackings of 21,000 public sector workers were sacked, 5,000 of whom were re-hired. 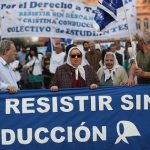