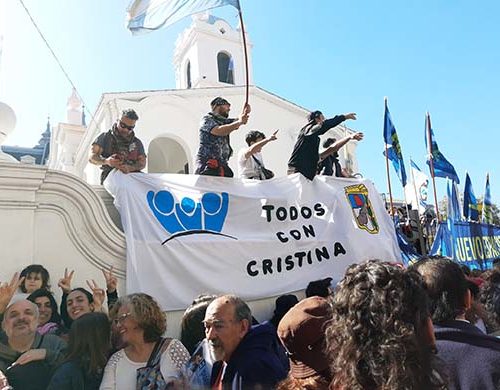 There was the reactivation of an old “Causa Vialidade” (Kirchner’s trial) around public works in Santa Cruz. There was an assassination attempt on her person and now the pronouncement that she is ineligible for public office and must serve 6 years in jail[1]. This does not happen by chance. It illustrates concretely how far the so-called legal system [is prepared to] go against Peronism and ‘Kirchnerism’.  Having passed beyond the phase of media poisoning, that system resorts to the farce of a condemnatory judicial censure which, if it fails, will trigger a violent coup d’Etat.

But of what State are we talking about? That of the mafia and the parallel State supported by concentrated financial power, as vice-President Cristina Kirchner said in her speech. A coup process has started, aimed at the democratic State because it is supported by the political forces of the government’s Frente de Todos (Front of Everyone). The integrity of the vice-president notwithstanding, the human rights of all the citizens are again threatened, 39 years after the defeat of the dictatorship.

In reference to her condemnation, here is an excerpt from Cristina Kirchner’s response: “[This] is a condemnation neither by the laws of the Constitution, nor by the administrative laws nor even by the penal code. It is a conviction that has its origins in a penal system that I called, almost naively on December 2, 2019 “lawfare” (the use of the law against its enemies), and which lately I called the concept of ‘Judicial Party’ – perhaps due to some juvenile formation of mine, or as a theorist and analyst reader. But we are not dealing here with a legal act or a Judicial Party. We face the product of a parallel State and judicial mafia. It gives the confirmation of a parastatal system that decides the life, freedom and property of all Argentines, with its existence outside the electoral results”.

[1] In November 2022, vice-president Cristina Fernandez de Kirchner was sentenced to 6 years in prison and banned for life on holding any public office. She was found guilty of a €1 billion fraud in matters relating to public works. Fernandez was twice president of Argentina between 2007 and 2015. She cannot be arrested for the moment as she enjoys immunity through her governmental role. She has also launched an appeal process.

[2] A town in Argentina’s Patagonia.

[3] The Economist of 15 Oct 2019 reported that “in July 2017 Sergio Moro, a crusading young judge, convicted Luiz Lula, a popular former president, of corruption – sentencing him to nine years in jail for receiving a beachside apartment from a construction magnate who obtained padded government contracts”.

[4] Telesur 5 December 2022 informs that President Alberto Fernandez and the Justice Minister Martin Soria denounce federal judges, prosecutors, officials and businessmen who took a trip to Lago Escondido.  About these people, President Fernandez said: “All of them [are] involved in a perverse game of bribery that seriously affects the proper functioning of the State”.

[5] Folha de Sao Paulo is a Brazilian daily newspaper. On 5 December 2022, News 360 reported that, in that interviews, Cristina Fernandez assumed she will be sentenced in the corruption trial against her.

[6] On the 7 August 2022, the International Press Agency mentioned that a new Federal pact in Argentina would try to create a 25-member court. New members would be incorporated, and “in this way, the future of the country will not be in the hands of a majority of three people, as is currently the case”.

[7] DBpedia says: “The bombing of Plaza de Mayo was a massacre that took place in Buenos Aires, Argentina on 16 June 1955. On that day, 30 aircraft from the Argentine Navy and Air Force strafed and bombed Plaza de Mayo square in Buenos Aires in the largest aerial bombing ever on the Argentine mainland. The attack targeted the adjacent Casa Rosada, the official seat of government, as a large crowd was expressing support for president Juan Perón. The strike took place during a day of official public demonstrations to condemn the burning of a national flag allegedly carried out by detractors of Perón during the recent procession of Corpus Christi. The members of the military reacted after growing tension between the president Juan Perón and his actions against the Roman Catholic Church. Wikipedia says: The number of identified bodies was put at 308, including six children; an unknown number of victims could not be identified. The disregard for civilian lives and the violence with which the act was carried out has prompted comparisons with the wave of state terrorism during the dictatorship of 1976-1983.

[8] Under the title ‘The Dirty War’, Wikipedia reports that in September 1978, a group of businessmen (Magnetto included) had been having shady dealings with members of the military junta. In 2016 (when Macri in government) Federal Judge Julian Ercolini ruled that there was not enough evidence of wrong-doing against Magnetto (and one other), and these were then declared innocent.

[9] In October 2022, the government pushed an Amended Council of Magistrates Reform Bill through the Senate. To meet long delayed legal specifications, it was proposed to expand the Judicial Council from 13 to 17 members. The new panel would include more representatives of the legal and judicial spheres but continue to exclude the Supreme Court.

[10] In 2021, president Fernandez increased state control over the economy. He then produced an executive order expanding the government’s role in the telecommunications sector.

[11] TeleSur informs that, on 5 December 2022, president Fernandez ordered a criminal investigation into the Lago Escondido trip as well as into the [leaked] exchanges between a group of judges, prosecutors, former public officials and former agents of the Federal Intelligence Agency (AFI) of the Cambiemos administration. Formed in 2015, Cambiemos (along with others) nominated Macri for president (2015-2019).

[12] The Puebla Group is a political forum made up of more than 60 current and former Latin American and Spanish leaders. It has strongly condemned Cristina’s sentencing by a court.

Argentina holds the pro tempore presidency of the Community of Latin American and Caribbean States (Celac). The Puebla Group considers this regional integration of “vital importance”. It is the only organization that represents all 34 Latin American countries.

In August 2022, MercoPress informed that the Puebla Group seeks the convergence of the different integration mechanisms that exist in the region, such as the Pacific Alliance, the Southern Common Market (Mercosur), the Andean Community, and the Bolivarian Alliance for the Peoples of Our America (ALBA), among others. Besides its president Ernesto Samper (former president of Colombia), the Puebla Group has among its most prominent members former presidents José Mujica (Uruguay, 2010-2015),  Evo Morales (Bolivia, 2006-2019), Rafael Correa (Ecuador, 2007-2017), Dilma Rousseff (Brazil, 2011-2016), Lula da Silva (Brazil, 2003-2010), Fernando Lugo (Paraguay, 2008-2012), Manuel Zelaya (Honduras, 2006-2009), Martín Torrijos (Panama, 2004-2009) and Rodríguez Zapatero (Spain, 2004-2011); as well as current Presidents Luis Arce Catacora of Bolivia and Argentina’s Alberto Fernández.

[13] La Campora is a political organisation formally founded in 2006. It is strongly Kirchnerista and supported Cristina from the start (2007).

[14] On 24 August 2022, TeleSur reported that the leaders the present ruling coalition in Argentina, ‘the Front of All” (FT), ratified their support for Vice President Cristina Fernandez-Kirchner. Not only the Front of All closed ranks behind Cristina, but “the entire government joined, first with a statement, and then with public expressions from representatives of all sectors of the coalition” Filo News reported. Even the Economy Minister, Sergio Massa, a member of the Renovating Front who had tried to stay out of the discussion, joined in. FT’s Senator Juliana Di Tullio confirmed that social organizations are preparing a large mobilization in support of former President Fernandez-Kirchner, for whom prosecutor Diego Luciani has requested 12 years in prison.

[15] Pedro Castillo was elected president of Peru in July 2021. On 7 December 2022, a judicial coup was triggered against him as he denied charges of corruption and influence trafficking. He attempted to dissolve Congress to stop impeachment proceedings. He enacted a curfew, established an emergency government and called for a Constituent Assembly. He also called for the reorganisation of the judiciary and prosecutor’s office. After his arrest by national police, the Public Prosecutor’s office announced he was charged with breaching the constitutional order. Vice-president Dina Boluarte accused him of a coup attempt, and was soon sworn in as the new president.