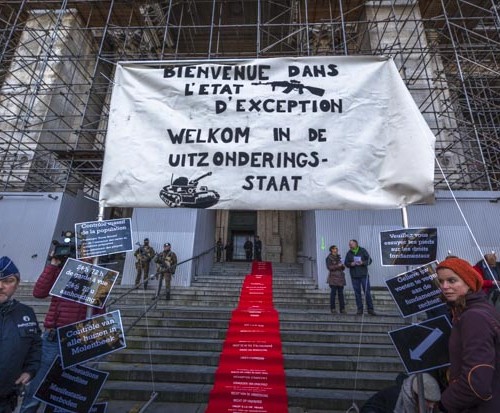 SOCIAL CRISIS, STATE OF EMERGENCY AND OF WAR. WHAT RIPOSTE FOR THE LEFT?  –

Since the November attacks in Paris, has Belgium become a rear-base for Islamist jihad? Can the commune of Molenbeek[1] in Brussels have become the general headquarters of Islamists terrorists? But such is not the ‘feel’ of things for those living there. For them, insecurity does not come essentially from groups of youngsters, so-called ‘radicalised Muslims’, real fascists mercenaries of Daesh and other terroristic groups. Insecurity for them comes mainly from the right-wing government of Charles Michel[2], with its increasingly stringent anti-democratic and anti-social measures and its steady integration of Belgium into the NATO coalitions of war.

The Michel government makes drastic cuts in all the fields connected with social security, education, cultural and associative life, the democratic exercise of justice, workers and self-employed benefits, etc. Meanwhile, it is a permanent state of emergency that the population is made to suffer. And it is the population also that carries the costs of the pro-NATO policies of the government, i.e. the costs of the country’s participation in all the NATO’s acts of war against Syria, Iraq, Libya and other countries in the world. 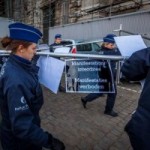 The only growing budgets are those for the police and the army. The ‘strategic plan’ of the Michel government is to hand over billions of Euros to the Belgian armed forces. Again the population carries the cost of the new bomber-fighters loaded with ‘modernised’ nuclear bombs, as well as that of turning the soldiers into sophisticated death-delivering super-armed Rambos.

Belgian and European capitalism does not want to hear of any more migrants from South of the Mediterranean. It was not objecting so much to migrant fluxes when it could use these for social dumping against wages and general salaries. In the EU of yesterday, the ‘right to seek asylum’ and the ‘free circulation of people’ used to be held aloft as standards of European democracy and ‘values’. This is collapsing in Belgium, and the consequences of this crisis of the capitalist system are both devious and very violent.

The State of Emergency – ‘Level 4’ in Brussels and ‘Level 3’ in the rest of the country – is a disproportionate measure of repression in view of ‘the serious and imminent threat’. Some of the right-wing governing politicians go even as far as to say that Belgium, just like France, is in a state of war.

Can it be that the essential problem facing Belgian society is the danger of radicalisation of its Muslim youth? Can it be that against that particular danger, thousands of police and military personnel are the only bastions? In reality, it is all a smokescreen. Behind it, repression is being prepared against the social movements and those who question government policy. This prepares attacks against the social and democratic rights of the workers, against the rights of the majority of the population in this country.

A climate of fear is being whipped up by a deliberate exaggeration of the terrorist threats. This is done with the deployment of soldiers ready to shoot. It is done with tanks in the streets, and with loud police patrols all the time. The decision that led to the closure of all the schools and tube stations for four days in Brussels served the same purpose. And so did the long ban on any gathering or public meeting. The government was taking advantage, behind all this, to convene an extraordinary parliamentary session where it got further restrictions voted against public and private liberties. Suddenly gripped by a sweeping sense of national unity, the MPs of the left as much as of the right voted these restrictions unanimously.

Unlike many political, trade union and associative leaders, the population did not give way to panic! 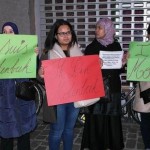 After a few days of dismay, reactions of indignation and multiple acts of combativeness started to appear. Even during the ban on assemblies, several demonstrations and strikes had taken place. The associations in charge of an important Belgian contingent to resist the COP21[3] had managed to demonstrate in Belgium in the same way as had happened in France.

During the emergency period, the young people of Molenbeek called for solidarity, and in a few hours, the communal square was occupied by thousands of citizens from the surrounding communes. A strong associative mobilisation appeared at the Palais de Justice in Brussels, to defend the democratic rights and proclaim a State of Right. This soon led to conflicts in the Socialist party, the Ecologists and even in the PTB[4], against the unnatural way these parties had voted for National Unity in parliament, and accepted 18 government measures.

In the trade union organisations, the pressure exerted from below by enterprise delegates and militants, forced the leaders of the Trade Union Common Front to keep to their plan of rotating strikes region by region. The strike in Hainaut was upheld during the emergency, even if somewhat curtailed. Here are indications of a level of resistance that goes much deeper than appears publicly.

Unity between Flemish, Walloon[5] and Brussels’ workers to fight together against austerity and war 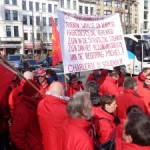 The trade union movement must be the cement that keeps all the workers together, with or without work, with or without papers, men and women, old and young. With the advent of the Michel government, there have been enormous mobilisations, constant strikes and trade union actions, from North to South. These did not manage to dislodge the government, but they caused it to drop some of its worst austerity projects against the workers.

The margin for social negotiations gets clearly narrower and narrower. This is due to governments turning to the right, but also to the way whatever economic growth there is, is not being shared. For indeed the crisis is not for everyone! It is not new that social and economic inequality grows vertiginously, as the rich grow constantly richer, and fewer.

The disputes and the rivalries in the trade union leaderships from North to South – and in the Trade Union Centres – are big blows to the workers. They are much more harmful, in those conditions, than many of the government’s antidemocratic measures. During the last railway strike, the United Front was ruptured at the top. It did not break among the workers however, as the strike was successful, and in the Flemish region too.

The Trade Union Common Front (Le Front Commun Syndical) is indispensable between all those organisations, and between the regions above all, North and South. It is absurd that the top union leaders (FGTB) in Wallonia are now talking about new divisions between Brussels and Wallonia.

The need is for a common platform of demands to increase trade union counter-power against the bosses’ national organisations. There is too much disinterest for the plight of the rest of the European workers, as well as for the plight of those arriving massively from South of the Mediterranean. These are escaping the wars that our successive governments collaborated in. They are escaping the wars that the left parties went along with, whilst silent trade union leaderships obsess about the ‘job losses’ to expect when wars stop being financed, and the tools of war stop being produced.

[1] District to the West of Brussels, with a petit bourgeois population and large Turkish and Moroccan communities.

[2] Charles Michel heads a centre-right coalition, which was itself decided in the wake of the 24 Mai 2014 elections when the Socialist Party lost votes. It now finds itself out of the present coalition.

[3] The International Conference on Climate Change. It took place in Paris, but defenders of the earth organised critical demonstrations in all the big European capitals.

[4] Parti des Travailleurs Belges. It grew in recent years and has 2 MPs. The Socialist Party has 23 MPs and the Ecolos have 12. The total number of seats in the chamber is 150.