ON 18 OCTOBER 2020, LUIS ARCE OF THE M.A.S. (MOVEMENT FOR SOCIALISM IN BOLIVIA) WON THE PRESIDENTIAL ELECTIONS WITH 55% OF THE VOTE, AGAINST 29% FOR MESA, HIS NEAREST ANTAGONIST. ARCE’S ADMINISTRATION WINS ALSO A COMFORTABLE MAJORITY IN THE NATIONAL ASSEMBLY AND THE SENATE. CONSIDERING THE WORLD IMPERIALIST SUPPORT FOR THE COUP AGAINST EVO MORALES ONE YEAR AGO,  THIS ELECTORAL RESULT REPRESENTS A POPULAR AND ANTI-IMPERIALIST INSURRECTION.

One year ago, and following the 2019 autumn presidential elections that Evo Morales (of MAS) had won, once again, the results were suddenly cancelled and Morales was violently ejected from his office. False accusations of electoral irregularities had been published in the world’s press, followed by the murder of 30 Morales supporters and right-wing demonstrations in La Paz. MAS supporters were attacked and killed, included in their houses. The military closed parliament and Morales had to flee the country. When the population organised a large protest against this coup in November 2019, it was viciously put down by thugs, the police and soldiers.  In parliament meanwhile, from where the MAS MPs were now barred, senator Jeanine Añes (who had scored only 4% in the election) received the sash of presidency from the military. Through their continuing protests and partial victories, the mass of the population extracted from Añes the promise of elections that were eventually fixed for 18 October 2020.

This December 2020, reports have become public documenting 100 cases of police and military torture in the city of El Alto. From the time of last year’s coup till now, hundreds of thousands of protestors demanding their rights and new elections were tear-gassed, shot at, attacked by thugs, arrested and taken away by the police and the army. There are no official figures yet on the very high numbers of those who were arrested, tortured and killed.

The reader will find further below the article published by the Posadistas Hoy following the news of the coup in November last year.

Just after last year’s elections, the largely US-funded Organisation of American States told the world that the results were ‘fraudulent’. In the various capitalist administrations of the world, the view was that ‘regime change’ was needed in Bolivia to get rid of Evo Morales; it was also felt that the indigenous populations supporting president Morales were unduly empowered. As early as in 2006, Morales had introduced a Constitution setting out that the income from Bolivia’s national resources would be used, from now on, to end illiteracy, reduce poverty and improve the life and culture of all the population. This was never to the taste of the world’s multinationals and their political representatives in whose firm opinion, the natural resources of Bolivia like lithium, niobium and coltan are for their private corporations to exploit.

Evo Morales’s part-nationalisations, land reforms and expulsions of imperialism allowed him to reduce poverty from 64% in 2006 to 35% in 2017. He helped create of a universal health service alongside measures to protect ‘Mother Earth’ and combat climate change. He is wont to say, in his speeches, that “the capitalist system is at root of the problems of the world”.

In the run up to last year’s coup against Morales, the Trump administration had sent to Bolivia personnel from the US Agency for International Development along with his own legal advisers. Trump then accused Morales of “terrorism” and denied that Morales had just won the election. In several cities of Bolivia, right-wing groups and soldiers formed to attack and disband all pro-Morales gatherings. In a twitter comment of November 2019, Donald Trump described the overthrow of Morales as “a significant moment for democracy in the Western Hemisphere”.

The MAS wins the elections again:

This October 2020, the MAS candidate won with a 25% lead over right-wing Carlos Mesa. In this vote, the working class and peasant populations demonstrated their class consciousness and their heroic determination. They are not without having observed the entry of Iranian oil into the Venezuelan ports in the teeth of the US sanctions. They know that Russia and China are behind the world force that has allowed this event to take place.

With this vote, the people of Bolivia show the strength of their belief in justice and development. The world situation that gives them confidence is the same that gave the Mexican and Argentinian masses the organisation and the strength to elect governments that have shielded Evo Morales when he was forced into exile.

The vote for MAS this year, and in the teeth of brutal repression, is on a par with Argentina that legalises abortion in that extremely Catholic country.  Bolivia has a great history of anti-imperialist struggles to retain control over its sovereignty and natural resources.

The 2019 coup against Morales underlined again how the ‘few’ will not hand over the levers of wealth and power to ‘the many’.  They will fight instead, and to the finish if they can.

One conclusion for Britain is that the consolidation of a Labour-socialist left demands more organisation and more political preparation – along with the ability to foresee and mobilise the working class – superior to those which developed under the Corbyn leadership. It is not that the Corbyn project failed, but that his leadership was insufficiently prepared.

The world tide is turning again in favour of the left. Since 2018, this tide has given rise to governments more favourable to the working populations in Mexico and Argentina, as well as great struggles and achievements by the people in Chile. The dictatorship in Brazil has no strength of its own. It maintains itself only through the support of imperialism. In Ecuador meanwhile, the left is well placed again to win the February 2021 elections.

In spite of the repression that it suffers under the Starmer leadership, the Labour left has reasons to draw strength and courage from the anti-imperialist victories of the peoples in Latin America. This is made possible by the world balance of forces where imperialism shows itself exhausted and incapable in conditions where the mass of the populations base themselves on the audacious policies of China and Russia in support of many anti-imperialist struggles in the world.

POPULAR INSURRECTION IN BOLIVIA AGAINST THE CRIMINAL COUP OF IMPERIALISM

We must mobilize and reject this coup d’état orchestrated by imperialism with the complicity of the Bolivian right, Colombia, Brazil and the Macri government in Argentina.

This coup seeks to interrupt a revolutionary process, as in Bolivia, with a great authority throughout Latin America; and one of the most important supporters of the Venezuelan government.

Evo Morales won the first round (2019) by more than ten points in advance of his rival Carlos Mesa, who cried ‘fraud’ even before the results were out. Instead of defusing the situation, the Organisation of American States (OAS) cited irregularities in this first round, in 0.22% of the results. Then and without any basis, they called for a second electoral round.

But there was no time to reach an agreement because the right-wing Civic Committees, especially in Santa Cruz, led by Luis F. Camacho and paramilitary gangs and mercenaries, set-out to intimidate the population with wanton acts of violence, persecution, arson and assassinations.

Through the measures they had taken to date, the governments of Evo Morales and Álvaro García Linera had recovered the wealth of Bolivia, placing it at the service of the Bolivian masses.

Hydrocarbons had been nationalised back in May 2006. This had raised the State’s revenue and allowed for the stabilisation of growth at an average of 4.9% in recent years. The minimum wage went up from $ 55 to $ 308; moderate and extreme poverty fell and the latest survey record unemployment at 4.2%. Investment in education and health grew and, in 2008, the territory of Bolivia was declared free of illiteracy. The external debt decreased and important public works were built, among them the Cable Car that connects La Paz with El Alto.

What are the economic and political interests behind this US-led coup? In the first place, Bolivia has the world’s largest reserve of lithium, a product necessary in the working of glass and ceramics, as well as for the batteries of electric cars. Bolivia is also a large producer of gas.  It has important mineral deposits which the left-wing government prepares for recovery.

From the political point of view, the Revolutionary State of Bolivia plays a very important role as it works with other countries in ALBA* (the Bolivarian Alternative for Latin America and the Caribbean), created in Venezuela in 2011 for the purpose of acting together in the fight against poverty and social exclusion. This organisation has denounced the coup against Evo Morales. It will act to reverse this coup, within possibilities.

The provisional government that followed the coup gets its support from Colombia, from Trump, Bolsonaro in Brazil and the European Union that pretends there has been no coup. Immediate measures: withdraw from ALBA, dismiss 80% of the ambassadors, categorise the left as seditious, send back to Cuba their 725 cooperation officials. Not really substantive measures, however.  The journalists who denounce the situation are attacked, and forced to leave the country if foreigners. No one must witness the repression and the persecution of the people. 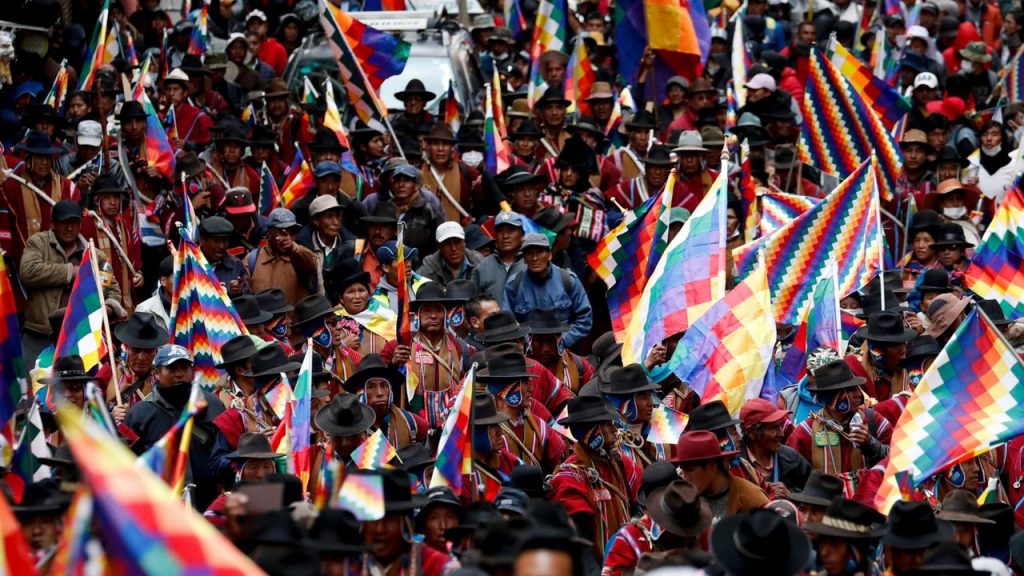 Mass mobilisations against the coup in November 2019

Outraged by these events, the response of the masses  has not been long in coming. A massive council in El Alto has rejected this coup. It has demanded the reinstatement of Evo Morales. It is now organising a march on La Paz. The miners are mobilised and sectors of the labor movement go to the capital. The COB (Central Obrera Boliviana) has announced a General Strike. The cocalero movement (coca leaf growers) is on the warpath and Potosí (the name of the area) rises up against the provisional government.

At this point in time, there is no clear right-wing interlocutor to speak on behalf of the country. There is a power vacuum. The only sector that remains faithful to the right is the police because the Armed Forces are divided. This provisional government has appointed a new commander-in-chief because it didn’t trust the previous one.

As the days go by, the only certainty is the mobilisation of the masses and the lack of social support for this government.

There have already been demonstrations of solidarity and against the coup in Latin America and some European cities. Governments have lent strong support, as those in Mexico, Venezuela, Cuba and Argentina. The president-elect of Argentina, Alberto Fernández, was the one who organised the evacuation of Evo Morales and García Linera to Mexico, overcoming the closure of airspaces. Such has been the response of the progressive governments in the region as they realise they are all under threat.

The left-wing political parties, the trade unions and the social movements are set to continue and extend their actions. They speak out, they don’t accept the way the popular will expressed in the cancelled elections has been usurped. They denounce the indiscriminate repression befalling them. No amount of crime and murder from police and army is going to stop their determination to defend the conquest that the Revolutionary State means to them.

* ALBA members are Antigua, Barbuda, Bolivia, Cuba, Dominica, Grenada, Nicaragua, St. Kits and Nevis, St. Lucia, St. Vincent and the Grenadines, Venezuela, Suriname. ALBA created the new money, the SUCRE to trade between them without incurring the charges inherent to the use of the dollar. 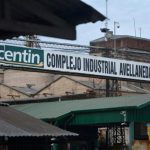