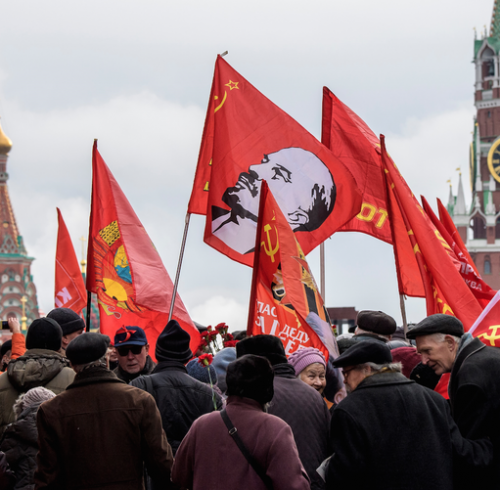 WE SALUTE THE SOVIET PEOPLE WITH ALL OUR FORCES. WE SALUTE ITS PROWESS IN OCTOBER 1917,  and the creation of the first Workers State in history. We salute the heroic defence of the USSR and its victory over the Nazi invasion. We salute it too for having sustained the function of the Soviet Union in the world, as long as it could.

The USSR contributed to the reinforcement of the world’s working class all the way up to when it imploded in 1991.

It is thanks to the USSR that the masses of the big capitalist countries won rights beyond their imaginings. Large Communist parties and trade union centres were build thanks to it. The colonial liberation movements acquired an anti-imperialist and socialist character, and new Workers States appeared on every continent.

The experience of 1917 and the Ten Days that Shook the World marked the Soviet people for ever. They gave it confidence, resolve and revolutionary consciousness. Capitalist crisis had been precipitated by the fight between the big capitalist powers for a new repartition of markets. Crisis was in all the countries, and common to them all was the growing misery and hunger of the soldiers, of the workers and of the peasants.

In Russia, the Bolshevik Party of Lenin and Trotsky made all the difference:

The scientific discipline of the Bolshevik Party allowed it to profit from the weakness of Czarist power and of world capitalism. The Party’s simple and audacious program of Bread Peace and Land bound soldiers and sailors incensed by their slaughter, together with the starving peasants and the workers of the industrial cities. The Party broke from a Social Democracy that yielded and negotiated with bourgeois power in the hope to make it change and drop capitalist exploitation.

On this anniversary, we render the greatest homage to the Bolshevik Party, to Lenin, to Trotsky, the Soviets and the Red Army. The triumph of the revolution was made possible by the decisive participation of the masses in the Soviets, and by the role of the Red Army as the guarantor of working class power.

In its first seven years, the Russian Revolution created the most advanced democratic functioning ever seen in human history:

The revolution faced the difficulties posed by the economic and social backwardness of Russia plus those posed by Socialist transformation. The working class was having to demonstrate that it could lead a State. It was having to win a civil war, and an international war, and still find a way to feed a suffering and famished people. The first seven years of the USSR are etched in the memory of the Soviet people. This is so in spite of the retreats that happened later on, in spite of Stalinism itself.

Imperialism isolated the USSR whilst other revolutions failed in other countries. In the USSR, this stimulated the rise of conservative and bureaucratic layers. They grabbed hold of political power and eliminated most of the Bolsheviks who had made the Revolution. Headed by Stalin, they decided on  ‘Socialism in one country’ and  conciliation with capitalism. This isolated the USSR from the  revolutionary movements of the world and left it unprepared for the brutal Nazi invasion that followed.

The Soviet masses managed to reverse this situation. In Stalingrad (1942-43), the best of the working class, all the remaining old Bolsheviks and all the old officials of the Red Army – whose leaderships had been decapitated by Stalin – resisted furiously and defeated Hitler’s army. The human loss was tremendous, but the people of Russia and of all the nationalities that formed the Soviet Union reasserted the leading role of the USSR in the world.

In 1991, the partial dismantlement of the Soviet Union – with all its debilitating internal and international consequences – did not manage to break the conscious connection between the Soviet people and its Revolution. The latter closed ranks as they had done in 1942 at Stalingrad. The best of the Communists, of the Armed Forces, of the workers and of the intellectuals managed to reinstate the world revolutionary role of the country of Lenin, Trotsky and the Bolsheviks.

Thinking that the dismantlement of the USSR had destroyed that country, and that the End of History had arrived(*),  the world capitalist system stimulated the plunder of the USSR by the bureaucratic groups who had grabbed the economic structures of the Soviet Workers State. The masses lost all their rights; their conditions of life and work were trashed, but capitalism could not incorporate Russia in its capitalist functioning.

Popular resistance and an important part of the Armed Forces [in what was the USSR] force a selection in the bureaucracy by opposing their most predatory sectors. The latter very nearly offered the main resources of the USSR to capitalism. The Putin group, which leads this selection, has come to understand that its existence and  future depend on adopting anti-imperialist policies. Neither Obama nor Trump ever looked favourably on the repeated Russian offers of negotiation; not even when Russia offered to join the United States in the so-called “War on Terror”. Nowadays, Putin does not depend on the decisions of these ‘counterparts’ …

In only a few years, Russia recovered its central role in the world . Now it makes new relations and accords of cooperation with countries attacked by imperialism or marginalised on the world market. Russia creates economic, political and military alliances with China, Cuba and Venezuela. In the Middle East, it supports the countries engaged in the fight against the terrorism sponsored by Saoudi Arabia and the Nato countries. All this creates force-relations favourable to the revolutionary process. Russia rebuilds a military capacity appropriate to the Nato threat.

The recent visit of Putin to Iran and his meeting with Ali Khamenei send to the world the message that Russia is ready to confront imperialism, with all the consequences. Thanks to Russia, Iran develops its own independent energetic policy, and the Pasdaran (the Iranian Guardians of the Revolution) put to effective use the missiles which they captured from IS (Daesh) in Syria.

Russia is forced to adopt a world anti-imperialist policy:

Although the Russian State has regained control over an important part of its economy, capitalist relations predominate in Russia. These relations deepen the inequalities in the distribution of the country’s wealth. However, the world role played by Russia grows more anti-imperialist. Its foreign policy does not tend to sharpen competition and private interchange. It tends instead to rally the country behind the struggle against imperial arrogance. The role of the State grows in the economy and society, along with that of popular sectors – workers, scientists and soldiers – stimulated to play a greater role in society. Forthcoming internal conflicts and deep changes are likely to be solved in favour of the masses of the world and the anti-imperialist struggle. This is the form that the Permanent Revolution takes in this stage.

The masses of the world understand these differences. The Russian magnates are not the legitimate representatives of present-day Russia. Russia has legitimacy through a people and Armed Forces proud of their revolutionary past, and keen to retrieve it. It has legitimacy through Putin’s world policy of solidarity and anti-imperialism. The present Russian leaders, and Putin himself, attended the Victory Day and Immortal Regiment celebrations. The weapons of Russia and of the United States do not mean the same thing.  As in USSR and cold-war times, the Russian weapons mean progress and the Yankee’s weapons mean destruction, pillage, domination.

The decision of the Russian Communist Party to celebrate the Centenary of the Great October Revolution is very important, particularly since it came with a call to convene an international meeting of the communist and revolutionary parties of the world. The process leads to the final settlement of accounts between capitalism and Socialism. Important steps are being taken towards the world coordination of the struggle. The idea grows that the destiny of any country is tied to the outcome of the anti-imperialist struggle in the world.

Another example is Venezuela:

In Venezuela, the celebrations for the centenary of the Russian Revolution were not only official, but Nicolas Maduro took part in them in person, granting these celebrations as he said, “the dignity” which they deserve.

There is no perspective ahead for any ‘national’ or ‘independentist’ outcome. All the States that detached themselves from the USSR, or from Yugoslavia, now follow the orders of the European Commission and European Central Bank. They must accept the NATO bases on their territories and increase their military expenditures.

The Russian people want to retake their vanguard role. They want to rebuild the Workers State and support the world anti-capitalist struggle. The Russian Revolution was not any “mistake” ! To the contrary, it confirmed what our Marxist masters[1] analysed and foresaw: Capitalism can be defeated. The working class can rid humanity of every type of capitalist domination and exploitation, and abolish private property.

The feature image depicts the 2017 Centenary celebration of the Russian Revolution in Moscow.