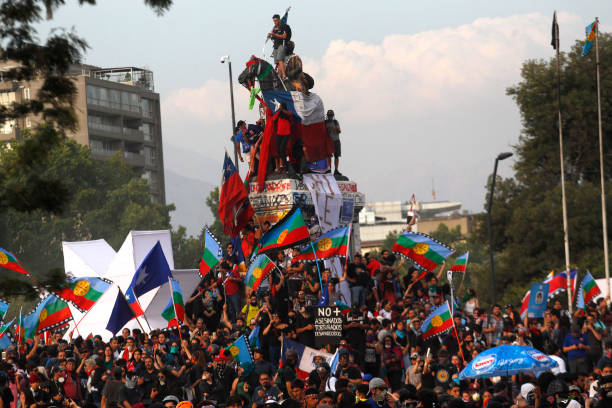 In the presidential elections of December 2021 in Chile, the advance of the Left Front “Apruebo Dignidad”[1] is a historic victory full of significance on a one hand, and of difficulties on the other. The winner Gabriel Boric is only to take charge next March, but his government is already formed. It is an innovative government through its great number of women and the attention it pays to the articulations between those composing the Front, who took him to the leadership of the country. Boric won 1,200,000 votes in the second round. His basic message is that, whoever the ministers and secretaries are to be, they are now part of the social mobilization that started in 2019. That was when the people had taken to the streets to the cry of: “it’s not 30 pesos but 30 years…”[2], to turn the page on the historic chapter the Right-wing military had opened in blood, in alliance with the imperialism of the United States, on 11 September 1973.

The social leaders and the Communists played a central role in Boric’s victory:

This popular Chile incorporates itself fully in the process of transformation embracing the whole of Latin America. In this, it is reinforced by the very rich history of the country, when Communists and Socialists, along with the revolutionary left, wrote one of the most important chapters in the experience of socialist construction on this continent.

In 1973 and in tandem with the Chilean oligarchy, US imperialism had decided to resort to one of the most ferocious dictatorships in order to impose itself. Then came the Piñera government (billionaire Pinera governed 2010-2014 and 2018-2022) to perpetuate the Pinochetist legacy in the manner of the carabinieri who can shoot at eye level with impunity. In this election, Pinochetism was still alive in Boric’s opponent, the nostalgic Jose Antonio Kast, an avowed Nazi, who garnered around 40% of the vote through terrorist media campaigns with influence in backward and distant sectors of the population.

The traditional grip of the Chilean oligarchy is described by Isabel Allende and other famous writers: a thoroughly parasitic, aristocratic and corrupt force. But Chile is alive as a country. It is dynamic and committed to production and progress. This is the Chile that voted left. There was a moment of hesitation, of doubt, in the first round. There was a certain distrust of the outcome of the primaries. This distrust came from the same movements that had been criticised during the constitutional struggles and mass mobilisations.

With the members of the Constitutional Assembly elected (on 16.5.2021) the population finds itself engaged in building an inclusive social process where it can venture critiques to the historic socialist and communist parties. That same population now develops new leaderships, like those about to write the foundational text (Constitution) for a new, plurinational, democratic and popular Chile.

In the second round of the presidential election, many social leaders – Communists especially – campaigned strongly in the big cities and in the remotest parts. This invited people to get involved, to help get rid of the reactionary Right-wing and its pretensions. In these past few years, unfortunately, many of the hopes of the masses were ignored by the Socialists and the Communists. The Bachelet governments (2006-10 and 2014-18) and Progressive Convergence (Social-Democratic Centre-Left) brought great disappointments to the labour and popular movements, feeding mistrust towards a sector of the political leadership.

In the main cities, Santiago in particular, huge youth and student rebellions struck hard at the reactionary Piñera government. In the last two years, a new political leadership formed on the barricades, in the streets, the places of study and the workplaces, against the criminal repression of the army and the carabinieri. The repression has affected the indigenous people too, Mapuche and others[3]. The battle in their various historic communities has not only fortified a greater unity and resilience between them, but impelled a fusion between the struggles in the cities and the countryside. This helped to shape the strong social concern that prevails in the Convention.

The President of the constituent assembly is a leader representative of the Mapuche people[4]. The Convention is now making great strides forward. It retakes the Salvador Allende’s nationalisation program of the natural resources, like that of copper and lithium. The leaders who promote these measures are on the receiving end of persecution and threats, as is happening to Ivanna Olivares and Manuela Royo[5].

Before this general election, the left had already made gains in local and municipal elections (May 2021). Throughout the country, people used mayoral and governorship elections to build dual power forms capable of challenging capitalist control. Experiences of citizen participation returned like those under the popular government of Salvador Allende. In the municipal elections, important left advances had been achieved in cities – like Santiago now governed by a communist mayor.

In this general election, an old electoral quandary has ended. Always constricted and subjugated by the Centre-Left (to which the Frente Amplio belongs), the electoral forces of the left could never express themselves autonomously. For many years, there never were more than two electoral poles to choose from: Centre-left or Right-wing.

These past 50 years, the multinationals, the Chilean financial oligarchy and exporting bourgeoisie had a jolly good time building their fortunes on the back of Chile. This election deals them a tremendous blow. Biden waited several days before contacting Boric to congratulate him on his victory. The US imperialists cannot believe that their castle in Chile might crumble. If Pinochet laid this castle’s first brick, the finishing touches came from US Secretary Kissinger. For them, Chile was the social laboratory to showcase the neoliberal monetarist theory of Milton Friedman and the Chicago boys: meaning the total privatisation of the natural resources, from copper to oil, from iron to coal, from fishing to salt, from essential services like education to research and to health. The Pinochetist constitution ‘decreed’ this reactionary transformation, where only the private company has the right, and where the role of the State is to guarantee and to promote it.

The Right-wing is not going to take kindly to neoliberalism more fully compromised. I has already thrown a few obstacles in the way of the Constituent Assembly. At first, it said that the Convention can make modifications to everything “except to the international commitments of the country” – i.e., do not touch at the relations with the multinationals and the World Bank. Now it insists on two-third majorities to get the Constitutional reforms approved.

Social leaders and Communists discuss openly the idea of the new government lessening its operations from the parliamentary buildings in Santiago, in favour of winning authority in daily relations with society, in the labour movement and the rest of the masses. This re-starts a discussion that the 1973 State coup had interrupted regarding Government or Power.  Indeed, what is it that Boric and his team are going to manage for real? Are the formal democratic institutions going to be enough to block the right-wing, and meet the urgent needs of the masses? The mask of “modernity” behind which Chile has hidden all these years is actually covering the face of the most unequal country in Latin America.

The Allende government, a world experience that cannot be repeated

Allende’s Popular Unity government had been a social laboratory too. Through it, an attempt at honest reformist transformation had been experimented upon, with a left socialist leadership supported by the Chilean Communist Party. They had won the solidarity and the attention of the communist and socialist parties around the world, along with the ‘socialist countries’ (Workers States) like Cuba, the USSR, the GDR. Since that time however, the Chilean masses and the broad Chilean vanguard have gone on maturing. Daily class struggle and a revolutionary consciousness have been warning them about the bourgeoisie no longer banking on the result of future elections – preparing to sabotage the popular government instead, hard working for the revenge of the ruling classes.

The Posadist Fourth International, J. Posadas himself, intervened directly in this matter by preparing our Chilean cadres with delegations from Latin American sections who took part in trade union, social and governmental missions. It was an experience of great theoretical and political elaboration, with a program and a persuasive tactic. It was directed towards the Allende political leadership which wanted to face up, but was relying on bourgeois institutions in order to do so.

Allende believed that he could stop, before it could strike, the power of the big bourgeoisie concentrating in the army. Allende’s government tried to operate last minute shifts in the military, but to no avail. Inside and outside the institutions, the CIA-backed Right-wing had long ago groomed the criminals who broke onto the scene in 1973.

This is why J. Posadas and the International, together with the world revolutionary movement, paid tribute to Salvador Allende and to the thousands killed and tortured – like our comrade Nelsa Gadea Galan[6] who was kidnapped in the first days of the murderous coup. This outcome in Chile had repercussions around the world, especially in the communist movement and in Europe.

The European communist parties retreated into Eurocommunism, a national vision far removed from the revolutionary and class principles. At the same time there came a separation between them and the communist parties in the Workers States. In only a few years, the resulting internal divide was exploited by the imperialist reaction, striking hard at the working class and its conquests, dismantling the communist movement.

In a few days’ time (in March), the popular government of Boric is going to take office. One must expect a rise in the social struggles. While the Constitution is being drafted, there are petitions, popular mobilizations and social proposals being made. The Right-wing media has unleashed a campaign of persecution and of threats against the popular leaders and activists. The success of this process in Chile is not guaranteed, but the Right-wing will not be able to repeat 1973. In this, the continental and world contexts are going to be important.

[1] Apruebo Dignidad is a left coalition. It was set up on 11 Jan 2021 in preparation for the election of the members of the Constitutional Assembly that took place on 16 May 2021. This coalition is formed of The Broad Front (Frente Amplio) and Chile Digno, where Boric comes from. Apruebo now includes Mesa de Unidad Social, Comunidad por la Dignidad, Verde y Soberaro, The Communist Party, the Federacion Regionalista Verde Soclal, el Partido Igualdad, Accion Humanista, Izquierda Libertaria, Izquierda Christiana, as well as Feminist organisations and others.

[2] “30 pesos” was the amount of the fare rise on public transport (Oct 2019) that provoked massive anger and fare dodging operations. “30 years” refers to the three decades in the rise and rise of post-Pinochet neoliberalism.

[3] In the vote for the Constitutional Assembly (or Convention) which has 155 seats, the Indigenous people won 17 seats reserved to Mapuche , Aymara, Diaguita, Lickanantay, Colla, Quechua, Rapa Nui, Chango, Kawesgar, Yagan.

[4] Maria Elisa Quinteros Caceres. A Mapuche born in Talca.  The name Talca comes from the word ‘tralka’ meaning ‘thunder’. She was nominated for President of the Constituent Assembly on 5.1.22 after a fierce struggle and 9 rounds of voting.  Her huge social support allowed her to be elected and confirmed as President of the Assembly.

[5] Manuela Royo was elected Human Rights Coordinator for the Convention. Ivana Olivares, like Manuela, is a fighter for the Right to Water and the Environment. Water is privately owned in Chile. Through their massive Mapuche and popular support, these women won District 23 and 5 respectively. They receive mortal threats. 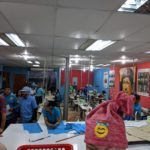 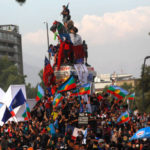