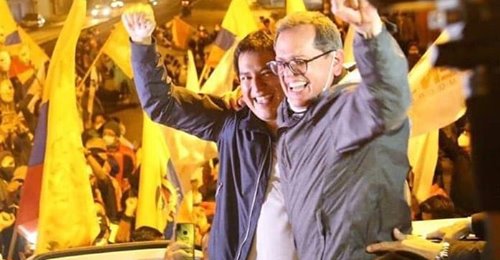 IN THIS FIRST ROUND OF THE PRESIDENTIAL ELECTIONS, THE LEFT DUO ARAUZ-RABASCALL (MOVIMIENTO REVOLUCIÓN CIUDADANA) OF RAFAEL CORREA WON WITH 32.5% – IN KEEPING WITH THE RECENT LEFT-WING ELECTORAL VICTORIES IN VENEZUELA AND BOLIVIA. THIS REINFORCES THE REVOLUTIONARY STATES[1] IN THEIR OBJECTIVES FOR LATIN AMERICAN INTEGRATION AND THE “SOCIALISM OF THE 21ST CENTURY”.

Those who expressed themselves with force in this first round of elections are the indigenous peoples through the Pachakutik movement and several other ecological and feminist lists. All together, these organisations won almost 60% of the vote.

The right-wing won less than 25% with its banker candidate Guillermo Lasso and the miserable Lenin Moreno (former running mate & minister of Rafael Correa and perpetrator of the coup that hunted Correa out presidency and country). A trouncing that was, all along the line! But a great challenge too for Andrés Arauz, the Ecuadorian left and the leaders of the indigenous movement. Right now, a leadership is needed prepared to raise the socialist profile of the Revolutionary State, to propose radical and socialist measures. A united and revolutionary determination will be needed for the left in the second round  (11th April).

In spite of immense difficulties, “Correism” has shown its enormous potential. It has a strong electorate supported by the working class, the petit bourgeoisie, peasant and indigenous sectors. It is all these people who have just voted for the Movement of the Citizens’ Revolution. They did so in spite of the engulfing poverty and neoliberal policies imposed by the Moreno government; in spite of the persecutions and attacks their leaders suffered, that never stopped, some still in prison, others having had to find refuge in embassies or abroad. In spite of all the political blows aimed its leaders, the movement kept to its decision to participate in the elections. This is what earned them a great popular support.

The persecutions and legal proceedings against Rafael Correa and his movement

The political weaponisation of justice (lawfare) as applied in Ecuador is completely stupid. It has been copied from other Latin American countries and programmed and directed by the United States government. But all the trials and accusations against Left leaders collapsed, one after the other, whilst the progressive and revolutionary forces of Latin America are gaining in strength.

The left leaders of the Movement have been much weakened by these heavy persecutions and repressions. This hampered them and stopped them from using all their electoral forces. They know about this, they recognise it themselves. They were very disappointed and discouraged about not having won this first round outright.

The [bias] Electoral Council is still trying to attack with the help of the candidates who came second, Lasso and Yaka. But it was without any legal justification that this Council ordered half the votes to be recounted in 6 regions, and all the votes to be recounted in the Guayaquil region. And it did not allow other parties to monitor this recount. As happened in Bolivia with Evo Morales in 2019, conditions are being sought to cancel the second round. To steal the victory from Arauz. The Colombian judiciary plays its part with stories of ELN[2] guerrillas financing Arauz.

The weakness of the Citizen Revolution Movement is due to the way it is repressed and persecuted; but it is due also to its limitations as a political leadership, including its 10 years of participation in power (2007-2017). There are big debates about this in the movement. It used to be political practice, in the past, to drive the revolution forward top-down from the government, no account taken of the social and popular organisations already in existence or in need to be created.

What is missing is the political party of the revolution. A party grounded in the deep social and popular experience, ready to open the great national debate about how to break free from dependence on oil, mineral, and natural resources. The need to remodel the country’s industry and production. The need not only to implement the reforms and Agrarian Revolution as laid out in the Constitution, but to be based also on the central role of the State and a vast process of Caribbean and Latin American cooperation.

The abandonment of these major aspirations [particularly since 2017 with ‘Correist’ Moreno] disappointed many activists and caused dispersion in the present elections. Many of the small leftist lists contain activists who accompanied “Correism” or had collaborated in the first government of Rafael Correa. But some like the environmentalists had later moved away, when an abrupt change of policy had followed the sharp fall in oil-prices; when oil wells were allowed to open in the Yasuni National Park and concessions were granted to mining companies. There were also clashes with the feminist movement when the right to abortion (already very reduced) was denied and the government drew closer to religious authorities. There were clashes in the trade unions too, leading to a split in them and the formation of a trade union centre which ended up siding with Moreno.

A most important event occurred in October 2019 when the indigenous movement took the lead in the rebellion against the Moreno government. That government was getting ready to implement an IMF-imposed program of price rises on fuel and main services. Deep cuts were coming-in against wages and pensions. As they marched massively on Quito, the indigenous and peasant population drew the working class and unorganised sectors behind them into the city. Many leaders of the Corréist movement went to put themselves at the head of the urban revolt, and despite savage repression, the Moreno government was made to concede and negotiate.

The legacy of the Moreno government is insufferable. Add to this its catastrophic handling of the pandemic which turned Ecuador into one of the world’s most impacted countries. The pandemic served this government to camouflage its policy of dependence on imperialism, on agribusiness, on the multinationals. The Ecuadorian people could not respond to the full whilst the government was activating its plan to privatise a large part of the oil refineries, the major power plants and telecommunications. The incoming government is going to have to keep these sectors under state control at all costs, failing the which no other future programming will be possible in Ecuador. The next government will also have to renegotiate the debt and decide when and how to repay. Arauz has offered to initiate, upon taking office, an emergency package of $ 1,000 to each of the one million families – and it is important to do so. It is going to be necessary to tax the large fortunes, retrieve the funds from the tax havens and those from offshore investments.

More links with Cuba and Venezuela:

With this electoral process, the conditions are rising for a great anti-imperialist advance and socialist measures. The Latin American left, the Progressive International, the Forum of Sao Paulo and Porto Alegre, must coordinate, build bridges with the European left, promote advanced measures of popular participation, integration and planning. We must immediately establish a mutual aid program in the face of the pandemic, build a Latin American health system, a bank for the production and mass distribution of coronavirus drugs and vaccines.

Links with Cuba and Venezuela must be established and strengthened. The Cuban Workers’ State has demonstrated the effectiveness of social and scientific organisation in the face of the pandemic, its capacity to organise internationalist assistance, to produce drugs and vaccines for the entire population of Cuba and other countries and continents. An alternative and progressive global vision is emerging. This vision can count on Cuba’s internationalist scientific experience. We must also revive the Latin American solidarity coordination, ALBA, UNASUR, create a Latin American vaccine bank in order to counter the speculations of multinationals.

The electoral second round meant for 11 April is called into question by the manoeuvres of the Ecuadorian right. Arauz must resolutely commit to building a front of all the militant social forces, even those who supported other candidates in the first round, the working class, indigenous peoples, young people, environmentalists, feminists. He must speak out clearly for a radical social transformation of the country and its union with all of Latin America.

[1] On the Revolutionary State, read by J Posadas: – http://quatrieme-internationale-posadiste.org/book_pdf/EN/1_THE%20REVOLUTIONARY%20STAT-4_PRINT.pdf