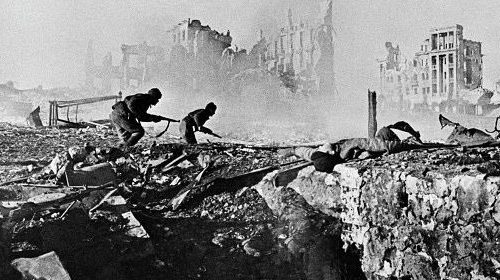 On 19 September 2019, the European Parliament passed a resolution “On the importance of European Remembrance for the future of Europe” (Ref. 2019/2819 (RSP)). This resolution affirms counter-truths that we believe important to analyse and refute.

Notes to the reader: Here, ‘Union’ will mean the European Union (or EU) – and ‘EP’ will mean European Parliament. The featured picture is the battle of Stalingrad, 1943. Text of the EU resolution: https://www.europarl.europa.eu/doceo/document/B-9-2019-0100_EN.html  –

The resolution states, among other things, that:

World War II did not start as the immediate result of the Nazi-Soviet Treaty:

We reject with all our communist indignation these provocative accusations which exonerates world capitalism of any direct responsibility in the outbreak of the Second World War.  The Second World War has not been “the immediate result of the notorious Nazi-Soviet Treaty on (sic) Non-Aggression of 23 August 1939”. Previous to that, there had been the Anti-Comintern Pact between Japan and Germany on 25 November 1936, a pact later joined by Spain and Italy, that called itself publicly and proudly “fascist and anti-Communist”. There had also been the Munich Agreement signed on 30 September 1938 between Germany, Britain, France and Italy; it forced Czechoslovakia to surrender the Sudetenlands to Nazi Germany, as the latter was already known as ‘the Third Reich’. On the same day of 1938, the Anglo-German agreement signed by Chamberlain and Hitler inaugurated the ‘appeasement policy’ of the so-called democratic capitalist countries towards Hitler.

The EU resolution tries to rehabilitate the Nazi collaborators:

This EU resolution emanates from the far-right sectors in capitalism whose intention is to stigmatise Communism and effectively rehabilitate the Nazi collaborators. This is why it makes no mention of the policy of capitulation of the Marshal Pétain’s government in France and its collaboration with the Nazis. The Armistice was signed on 22 June 1940 under draconian conditions: half of France occupied, all war prisoners sent to Germany, all weapons and military installations surrendered, the entire fleet disarmed. Petain’s “New Order” granted him full powers by decree on the idealised basis of God, Family, Fatherland and Work. All opposition is repressed. The Communists, Gaullists, freemasons, anarchists, etc. were called “terrorists”. Jews were identified, arrested and crammed into concentration camps; and with the active help of the French police and Gestapo, the Nazis’ “final solution” got under way. Between 1939 and 1945, more than 600,000 persons (Communists, Jews, foreigners) were interned in French camps.

The Soviet Union had no need ‘to take over the world’:

In the resolution, it is a lie to describe the 1939 Soviet invasion of Poland and Finland as an aggression. It was part of the legitimate and historic struggle of the socially superior regime of the Soviet Workers State to crush the deadly Nazi regime, to try and shield itself from the war of that regime. The Soviet Union never occupied Finland; and its intervention in Poland laid the political foundations for State-control to become established over Poland’s industries and a third of its territory previously expropriated by the Nazis and their collaborators. The Soviet Union inaugurated a new form of social organisation that has no need to “take over the world”. The voluntary union of its 15 republics proved the point.

The resolution uses formal analogies such as the Soviet ‘invasion’ of the Republic of Poland (two weeks after Hitler’s invasion of Poland) to put Nazism and the regime of the Soviet Union on the same level. Hence the resolution makes no mention of the working-class and revolutionary forces, in Poland and in the other Eastern European countries, who helped to defeat the Nazis. It does not even mention the heroic resistance of the Soviet masses during the Battle of Stalingrad from July 1942 to February 1943, which left more than a million Soviet people dead, and marked the start of the victorious war turn against Nazism.

Is the neo-liberal ideology of the capitalist countries ‘democratic’?

The EU resolution says that “it rises with one voice against any totalitarian regime” – but what about the EU neoliberal ideology that supports concentration camps like the one at Guantanamo, and takes part in all the invasions and bombings in Afghanistan, Iraq, Syria and many other countries? What about France and assorted so-called European ‘democratic countries’ who still have to ratify the TPNW (UNTC) [1], whilst they modernise their nuclear arsenal on this 75th anniversary of the dropping of the atomic bomb on Hiroshima and Nagasaki?

Nazism is not the only ideology that has used the pretext of race to justify its crimes. The list is long of the mass assassinations, genocides and deportations committed by the capitalist countries on the basis of ideas such as social Darwinism, the inferiority of the populations of Africa, Asia and Latin America, or the indigenous peoples of the world. All of this continues to take place besides, in this present era of imperialism, and in the name of “democracy”.

The Workers State is superior to the capitalist regime:

The resolution declares that the post 1945 countries of Central and Eastern Europe “that came under the occupation or the direct influence of the Soviet Union were deprived of freedom, sovereignty, dignity, fundamental rights and socio-economic development”. But the truth is the pole opposite: the vast majority of these countries – Russia included – came out from under their feudal or semi-feudal regimes. They developed, and they became industrialised with a very high level of education and culture, with social security for all, strong working-class rights and a level of woman’s emancipation unknown in the capitalist countries.

For the countries of Central and Eastern Europe, adhesion to the EU and NATO is far from representing any “European family of free democratic countries”. In 2019, the charitable association called ‘Social Watch’ informed as follows on the situation in the countries of Central Europe and the Commonwealth of Independent States (CIS): “since 1995 access to health services and access to social support have deteriorated, which has led to a substantial increase in poverty”. The resolution does not condemn any of the acts of genocide and totalitarianism perpetrated by the United States and NATO themselves, in the recent decades; nor does it mention the hundreds of thousands of innocent people murdered in the bombings, the invasions and the other supposedly ‘humanitarian’ actions of capitalism.

The anti-communist thrust of this resolution reveals the growing fear of the multinationals and the upper layers of finance capital that Communism is going to spread again, what with all the social inequality of capitalism, the incompetence, the increasing poverty and the advance to war. After desperately pulling their hair out, the capitalists found no better than this kind of attack which smears Communism by calling it Nazism.

The European United Left/Nordic Green Left in the European Parliament voted against this resolution. But the vast majority of the social democratic parties and all the right and centre-right parties voted in favour; in so doing, they showed their great fear of the working class and of Communism. It is this fear that makes them turn to the far-right and endorse this revisionism. They use notions like Stalin=Nazism to justify their world policy of military confrontation with Russia and its anti-capitalist allies.

[1] The Treaty for the Prohibition of Nuclear Weapons TPNW (UNTC) is now ratified by 84 countries, with 44 more wishing to do so. The signing of this Treaty is firmly opposed by the ‘democratic countries’ of the USA and NATO. https://treaties.un.org/pages/ViewDetails.aspx?src=TREATY&mtdsg_no=XXVI-9&chapter=26&clang=_en

On the day of the commemoration of the Victory this year in Red Square* and in front of 15,000 Red Army soldiers (due on 9 May but postponed to 24 June due to the pandemic), Vladimir Putin sent strong messages where he highlighted the importance of an anti-fascist alliance: “Only together can we protect the world from new and dangerous threats”.

He recognized the role of the Red Army and of the Soviet people in the war against Nazi-fascism: The Soviet people were the ones who gave the most lives: 27 million of them, including 7.5 million Red Army soldiers who fought in the battles of Moscow, Stalingrad, Kursk and up until the liberation in Berlin (1945).

When he said that it was essential to “protect and defend the truth” about the facts of the war, Putin added: “It is impossible to imagine what would have happened in the world if the Red Army had not come to its defence”. “The Soviet people ended the Holocaust and saved the world from fascism!” and “After having defended their own land, the Soviet soldiers freed the European states from the invaders, they put an end to the terrible tragedy of the Holocaust, and they saved the people of Germany.

With this act in Red Square, Russia sent notice to the world, to the USA and to the forces of NATO: Russia has deep historical roots in the former USSR. It is determined and capable of stopping further Nazi-fascist war incursions [even if] sustained by many of the European Parliament signatories to this resolution.

* Victory Day commemorates the defeat and surrender of the Nazis in 1945. The commemoration this year was the 75th anniversary of the Nazis’ capitulation. About 3.6 million Muscovites watched the live parade in Moscow’s Red Square on TV.