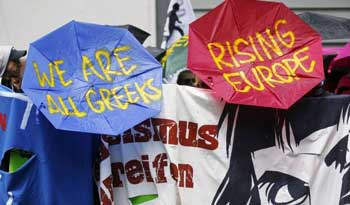 Greece has been paramount in the world process, and still is.

The Greek masses intervene against dispossession and the liquidation of their social assets, despite a weak leadership and a lack of prepared cadres. In an ingenuous (gullible) throw of the dice, a sector of Syriza looked for a less punishing agreement from the European Union (EU). Because this Syriza sector was not prepared to advance more, it gave itself up to the electoral perspective. But the idea of the European capitalists is to grind the Greek State right down into the ground; their bailout does not rescue Greece at all. It only services the debt and feeds the banks. There may be €32 billion left for social expenditure, but the Greek patrimony is being ransacked through privatisations and spoliations. 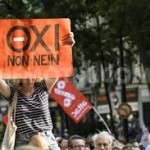 When Syriza looked for accords with Russia and the BRICS[1], the United States put a stop to this with great pressures and hints of a military coup. The Greek population rejected this criminal capitalist policy, headed by Germany, and registered its strong opposition by voting No (Oxi) in the referendum[2]. The Syriza sector behind Tsipras thought to impress or blackmail the EU leaders with this result. The sector around Varoufakis and others more to the Left proposed to seek popular support in a parallel functioning with more transparency and democracy.

Greece is central to the breakup of the European right

Greece is rich in experiences of Left fronts. And it is with popular participation that its Thessaloniki programme took a clear anti-capitalist orientation[3]. In the beginning, Tsipras wanted to link the struggle in Greece with the struggle internationally, with the European Left and with the revolutionary process in Latin America. None of these experiences should be treated as lost, for they belong to the masses of the world. They figure in the patrimony of the masses of the world.

Through their massive No in the referendum, the Greek masses reiterated their commitment and determination not to submit to the power of European capitalism. Their determination was buoyed by popular mobilisations in solidarity with Greece led by a whole vanguard across Europe and in every big capitalist country. Amongst those involved, there were Communists, Socialists, trade unions, environmentalists, students, intellectuals and the young.

The events in Greece have contributed centrally to the breakup of the ‘great coalition’ of the EU’s institutions – mostly the Christian Democrats and Social Democrats. There are deep divisions in the Italian PD[4] and the German SPD[5]. In Belgium, the Socialists have decided to fight austerity, to support the general strikes and the mobilisations of the poor popular layers. In Britain, the anti-capitalist and anti-war Jeremy Corbyn has now won the leadership of the Labour Party. In Spain, the Left organisations are in constant advance. One big trigger for this earthquake is Greece, and more shocks and tremors are on their way.

The negotiations between the Eurogroup and the Greek government are not being equals. Instead of that, they are wars of aggression led by the financial and political power of capitalist Europe, a power that has nothing but venom to spit at a government that challenges the unchallengeable. When Syriza grew strong in the 2014 European elections, the EU and the governments of the main European countries became furious. They challenged Syriza and dared it to get out of the EU. They accused it of bringing misery to the Greek people, and they violated the democratic and sovereign right of the Greek Left to exist.

The violations increased after that. In the run-up to the Greek national elections of January 2015, Merkel, Schulz, Juncker and Hollande[6] campaigned openly in favour of New Democracy and PASOK. All this international political and media support did not help, however, as these two parties were largely trounced. Against Syriza and the first Tsipras government, Obama, Israel, the Troika and Nato organised the most reactionary campaign. It was in this climate therefore that the Greek government had to conduct its negotiations; it was also a climate of imperialist wars too: war against Russia and China, war against Iran, war against Syria, and war against the masses of the world.

Now world capitalism has Greece on the brain – this small country with a small population and a GDP smaller than that of Sao Paulo in Brazil! Of course the concern is the strategic position of Greece: Nato cannot allow that country to open a breach in the Western imperialist front.

Such were the conditions facing the Tsipras government in the first few months of its life. Later, the European Central Bank forced Greece to close its banks. The intention was to get people at each other’s throat, but it did not work. It is in this context that the errors of Tsipras and of Syriza must be seen. Their actions have not amounted to treason or capitulation so much as, essentially, to a lack of sufficient preparation.

The test of the 20 September elections

In the second legislative elections of 20 September 2015, abstentions grew from 38% (in January 2015) to 43%. Syriza lost votes and 4 seats, but the working class and a big part of the Syriza electorate did not walk away. Indeed, they kept their support for the Communist Party (KKE) and for Syriza, proof of great historic patience.

Syriza came first again this time, but its actual numerical superiority must be weighed against the 50 additional seats that are granted to the Party that comes first. To have arrived first will not serve Syriza well if this was achieved with Pasok votes, or votes more to the right. This ‘new’ electorate may tie Tsipras’ hands even more than the third memorandum which Tsipras has just signed. It is very concerning, besides, that Syriza has renewed its alliance with Anel (Greek Independents) as this draws Greece closer to Nato’s war policies instead of more accords with Russia. More such accords could  give Greece means of economic independence. As things stand, a bigger retreat could happen instead, to sow disillusion and mistrust amongst the people, or cause irreversible breaks between the principal leaders. 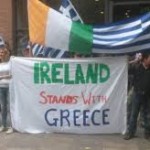 To overcome this difficulty, it is necessary to maintain and increase the unity of the Left. One must intervene to help a process of reflection in the communist KKE. The Communists may feel that their turn has arrived, now that the reformist experience of Syriza has failed. But this is a bureaucratic notion. And a useless one, because it has stopped any Government of the Left being attempted, and it stops the communist workers and the trade union movement influencing more fully the unfolding process. 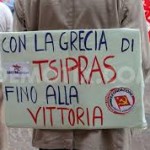 It is necessary to renew the relations with the masses, and call for public discussions in preparation for the evils of the third memorandum. Measures of popular control must be put in place to try and face down the new EU economic plans. An anti-war position must be adopted to stop Greece being drawn closer to Israel, to the United States and to Nato. The military budget must be reduced, along with the commitments to Nato. One must propose democratisation in the armed forces, mindful of the central role once played by the left military when the dictatorship and the monarchy were brought down.

A world anti-capitalist front already supports the struggle in Greece 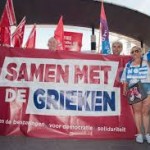 Political and organisational links must be developed with the forces that expressed their solidarity with the Greek people worldwide. There are the German Trade Union Centre (DGB) and the main Trade Unions of Britain, Belgium, France, Italy and Spain. There are also the pacifist and ecologist movements, the communist & socialist Left in Europe and the progressive governments in Latin America. A vast anti-capitalist united front has come about worldwide in support of Greece and its experience. This is important in itself, but it needs to be sustained by campaigns, mobilisations and strikes.

By taking the side of the Syriza government, Russia and China impelled Greece a lot. If they did this timidly, it is because it is not their aim to destabilise capitalism beyond a certain point. Nevertheless, the policy of Russia in Europe creates ruptures in the capitalist front and stimulates certain sectors to disobey Nato’s orders[7].

On a world scale, the Left, the workers’ parties and the workers’ centres must intervene in the internal dissensions in Greece without necessarily taking sides. The latest developments show quite clearly that there is no electoral solution. One must let the force relations weigh on the side of social solutions: dismantle the bourgeois institutions, the judicial apparatus and most of all the army. It is necessary to break with Nato; this will diminish the political domination of this organisation and save costs to the Greek treasury. An absolute priority must be to defend the social rights of the Greek people; each person must be in good health, have a roof overhead, three meals a day, and time for culture and social relations. The debt-repayments must take second place. If such social rights cannot be satisfied, then the debt must not be repaid.

Greece’s experience enriches human culture. It contributes to the will to struggle, and to the organisation of the struggle in the whole world. Capitalism realises that it is going to face grave difficulties when it tries to contain the forces seeking liberation in the Britain of Corbyn, in Spain, Belgium, France and Italy. There is a vital need to build the unity of the Left (Communists, Socialists, Trade Unions and all social movements) around a programme of social transformation to continue what Syriza and the Greek masses have initiated.

[1] The BRICS is an association of 5 ex-colonial economies, Brazil, Russia, India, China and South Africa. They have created a Bank: the NDB – the New Development Bank.

[3] The Thessaloniki Programme was presented by A Tsipras on 13 Sept 2014 to reverse austerity. It gave priority to the humanitarian crisis, sought tax justice, full employment and more direct democracy. It wanted to create a European Investment Bank. It elaborated a plan for a European kind of New Deal. It also wanted quantitative easing (money printing) on the part of the ECB and a reduction of the Greek debt on the model of the London Debt Agreement of 1953. It had a plan of national reconstruction and welfare and a certain internationalist vision.

[4] The PD in Italy: includes the Democrats of the Left (ex-Communists) and various Catholic currents linked to the old Christian Democracy. The PD is a Social Democratic Party led by Matteo Renzi (2015). It has the largest number of MPs in parliament, in the Senate and in the European parliament.

[7] This is very clear in Ukraine, for instance, where many soldiers have quit the Nato-influenced Ukrainian army to side with Russia and the Donbas workers.