Continue the struggle against austerity and for social transformation in the whole of the European Union! Build the European Left Front upon this programme!

Greece remains a centre where the perseverance of the masses of the whole of Europe is being expressed in their struggle for human dignity and their resistance to the predators of the European capitalist clique: the latter are not only the Germans, they are the French, the British, the Spanish, the Italians; masters in the United States, and in big and small States in the Eurozone. These types think that they can smash the Greek population with impunity, but a terrible boomerang is awaiting them, for it is the masses of all Europe that are under attack.

When Tsipras decided to say YES to the European creditors on July 13, he only got a parliamentary majority with right-wing votes. 39 Syriza MPs voted against, and 3 Syriza ministers resigned. This is a serious political crisis for Syriza. Before this parliamentary vote, a Syriza plenary had largely opposed the positions of the Tsipras leadership.

During the course of their negotiations with the Eurocrats, the delegates of the Greek government overestimated their ability to negotiate and manipulate the contradictions between the European governments. In the Greek leaders’ view, the weight of the “61.5% of the Greek people” who had voted NO was enough to snatch concessions, gain time and get the public debt restructured. They also relied too little on the determination and mobilisation of the Greek masses.

The Tsipras leadership did not organise or encourage the support of the population in popular assemblies, so that people should have their say at every moment in the negotiations with the European leaders. It is only after his resignation that the finance minister Varoufakis published the content of all the discussions with the Eurogroup, with the Commission and others. But the very important result here is that the idea of doing away with secret diplomacy is being raised. Down with secret diplomacy! Syriza should have adhered to this all along by opening debates (as about Plan A, Plan B or Plan C) in the Greek population and all the European solidarity movements.

Lift the misunderstandings about “the Greek People” and “democracy”

In the January 2015 elections, Syriza became the first political party in Greece. It gained 36.5% of the vote cast, with 35% of the electorate abstaining. It further benefited from the “democratic” bonanza of another 50 seats officially granted to the Party that comes first. Even with this, however, Syriza was not reaching absolute majority.

In the subsequent referendum, the vote for NO (OXI) gained 61.5% of those who took part, with 40% abstentions. There are 2 million Greeks living abroad, and only those who had returned could vote. One cannot therefore simply say that “the Greek people” voted NO. None of this invalidates the historic and political importance of those two electoral consultations, but it calls for a greater scrutiny of the real social forces inside the sectors and classes of Greek society that did not mobilise.

The working class voted NO massively, and against the absurd advice of the KKE and trade union leaderships who advised spoiling the ballots by voting YES and NO at the same time. The NO of the working class was very important, but the Greek working class is not the same thing as “the Greek people”: For others voted NO too, like the extreme right, and the centre-right of ANEL.

The petit bourgeoisie and the “middle” classes voted as much for the YES as for the NO, or abstained. In this referendum, the working class was not able to demonstrate its social capacity to lead the rest of the population.

With this referendum, the Tsipras government substituted for the need to organise the forces that had raised it up into government. A large portion of the leading Syriza comrades still have great illusions in “European democracy”, and they are not without sensing also that “the 61.5% for the NO” contains sectors of “public opinion” less resolute than may appear. Many of them demurred in front of the historic responsibility of breaking negotiations with the Eurocrats. The small group the Greek delegates keen to uphold the firmer position (of plan B) found themselves in a minority.

No doubt that the pressure exerted by NATO was terrible, with threats of civil war, military coups and terrorist acts from the fascists of Golden Dawn. This pressure was all the more effective for the way it could be driven into the Syriza government by its own ally ANEL[1] that holds key posts, as in the Defence Ministry.

The present crisis is not really due to a lack of programme because, before the elections, Syriza had a programme of many measures against capitalism and for social transformation. It went as far as to propose breaking with NATO, blocking the privatisations, controlling the banks, planning industrial and agricultural development, starting economic relations with Russia and the countries of ALBA[2], and other projects in support of the poorest in the country.

Over the last five months however, the government leaders implemented few of these proposals whilst they expected a lot from the negotiations with the troika. Even when a plan B was mooted for a partial exit from the Euro, it was not discussed beyond small committees. The alternatives that may have existed in that plan were never discussed with the population, or with the workers, in the country or in the Syriza congresses. They were never discussed in the United Fronts that were forming with other left parties, with the social movements and with the trade unions.

The factor that came to be missing in Greece was the one that the Bolivarian government of President Chavez instituted right from the start: the organisation of Missiones[3] and Popular Councils, as well as the active participation of the workers, peasants and students in the organisation of the economy, to change the corrupt institutions and clean up the army.

It is true that Greece is not is in the same situation as Venezuela: it has been part of the European Union for 40 years and part of NATO since 1952. It is totally dependent on the Euro and has no particularly outstanding natural resources. Like all the other European Union members, it had to give up on national sovereignty, and this at a [particular] geopolitical and strategic point between the European Union and Russia.

Cries of “treason” and “capitulation” are unjust

It is not just to start accusing the Syriza leadership and the Tsipras government of “treason” and “capitulation”; for this crisis in Syriza is also taking place in the whole of the European Left, in and out of the Eurozone, in Social Democracy and in the communist movements. In all the countries, there have been (and there are) constant mobilisations. There are constant initiatives amongst the peasants, the proletarians of hand and brain and the petit bourgeoisie that loses ground very rapidly. A deep revolt in the “real” world unites the majority of the population against the measures of austerity imposed by the policies of the capitalists.

The “OXI” cry is reverberating throughout Europe. This is why the eyes of the world are fixed on the hard-pressed Greek masses that carried Syriza up into government. Now everyone is reeling from the blow on the head delivered by the quick change from NO to YES by the Tsipras government. But not all is lost however. Let us draw the lessons from Greece instead of looking for “culprits” and “traitors”. This is what the Greek Communist Party is doing, along with many comrades in other European countries, disappointed as they are by the difficult situation looming.

One of the lessons to draw from Greece is how to pass from the Left government to the power of the Left. Throughout these tumultuous weeks, what lacked most was the preparation of a counter-power made of workers, the exploited sectors of the population and the marginalised. Add to this the absence of a common platform in the other countries of the Eurozone and European Union, to accompany the struggle in Greece and feel responsibility towards it.

Let us build a Single United front of the Left in Europe, with the parties, the social movements and the trade unions prepared to demand immediate measures against austerity. What is becoming every time clearer is that no country can resolve such a problem in isolation. The idea of guaranteeing economic and social progress outside the Euro is an illusion. To support “national sovereignty” with the collaboration of the national capitalists is as erroneous as any belief in the democratic propensity of the Eurocrats of the Eurozone or the European Union – for all these people are the puppets of the multinationals and of NATO.

In every country, the majority of the population suffers from the consequences of the capitalist crisis, and refuses to pay for it. A minimum programme common to all the workers and exploited masses of Europe is required. Although the standards of life differ from one country to the other, one can still defend common minimum demands: A European minimum wage, the wages to rise with the cost of living, pensions at 60 for everyone, a general reduction of the working week down to 35 or 32 hours. The defence and extension of the public services, the creation under workers control of European public enterprises, a plan of industrial and agricultural economic development for the whole of Europe and under workers and popular control; disobedience to the NATO demands, the drastic reduction of the military budgets, and the reconversion of the military industry into an industry useful to people.

[2] ALBA: Bolivarian Alliance for the People of Our America. Trade Association between the States of Antigua&Barbuda, Bolivia, Cuba, Dominica, Ecuador, Grenada, Nicaragua, St Kitts, St Lucia, St Vincent&Grenadines, and Venezuela. Haiti and Suriname may soon join. ALBA is an economic driver for continental integration. It has adopted its own currency, the SUCRE. ALBA’s initiatives include Petrocaribe, TeleSur, UnaSur – and PetroSur which is an alliance between nationalized companies of Venezuela, Argentina and Brazil, amongst others.

[3] MISSIONES: Social programmes implemented in Venezuela since Hugo Chavez, where the population intervenes alongside government bodies to fight poverty, and uphold the principles of social justice, welfare and education. 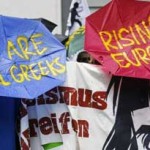