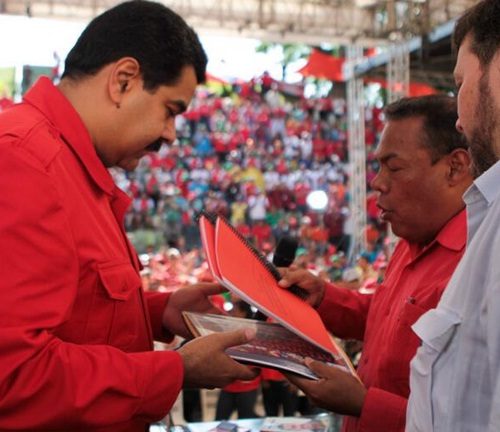 THE PSUV (UNITED SOCIALIST PARTY OF VENEZUELA, THE MAIN PARTY OF THE GOVERNMENT MAJORITY) PUBLISHES A MAJOR CONTRIBUTION BY ECONOMIST PASQUALINA CURCIO ON THE NEED TO RAISE WORKERS’ WAGES (SEE BELOW).

In Venezuela services are practically free (water, gas, electricity, gasoline, etc.) compared to neoliberal regimes. In the face of the pandemic, the Bolivarian government has taken additional protective measures for the workforce, with a ban on dismissal or eviction for unpaid rent for example. However, the direct workers’ wages collapsed when economic war started on Venezuela when the West decreed sanctions and a blockade of oil exports. This robbed the country of 99% of its resources and triggered a high level of induced inflation.[1]

President Maduro continues to encourage the development of the communes and of the workers councils. His intention is that they continue to lead the public enterprises whilst he has also appointed a commission responsible for finding an answer to the problem that the social allowances (Carnet de la Patria, CLAP, etc.) are no longer sufficient to solve the problems. In was in this context that the government TV channel VTV gave the floor to economist Tony Boza. For his part, the latter proposes to index the average wage on the Petro (a virtual currency created by the revolution to free itself from the dollar and linked to the barrel of oil.

There are those in Venezuela who sideline the wage issue as if it were not pertinent, or just one more problem among many others. They say lightly that as long as the US siege continues, not much can be done to bring the wages to decent levels. People who argue like this do not offer solutions. Faced with wage demands their answer is that “we cannot hand out what does not exist; we must produce, and for that we must work”- as if we were not all doing this every day.

There are nearly 14 million active workers in Venezuela who live, I repeat, live, on fortnightly wages. According to latest INE data[2], 92% of the workforce in Venezuela are salaried, with 3.3 million in public administration. Five million retirees live on the official minimum wage. Added together, these represents 19 million people, something like 63% of the population.

The other 37% of the population is composed of children under the age of 15 (our offspring) plus around a million unemployed. This leaves some 347,170 others who are the employers. These are the other class, the bourgeoisie.

The wage is important not just for life and the quality of life depending upon it. This is so for a multitude of people here in Venezuela and in the whole world. The wage is important too because, given a primitive accumulation of capital, and as part of the social process of work, it determines the great inequalities which result in poverty, injustice, hunger and misery. To understand how 1% of the world’s population appropriates 82% of what is produced – produced by the workers by the way – it is necessary to analyze how wealth gets distributed in the social process of work itself, and therefore how the surplus is distributed between the wage, I repeat, the wage, and profit. It is no coincidence that one of the first postulates of neoliberalism is wage freeze and price liberalization, with no other goal but to increase profit; profit being the difference between price and salary.

The question of wages is central, it not just any old one. One cannot skip over it with the repetition of monetarist dogmas according to which there is no money to adjust the wages, while in Venezuela the degree of exploitation / profit has increased by 270% in less than 4 years. The legal minimum wage meanwhile does not even cover 0.65% of the minimum material needs of the working class. Not recognizing this is paradoxical in a discourse which constantly refers to “socialism”. It reflects besides a worrying disregard for the growing gulf between wages and profits in our country; and a lack of respect for the high level of consciousness of the Venezuelan working class, spearhead of the anti-neoliberal struggles since 1989.

During the neoliberal era, during the Fourth Republic, more precisely between 1978 and 1998, the real wages or purchasing power of Venezuelan workers fell by 65%, while national production increased by 30% during the same period. There were dark moments in our economic history, because during these 20 years, the degree of workers’ exploitation by the bourgeoisie increased by 205% (BCV data, the Venezuela Central Bank).

Starting from 1999 and the arrival of Comandante Chávez and the Bolivarian Revolution, these trends started being reversed: between 1999, and more precisely 2003 and 2013, the real purchasing power of the salary increased by 77%. The degree of exploitation decreased by 38%, over that time and the economy grew by 68% (BCV data). In the transition towards socialism, Chávez struck at the heart of the capitalist mode of production, to distribute less unequally between the worker and the bourgeois, and value added in the production process. The aim was to reduce the gap between wages and profits and the unequal distribution of the produce. This resulted in a 57% reduction in poverty in our country.

First this was achieved by raising the statutory minimum wage up at food-basket level followed by price controls on the essential goods (food, drugs) whose production was in the hands of large private monopolies. Third, and this is very important – especially in inflationary economies like ours – by adjusting the legal minimum wage whenever the prices changed.

In 2013, imperialism intensified its economic war against the Venezuelan people. Among its weapons is the attack on the Bolivar through the political manipulation of the exchange rates. From 2013 until today, this has resulted in an induced depreciation of the Bolivar of the order of 3.1 trillion percent from 2013, and an equally induced rise in the prices of 63 billion percent over the same period. In this scenario, it is a fact that the increase in nominal wages remained below that of the prices. Wages only increased by 5 billion percent. For the working class, the resulting fall in purchasing power has been 99%, against an increase in the level of exploitation/profits of more than 270% in fewer than 4 years (between 2014 and 2017, and certainly more until 2021).

Today, what is being produced has declined by 64% compared with 2014. This is mainly due to imperialist aggression, but the little that is produced is distributed more unequally between wages and profits. For the workers, this translates into a deterioration in the quality of life, at the cost of a greater exploitation, consequent on the delay in nominal wage rises in the face of disproportionate rises in prices. Those who lightly ignore, or fail to understand this wages question, overlook the inequality in the distribution of the national product. The matter lies in the way production is distributed, even if production goes down. Not to mention that with a purchasing power that tending to zero, it is going to be difficult to increase production, if not impossible.

Because of our high and more-than-proven class consciousness, we, the Venezuelan workers, deserve a high-level debate on this issue. We are not satisfied with the dogma repetition in monetarist mode aimed at justifying the non-increase in wages without offering a solution. How good it would be if, in the parliamentary agenda, with a revolutionary majority, priority and importance were given to the question of wages which affects 99% of the population (27 million Venezuelans including our children) over and above the debate on the best concessions that we should still offer to a microscopic group of foreign private capitalists; for them to come to “invest” in zones full of natural riches fixed up especially for them.

Photo: Nicolas Maduro on May 24, 2014 during a national meeting with public sector workers and unions who handed him the draft of a collective contract.

[1] Induced inflation happens, for example, when State expenditure is suddenly much higher than the public income. This causes an expansion of money and credit, resulting in inflation.