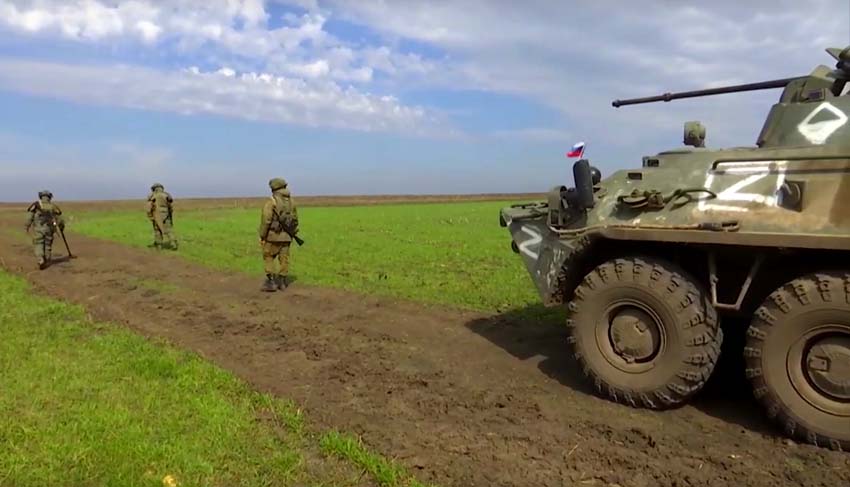 This war in Ukraine expresses the global confrontation between the capitalist system concentrated in NATO & its associates against Russia, China, the revolutionary processes and the progressive governments that defend an alternative to the capitalist regime. Russia’s military intervention in Ukraine is a reaction determined by NATO’s massive expansion aimed at strangling Russia.

To date, NATO (The Atlantic Alliance) regroups 30 US-led European and North American states and it is associated with a very large number of countries on all the continents – even Colombia, Israel or Australia. The NATO members and associates participate in what constitutes a gigantic military front on the border of what it shamelessly calls “its territory”. Ukraine is practically integrated into this device aimed at tightening further the siege of Russia, and spread from the Arctic to the Black Sea.

Nothing in this war has to do with a struggle of the peoples of Ukraine for their freedom, their integrity, their sovereignty or their democracy. Since 1997, and more specifically since 2014, there has been a special NATO program to develop military relations with Ukraine. The Ukrainian army has been completely restructured to meet NATO criteria.

This Ukrainian army is not “the armed people”. It is instructed by American and British advisers. It has been purged of all elements linked to the Soviet past, and pro-Nazi militias have been incorporated into it. Ukraine’s military budget has increased twelvefold between 2010 and 2020, reaching almost 5% of the country’s GDP, well over NATO’s own requirement of 2% of GDP for each member country.

The Ukrainian army has 209,000 active soldiers, including 102,000 paramilitaries and 900,000 reserve soldiers. Long before the start of Russia’s military intervention in February 2022, member countries of NATO and of the European Union were already sending weapons to Ukraine by the thousands. Since 2021 a European fund, hypocritically named “European Peace Facility” has already offered 5 billion euros to Ukraine, on top of another 450 million to buy “lethal” military equipment, in addition to the surface-to-air Stingers missiles, ammunition and anti-tank systems. Some EU countries promise fighter jets to support the air defence of the Ukrainian army.

Context of the war and of NATO’s expansion

The Warsaw Pact was a defensive alliance formed in 1955 between the USSR, the German Democratic Republic and the People’s Republics of Albania, Bulgaria, Hungary, Poland, Romania and Czechoslovakia. It was dissolved in July 1991, but NATO for its part did not stop expanding. It grew from 9 countries in 1949 to 30 in 2022. Composed of 15 republics – Armenia, Azerbaijan, Belarus, Estonia, Georgia, Kazakhstan, Kyrgyzstan, Latvia, Lithuania, Moldova, Russia, Tajikistan, Turkmenistan, Ukraine, Uzbekistan – the USSR disbanded in December 1991.

As far back as 2007, the Russian government had denounced the provocative character of NATO’s enlargement towards the borders of Russia. It offered agreements on the reduction of strategic nuclear arsenals in hope that the United States would do the same. Not only the European Union and the United States did not respond, they redoubled their pressure on Ukraine to draw it to their side. Russia’s military intervention this 24 February 2022 is therefore the logical – and pre-announced – response to these NATO provocations.

The 2014 “Maidan uprising” was not a “revolution”. It was a coup promoted by far-right militias then getting organised in Ukraine, previously supported and prepared by NATO. This US-orchestrated coup forced Yanukovych to resign and go into exile. Several governments followed one another and deepened their relations with the European Union and NATO.

Faced with these government changes in Ukraine and their incorporation of the extreme right-wing, Russia promoted a referendum for the independence of Crimea in which the population decided by 91% to join the Russian Federation. This was a very important decision because the base of Sevastopol on this peninsula is a fundamental port for the Russian fleet.

The Minsk Protocol (capital of Belarus) – was signed on September 5, 2014 by representatives of Russia, Ukraine, France and Germany. There, the Ukrainian army promised to end its war on the Donbass Republics on condition that Russia did not send troops. On February 12, 2015, the Minsk II agreement was signed. Russia undertook not to intervene militarily if France, Germany and the OSCE (see note) helped to put a stop to the Ukrainian army’s attacks on the Donbass populations where the two People’s Republics of Donetsk and Lugansk demand autonomy and recognition.

The sharpening of contradictions within the NATO members’ countries

The intervention of the Russian army this February 2022 was in response to the very large offensive that the Zelensky government was preparing against the Donbass – violating, one more time, the Minsk agreements which it had never intended to respect. After the reunification of Crimea with Russia (26.4.2014), the Ukrainian army led by neo-Nazi battalions started a war against the People’s Republics of Donetsk and Lugansk where they killed 14,000 people.

NATO has started an arms race in which Germany takes the lead with the investment of 100 billion euros to modernize its own armaments. Other arms race examples are given by Finland which abandons its neutrality and buys 64 F-35s from Lockheed Martin, to participate in the encirclement of Russia, followed on similar paths by Switzerland and Sweden.

In the Nato countries, this arms race will prejudice investment in public services, social security, education, health care, environmental improvement, decent housing for all and the fair redistribution of wealth. It is going to roll back the social gains and the rights of the working class.

The economic sanctions that the NATO members and partners have slapped on Russia are the toughest ever imposed on any nation. But these penalties are going to hurt the countries of their originators, many of them in need of the Russian exports. The shortage of wheat, potash, gas, oil, palladium, nickel and other minerals is going to hurt the European and North American economies.

As far as it is concerned, Russia is practically capable of facing the sanctions. This situation is going to accelerate Russia’s need to improve the intervention of the State in the economy – to get rid of the “oligarchs”, exercise greater control over the banking sector, overcome the country’s dependence on the dollar. The end of the “dollar era” will be received by the United States as a declaration of war. But what arguments will they be able to find, seeing that it is them who launched the sanctions!

NATO uses Ukraine as spearhead to divide and break up the Russian Federation. The present confrontation forms part of the war preparations of imperialism – one more step towards the final settlement of accounts of the masses as a whole, against the capitalist system.

This war is also a shock for the entire global left, the parties, the trade unions, the social movements. It has brought to light the great confusion and lack of preparation to organize a global response to this crisis of disintegration and lack of prospects for capitalism.

The medias tried to impose the single thought of imperialism, but part of the vanguard stayed informed through other and unconventional channels, about the true causes and consequences of this conflict. It should be kept in mind that conflict resolution is not only military but also social and political. It is important to call on people to organize, like the port workers in Italy, Greece or France who refused to load ships with military equipment for Ukraine.

Demonstration in New York against NATO on February 19, 2022

History shows us, with growing insistence, that in the face of the crisis of capitalism, there is no other way but social transformation.

The coming NATO summit in Madrid in June 2022 will discuss its new strategic concept “NATO 2030” which focuses mainly on attempts to destroy Russia and China.

We must organize the broadest front for a counter-summit with a common platform:

§ Drastically reduce the military budgets of each country,

§ Oppose all arms dispatches and troop shipments to the Zelensky’s army,

§ Break with NATO and dissolve this organization.

The feature Image: Russian and Donetsk’s soldiers clear the mines so that crops may be sown, April 2022

Note on the OSCE:

“Sanctions against Russia will strengthen us instead of harming us. They will mean a blow to the global economy as a whole, an economy they are manipulating and profiting from. This time they will no longer totally control it, it will slip out of their hands, and now it is above all the Europeans and the Americans themselves, their own citizens who will be affected by the increase in the price of petrol, energy, food, and by the loss of jobs.

Citizens of Europe and the United States, it is not true that your problems are due to “hostile actions” by Russia. No! They are due to the irrational and irresponsible actions of your leaders, who dare finance with your own money “the fight against the mythical Russian threat”. (…) The West is trying to sow discord between Russians by betting on treason. They want to try and pressure us once again, make of us a weak and dependent country by violating our territorial integrity, by dismembering Russia; they won’t get anything for all that, so the West will bet on the so-called fifth column, on the traitors, but those who make money here, will die there.

Russia has all the natural, material and human resources that emerging nations need; the West has nothing left to give except theft, everything has been looted, wasted; they keep only the benefits and the need to break the growth of these emerging nations. This is the reason why there commences inevitably a new economic and commercial system which is going to prosper, a system in which the world will have the guarantee that its wealth will not be arbitrarily pillaged, where it will be able to negotiate and exchange in a transparent, natural and secure way. Russia has always contributed to the development of human civilization; this time will be no different. Russia has always been part and will always be part of history…”.