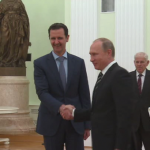 The meeting between president Assad of Syria with president Putin of Russia[1] is a very important step in countering Western imperialism, its Islamist-fascist bands and their reactionary allies in the Middle East. Whether the left movements of the world “favour” or “reject” Assad and Putin, force is to recognise that the present action of Russia in Syria is the one factor that allows, and will allow, to strike effectively at the expansion of the Islamist State (IS)[2]. And this not just in Syria, but in Iraq, the Near East, the Middle East and North Africa.

The ongoing war in the Middle East is escalating towards generalised war. It is an accelerating struggle, ‘camp’ against ‘camp’, on a world scale. The basic cause of it all lies in the crisis of the capitalist regime as a whole, and as a system – but beyond its deepest economic, financial and social crisis, the sharpening mayhem comes from capitalism’s awareness that it has lost the domination of the world.

The “end of history” has not ended the masses’ struggle

Capitalism witnesses the demise of its unipolar world – a world dominated by the big imperialist powers in the wake of the dismemberment of the Soviet Union, the disintegration of the Workers States in Eastern Europe and the dissolution of the Warsaw Pact. The “end of history” marked an important regression, but it was not the end of the struggle of the world masses. These continued to win revolutionary, social, economic and political gains, as in Latin America, and the capitalist system was unable to incorporate them in any perspective of progress within its regime.

Any progressive step now comes face to face with the antagonism of private property, unbridled competition, the world concentration of capital and its implacable race for profit.

In the last few years, Africa, the near East and the Middle East have been the scene for the most tragic confrontations caused by Western capitalism seeking to impose its so-called democratic model upon them. The Arabs Springs turned into terrible and murderous winters and ferocious battles were caused by the imperialist powers wanting the profits and the mineral riches of those countries: Iraq has endured more than 20 years of wars at the hand of the NATO backed USA and Britain. Libya was destroyed by NATO bombings. Israel has locked up the Palestinian population in an immense concentration camp. Afghanistan has now been 15 years under occupation by NATO military forces which, far from withdrawing, are now arranging the return to power of terrorist Talibans.

In Russia’s global intervention “against the terrorists” in Syria and the Middle East, it is entirely justified to identify as ‘terrorists’ the armed bands extending over Syria and Iraq. For who are the “moderate rebels” that the Western coalition supports? If they are not al-Qaida and al-Nusra, who are they? Or have the latter suddenly become more ‘moderate’ than the Islamic State (IS)? Mercenaries from Chechnya and Georgia are involved as well, but like all the above, they have been propelled, financed, armed, tele-commanded and advised by NATO’s special services. These groups are fabricated by NATO and the likes of Israel, Saudi Arabia, Qatar and the United Arab Emirates. They must be characterised as fascist even if they brandish “Islamist” banners. By helping them to set up rapidly and multiply, the main Western powers try to compensate for their inability to raise from their respective countries masses of soldiers ready to fight for the West. But people are against war in those respective countries! From the war on Vietnam to the war on Iraq, how many American soldiers deserted?

In the most recent war on Afghanistan, NATO had no infantry of its own ready for the sacrifice. Billions of dollars were used instead, to create from top to bottom an “Afghan army” of 300,000 soldiers – and then what happened? The dollar manna and the supply of foreign advisers lessened, and the “Afghan army” deserted wholesale. This is why NATO concentrates its efforts on creating Rambo armies with the most sophisticated weapons and “Very rapid reaction force” written on their badges. This is also why NATO specialises on the development and “modernisation” of fighter aircrafts, atomic bombs and missiles, drones in quantity and mercenary armies like IS.

The ‘Coalition of the Willing’ aims at Russia, not at IS

At the end of 2014, the “Coalition of the Willing to Fight IS in Iraq and Syria” was created by NATO, its allies and the most reactionary countries of the Middle East. And then what happened? IS got hold of enormous territories in spite of the ‘coalition’ apparently bombing it thousands of times. What is the coalition bombing then? We are told that it fights IS, but this is double talk because Syria has been made unliveable by bombings aimed at liquidating Bashar al-Assad! And it is mercilessly that the coalition bombed the zones where the army loyal to Bashar al-Assad has been fighting and resisting. The Syrian Observatory in London – not known for pro-Assad sympathies – reports that 90,000 Syrian soldiers have died to date, this being about half the number of the Syrians registered dead. In truth, the NATO coalition has protected the advance of IS, and its expansion from Iraq to Syria, and onwards to North of Africa.

The NATO coalition and its retinue of IS mercenaries was after breaking the alliance between Russia and Syria. But this alliance comes from way back, from the Soviets’ military bases in Lattakia and Tartus. Now NATO tries to do the same in Ukraine: it pushes its frontiers Eastwards with the aim of surrounding Russia, throwing it out of the Mediterranean and stopping any alliance between Russia and independent Middle Eastern countries seeking liberation from Western domination.

The Syrian masses support their State because it is progressive

The decision of Russia to pull the rug from under the NATO coalition rises from the deepest motives of a people that is not just “Russian” but very “Soviet” too. The army of Russia is the sector of the Russian leadership that best expresses this soviet sentiment in the people. The Russian military sounds the alarm, and the present political leadership, with sectors led by Putin, hears the echoes. In Syria, they planned their military and political offensive jointly. This is going to make short work of the barbarian IS. And the NATO coalition will have no option but to negotiate with the government of Bashar al-Assad.

And so the question is now: why wasn’t the “moderate opposition” capable of overthrowing Assad in spite of the enormous aid it received from the European Union and NATO? The answer is that Syria under the presidency of Bashar al-Assad – just like Libya was under Gaddafi – is amongst the most advanced countries in the region. People support it for its economic and social achievements, for its way to distribute the wealth, and for saving the national resources from imperialist and multinational clutches. After four years of raining bombs on Syria, the NATO’s tele-commanded international coalition threw its IS mercenaries against that country, and still it could not liquidate the Syrian State or the government of Bashar al-Assad.

Homage must be rendered to the Syrian masses above all. In their majority, they did not flee their country. They did not surrender to IS or to NATO either. They are still fighting to defend their country. It has been four years now that the army of Syria has fought courageously to defend the Syrian State and the government of Bashar al-Assad; had the latter been the “murderous tyrant” and the “ferocious dictator” we are told about, they would have embraced the war to get rid of him.

An international anti-imperialist front is evolving in the process of this war on Syria. The staunch decision of Russia to intervene militarily to crush IS and assorted mercenary groups, not only strengthens this anti-imperialist front but contributes to it. The same goes for the political firmness of the Putin presidency, as it forces imperialism to include president Bashar al-Assad in the negotiations. The same goes also for the joint intervention of Russia and China in this matter, and the support they receive from the Latin American countries that belong to ALBA and UNASUR[3].

Russia and China count on some support from the Iraq government, along with the direct politico-military participation of the Lebanese Hezbollah, the Iranian Guardians of the Revolution, plus some Kurdish groupings in Iraq and Syria. In Europe and the United States, strong movements are growing against any war on Syria, and against the direct involvement of their governments in the NATO coalition.

An anti-imperialist front is being formed internationally in the course of this war in Syria, and Russia’s firmness reinforces it.

[2] The Islamic State is not a State at all. It is composed of groupings of mercenaries supported by imperialism. They are sometimes called IS, or Daech, or ISIS.

[3] ALBA and UNASUR are associations of Latin American countries. Cuba is in ALBA for instance. UNASUR is formed of the governments of Argentina, Bolivia, Brazil, Chile, Colombia, Guyana, Ecuador, Uruguay, Paraguay (?), Peru, Suriname and Venezuela; it deals with the integration of Latin America, trade relations and continental security against imperialism. It has growing links with Russia and China.