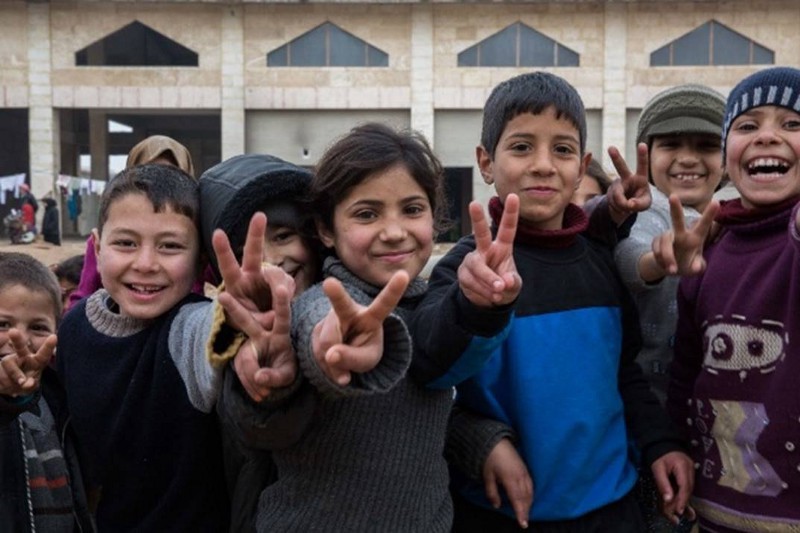 WE RENDER HOMAGE TO THE SYRIAN PEOPLE: A people that stood up to the attacks of imperialism, of terrorist groups, of Saudi Arabia and of Israel. A people that has understood how much the future of humanity is at stake in Syria.

The world situation changed remarkably following the liberation of Aleppo. You could say that the battle for Aleppo has been a small Stalingrad. This victory is going to inspire big changes in the Arab countries and in Iran. It is going to influence the relation of world forces. The Yankees and their Nato allies invaded Afghanistan and Iraq, then destroyed Libya, but the resistance of Syria proclaimed: “No Pasaran!”. Because this resistance gave confidence to Russia, Hezbollah, Iran and China, these decided to intervene. And as they became committed in Syria, it was not just through military and economic aid, but on the battleground, by the side of the Syrian battalions.

This war has also involved the violent aggression of the media. Left-leaning journalists worked hard to expose the lies, and in spite of its cover of lies, imperialism failed to enlist popular support behind its pretend ‘liberty and democracy’ humanitarian campaigns. In Aleppo, the forces of the imperialist coalition have been roundly defeated: militarily, politically and socially.

The decisive role of Russia:

In the face of changing situations and moments, Russia  reacted confidently to thwart all the attacks and blockades against it. It was particularly good at dealing with the mercurial Turkey of Erdogan. Only a few months after Turkey had shot down the Russian plane[1] and a few days after the murder of the Russian ambassador in Ankara[2], the Turkish government decided on a pact with Russia for a Syrian ceasefire. By the side of the Russian and Iranian armed forces, the Syrian soldiers not only retook Aleppo-East, but captured ten Nato soldier-trainers of Al Nusra. France demanded an emergency meeting of the UN Security Council, but it did not get the backing.

Profiting from this state of weakness in the Nato countries, Putin announced the start of ceasefire talks (controlled by Syria, Russia, Turkey, Iran and their allies), and from where IS (Daesh) and Al Nusra[3] would be excluded. In all this region of the Middle East, Russia is becoming the arbiter and the political centre.

It is now clear that the United States were among the main supporters and suppliers of arms and money to the terrorist militias. In the Turkish airports controlled by Daesh, US planes used to land, bringing weapons, funds and medicines. Through the porous Turkish frontier, mercenaries, weapons and lorries used to cross, unloading in the Daesh controlled-areas of Turkey the petrol that they had stolen in Syria for re-sale in Turkey. Erdogan’s daughter was in charge of a hospital that nursed injured Daesh fighters on the Turkish-Syrian border[4].

When Turkey entered the fight, it did not seriously attack the Daesh zones. It concentrated its fire on the Kurdish areas instead, and the PKK[5] militias. Meanwhile, it was signing accords with Barzani [6] – president of the Iraqi Kurdistan – to put down the left-wing Kurds in that particular border zone.

The victory in Aleppo has changed the force relations in the world:

In this phase of the war on Syria and Aleppo liberated, the United States have lost the initiative. And they find themselves shut out of important decisions.

We are not witnessing here a defeat just of the United States, but of Israel and of Saudi Arabia above all. The latter must deal with a serious economic crisis. It has not managed to defeat the Yemeni peoples with its war against them. The Saudi soldiers have shown little ability to defend their frontiers. This change of situation in the Middle East is going to encourage the whole world, the left-wing movements in Europe, those in Africa and in Latin America.

[2] The Russian Ambassador to Turkey Andrey Karlov, was shot dead in Ankara by an off-duty Turkish policeman on 20 Dec 2016.

[4] The daughter was Sumeyye Erdogan; and Bilal, her brother, was funding ISIS.

[5] The Kurdistan Workers Party, with Communist origins, started an armed struggle for an independent Kurdistan in Turkey in 1978.