“HELP SYRIA” posits a return to ‘humanitarian war’ – Several associations of the peace movement in Belgium co-signed an Appeal entitled: “HELP SYRIA” just before the liberation of Aleppo by the forces of the Syrian government and their allies.

This Appeal was asking from the Belgian government to send “humanitarian aid” to civilians and “combatants” in Eastern Aleppo, allegedly to prevent their “total wipe out”. We hope that the well-intentioned militants in those associations will look at the real facts, and value the truth; because this last minute Appeal for “humanitarian aid” works like a ploy to keep the war going without end.

Here are some arguments in the Appeal:

“The last inhabitants of Aleppo risk being wiped out in the coming hours or days. To avoid mounds of dead bodies, and others drowned in the Med, we must demonstrate our indignation to the Belgian and European authorities… ”

“We propose to address this signed petition to our [Belgian] authorities, so that our government exerts pressure:

– to bring to justice any perpetrator of such violations” (read complete text on www.helpsyria.be)

A particularly misleading picture illustrates the HELP SYRIA’s Appeal: It shows fathers carrying babies, perhaps dead, along a road full of the ruins of bombed-out houses. On seeing this, you cannot but develop a feeling of human sorrow; but this feeling gets manipulated by the enormous lie contained in the caption on the photo: “The last people of Aleppo may be wiped out in the coming days”.

But Aleppo has just been liberated!

Hundreds of thousands of people in Aleppo have just been freed, and cared for, by the Syrian government and Russia, along with their allies. How come HELP SYRIA accuses them of perpetrating civilian massacres and of flouting international humanitarian law? Surely these liberators of Aleppo-East must be lauded for having broken the grip of the terrorist groups, and freed the town! Shouldn’t we acknowledge that they had the civilian population evacuated, and humanitarian aid brought to them? The sponsors of HELP SYRIA pose the contrary. Their Appeal continues to consider Bashar al Assad as their worst enemy, and the Russian intervention in the Syrian war as the greatest threat to world peace.

HELP SYRIA wants the “combatants” placed under UN protection. But what is their justification for re-labelling the Islamic State (IS) militias and other mafias as “rebels” and “combatants”? Since 2013, these have been occupying one side of Aleppo to rain bombs on the civilians of the other side. All the relevant witness-reports from Aleppo-West were deliberated sabotaged in the media, and for many years, they were ignored by the “humanitarian” associations. The latter will find, however, that no rebranding of the IS war criminals as “combatants” can exonerate the latter of their crimes. These people cannot be put on the same plane as the Syrian government’s soldiers, because these fight in defence of the sovereignty, independence and integrity of their country.

The Appeal calls on war-criminals to protect the Syrian civilians!

What do the authors of the Appeal actually propose to have the 5 years of war in Syria come to an end? They call on the Belgian government, and on European authorities! But the Belgian government was party to the “International Coalition of the Willing” since the start of the war on Syria – after having done much of the same in Iraq. The authors of the Appeal call on the European Union. But the European Union is busy reinforcing its links with Nato. It collaborates in all the Nato’s wars.

How does so much concern for “the protection of civilian populations” ends up trusting in those who accompany, support or feed the wars on those populations? This amounts to reviving the principle of ‘humanitarian intervention’ – with war included in it. How can anyone justify this, after 15 years of Nato’s such ‘interventions’ and with the military occupation of Afghanistan? How can peace associations defend this now, after the 5 years of economic, political and social chaos perpetrated in Libya by the same Coalition? How do they allow themselves to fall again for ‘humanitarian war’? 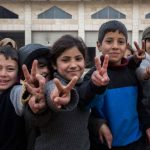