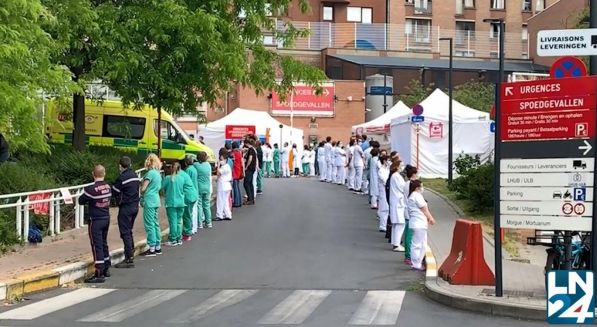 THE COVID-19 HEALTH CRISIS, EXPONENT OF THE SERIOUS ECONOMIC, SOCIAL AND POLITICAL CRISIS OF THE COUNTRY’S CAPITALIST LEADERSHIP. BELGIUM HAS BEEN WITHOUT A GOVERNMENT FOR MORE THAN A YEAR. INDEED, ALREADY IN DECEMBER 2018, THE RULING CENTER-RIGHT COALITION [ALLIANCE BETWEEN NVA (FLEMISH NATIONALISTS), THE OPEN VLD (FLEMISH LIBERALS), MR (FRENCH-SPEAKING LIBERALS) AND CD&V (FLEMISH CHRISTIAN DEMOCRATS] BROKE DOWN FOLLOWING THE SHATTERING RESIGNATION OF THE NVA. THE LATTER HAD REFUSED TO SIGN THE MARRAKESH PACT (A PACT ON GLOBAL IMMIGRATION ISSUES, 2018).

Since then, 2018, a minority alliance led by the liberal Charles Michel governed the country in “current affairs” pending the results of new elections. These elections took place in May 2019, but they did not resolve anything. The balance of power remained more or less the same, albeit with one peculiarity : the strong growth of the radical left (PTB-PVDA in Flanders and Wallonia) and that of the Flemish extreme right (the Vlaams Belang).

Since May 2019, the ‘current affairs’ government of Charles Michel takes measures favourable to the “regionalization” of several important sectors of the economy and of social life. It continues with important NATO commitments and policies of war. It takes part in international coalitions said ‘to be fighting terrorism’. It has extended the duration of the country’s participation in the war in Afghanistan. It accepts participation in the big military manoeuvres against Venezuela. It accepts to purchase new F-35 fighter planes, maintain and modernise the atomic bombs in Kleine Brogel, take part in Defender 2020,  etc.

“Regionalization” goes hand in hand with the increased privatization of public services – Social Security essentially included. The ‘current affairs’ government is a government of ultra-liberal policies and significant restrictions on the democratic rights.

The dismantlement of the public services and their growing privatisation have had disastrous consequences. This is especially so in education (from nursery school to university), in the Social Security sector and in the organization of Health Care. Hospital workers have been many times on strike against the “mergers” between public and private hospitals, favouring the latter. The qualified personnel have been decimated by cuts, the excessive exploitation of the nurses, the cleaning staff, the doctors, the surgeons. Medical specialists of the former socialist countries of Eastern Europe were lured into the country instead, seeing that they would do the work for less money.

The same happened in the “rest homes”, helping to explain the very high number of people who have died there from the virus. There, the priority is “profitability” at all costs. In the hospitals where the elderly are not welcome for “ordinary” care – this not being profitable enough – the “geriatric” wards have been reduced to a minimum. The inevitable result has been a large number of elderly persons in the publicly owned nursing homes for people of lesser means. There, the allowance these persons receive from their local authorities serves to pay their rents in the nursing homes. This interests the nursing homes, but it does not interest the hospitals, because from the private-interest point of view, this does not return enough money.

This was the situation when the Covid-19 pandemic reached Belgium, causing a health crisis. In all the countries of the world where the populations still suffer oppression and capitalist crisis, this pandemic upheaval has brought to light, and greatly accelerated the social, political and economic crisis of the world capitalist system.

It is not like saying that there was life “before covid19” and there will be life “after Covid19” – making of the virus the enemy against which it was necessary to make war – as in the “pre-war” and the “post-war”. We were in the capitalist regime yesterday, and we will still be there tomorrow if we don’t manage to build a resolute left front for very radical measures of social transformation.

The present pandemic has not produced the same effects everywhere in the world. The differences that have appeared do not necessarily separate the “poor” countries from the “rich” ones. In “poor” countries (in terms of average GDP) such as Cuba, Venezuela and Vietnam, very few people died from the coronavirus. In a “rich” country like Belgium which has 11 million inhabitants like Cuba, the death toll in is nearly 10,000 in Belgium [and only 84 in Cuba].

What best explains this difference in Cuba is the way the population has been able to organise its response to the pandemic. Collective social organization has done this. In the three countries we have named, the health services are not simply “performant”. They are operated by the majority of the population, and in conditions where the State pays the greatest of attentions, un-corrupted by any race for private profit, commercial rentability or the domination of big pharmaceutical consortia.

The other important factor that affects the “rich” capitalist countries is the enormous and continuing deterioration in the living conditions of the majority of the population. The media seem to discover that there are really a lot of people on the brink of destitution in Belgium – impoverished workers who have lost the little job they survived on. In Belgium as in other so-called “rich” European countries, the informal economy – another word for moonlighting – involves hundreds of thousands of people. This includes the undocumented, the homeless, the asylum seekers, the refugees awaiting regularization. Hundreds of thousands of young people are in precarious jobs, part-time, or less than that. More or less hidden up to now, this huge precariousness comes suddenly to light with the late and hasty confinement imposed on people. For a family with children, life in a large 4-facade house with garden and swimming pool, is not the same as in a three-room apartment in town.

The pandemic has also revealed the deep carelessness and arrogance of this minority government of Charles Michel. In march, the Liberal Minister of Health was saying that covid-19 is just a little flu, that it was not her fault that we lacked masks, respirators and tests; it was the fault of the previous governments which, since the avian flu crisis, had built no strategic reserves. The political leaders in Belgium and Europe became somehow convinced that this pandemic was not going to catch up with them – them being people who sit at the top table of medical knowledge.

A shadow government and right-wing parties, both Flemish and French-speaking, were eventually forced to form a government with “special powers”. The latter included a wide range of parties, from right to left, but uniquely to deal with the health crisis, under the control and guidance of a National Health Council. In that Council, there were quite a few left-wing reformists, Socialists, Ecologists. Their watchword: “Health first”. Several of the scientists, experts and media spokespersons on that Council, took publicly example on China, Cuba and Vietnam, highlighting the collective consciousness of the populations there.

The economic crisis is not the consequence of the pandemic. The latter made the crisis clearer. All that the pandemic did was to accelerate the process of mergers and business combinations, the liquidation of the smallest enterprises. But the right wing of this government did not fail to repeat after the sacrosanct employers’ associations, both Flemish and French-speaking: “No health possible without reviving the economy. The economy first therefore”.

As in the other industrialized countries of Europe, big business refused to shut down the companies. It insisted on the workers continuing to turn up for work, with the threat of the sack against who dare refuse. On the part of the workers, it took a very strong mobilization to get safety measures in place before returning to work, sort out the furlough settlements with part payment by the boss, avoid the risk of dismissal, get the 70% of the wage guaranteed (in principle…), the obligation for the boss to take back the furloughed, and other such measures.

Beyond this, the pandemic has revealed and highlighted the existence of very powerful popular forces. There have been 10,000 deaths, mostly in the nursing homes, due to the impossibility for the health workers to cope suddenly with such a disastrous situation, the result of years of right-wing governments. But thousands of persons went sick into the hospitals and came out of them cured. This could only happen because, for almost three months, the health workers gave their days and their nights. This could also happen because these workers forced the private hospitals to organize with the public ones to get everyone treated equally.

Thousands upon thousands of solidarity demonstrations took place. From the applause and the improvised concerts at the windows in some areas, to the spontaneous mutual aid between people in the houses and the streets of the cities. The creative workers of culture worked incessantly, affected as they were themselves by the confinement and the bans on public gatherings. They helped maintain the good understanding between people and shared in the pleasure of feeling together even when “social distancing”.

The inability of capitalism to restructure the economy is evident in the eyes of growing sections of the population. It is important to support and strengthen the front of the left that is being formed, at the level of the whole country.

For a left front with a program of social transformations for the whole country, the European Union and the whole of Europe!

Note: the featured image is that of the personnel of the Hospital St Pierre in Bruxelles, turning their backs on the visiting Prime Minister Sophie Wilmes on 16 Mai 2020, to protest the incompetence and the arrogance of the government. 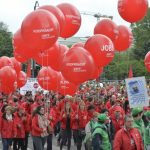